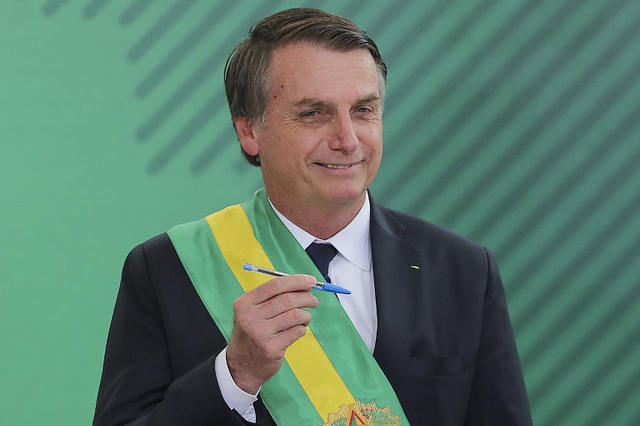 Extreme right-wing Jair Bolsonaro assumed office on January 1 in the capital Brasilia in one of the highest security forces deployed events since the 2016 Olympic Games and the 2014 World Cup. The spectacle was attended by emblematic politicians of the global right like Israeli prime minister Benjamin Netanyahu and the Hungarian premier Viktor Orban.

In Bolsonaro’s address, he reaffirmed campaign promises like his support for civilian gun possession, the agribusiness sector and privatization of public companies. He stated that Brazil was now “liberated from socialism” and that he would rescue the family, restore Judeo-Christian values and combat gender ideology*. This vague-ish sounding rhetoric with undertones of homophobia, anti-left and anti-communist sentiment is classic of the rising right in Latin America, the strong influence of the Evangelical Church is palpable.

However, now that Bolsonaro is president, his words are more than just threats. They are policies, decrees and laws, that seek to strip the Brazilian people of their rights, land and public companies.

Just hours after his inauguration, Bolsonaro announced a series of decrees through the Provisional Measure n.870, as well as three other decrees that make changes to the institutional structure of the Brazilian republic. He eliminated seven ministries: Transportation, Ports and Civil Aviation, Industry, External Trade and Services, Sports, Cities, Culture, Work and Public Safety.

The measure also announced that the regulation and creation of new indigenous reservations and quilombolas [ancestral Afro-descendent territories] is now controlled by the agriculture ministry – which is heavily influenced by the powerful agribusiness lobby. The demarcation of Indigenous land was carried out by the National Indian Foundation (Funai) for the last 30 years and the change puts Indigenous and Afro-descendent territories at great risk for greater exploitation and appropriation by national and transnational companies.

He wrote on twitter “More than 15 percent of our national territory is demarcated for indigenous groups and quilombolas. Less than 1 million people live in these isolated territories, that are, in fact, exploited and manipulated by NGOs. We will assimilate these citizens and value all Brazilians”.

The measures also stipulate that the Secretary of the Interior will “supervise, coordinate, monitor and accompany the activities and actions of international organizations and non-governmental organizations in the national territory.” (emphasis added). Many national and international organizations have denounced this measure as it could pave the way for restrictions on freedoms of these organizations. This plus Bolsonaro’s statement on twitter that NGOs are “manipulating” indigenous and Afro-descendent communities, shows that there will likely be growing tension.

Minimum wage also fell 5.4% at R$998 which is less than the amount passed by the Congress and by the previous Michel Temer government which was R$1,006.

Minister of Justice Sergio Moro, the judge who led the legal crusade against former president and current political prisoner Luiz Inácio Lula da Silva and effectively eliminated him as a presidential candidate, has acquired a super ministry under the new measure and his powers have multiplied. As the Ministry of Work was eliminated, Moro’s ministry will be in charge of the legalization of trade unions. The Ministry of Public Safety was also incorporated into his super ministry, as well as the Council of Control of Financial Activities, a body which analyzes suspicious financial transactions.

The expected attack on LGBTQ people in Brazil also came swiftly. The Ministry of Human Rights, Family and Women, which is led by Damares Alves, an Evangelical preacher, will no longer consider issues of the LGBTQ population and no other ministry has been given the task. In a video of Alves on January 3 she proclaimed “Attention, attention! A new era begins. The boys dress in blue, the girls in pink”.

This provisional measure is likely a sign of stronger measures that are yet to come. It is also an affirmation that despite claiming to be an anti-system politician fighting for the people of Brazil, Bolsonaro represents the interests of the powerful sectors.

João Pedro Stedile from the National Board of the MST stated: “All of the grassroots of the MST is aware that we have to be careful, to not expose oneself to this hateful propaganda, but this should not be a motive to be afraid, we are waging a struggle so that our people can improve their conditions of life”.

*Gender ideology is a made-up term that made its debut in Colombia in 2016 used by the ‘No’ campaign in  the referendum on the peace agreements between the Colombian government and the guerrilla group Revolutionary Armed Forces of Colombia. The ‘No’ camp which had support from large sectors of the Evangelical church, large landowners, and the extreme-right political parties, spread mass misinformation that the peace agreements sought to promote homosexuality, contained a “gender ideology” and would destroy children and families. The reality was that the agreements had an official recognition that the armed conflict disproportionately affected women and people from the LGBTQI community. This campaign of hatred, fear and misinformation was successful, the ‘No’ vote won and the peace agreements were not approved. Today, the ‘imposition of a gender ideology’ is a discourse used by conservatives across Latin America to express their rejection of movements, programs and policies that advance women and LGBTQ people.