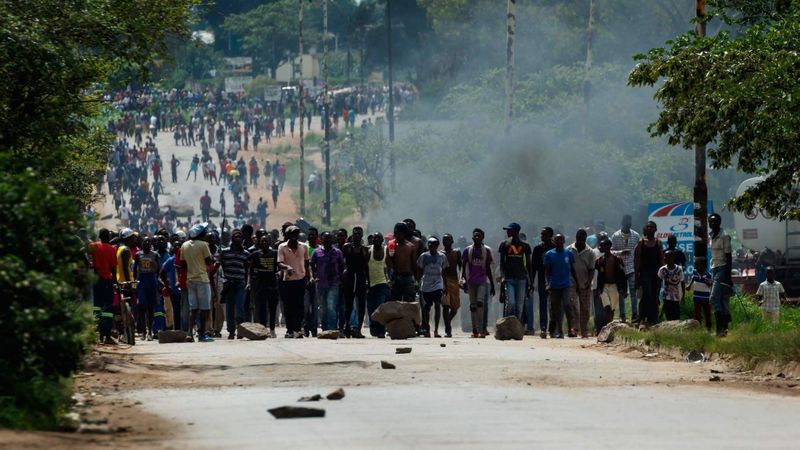 With the price hike, Zimbabwe now has the most expensive fuel rates in the world.

For the second day in a row, Zimbabwean security forces on Tuesday unleashed repression on the people following a mass protest against the increase in fuel prices. On Monday, the police had fired against protesters, leading to five deaths. The protests began after the government more than doubled the fuel price. A liter of petrol now costs $3.11 and gasoline costs $3.33. These prices are the most expensive in the world. Following the announcement, the Zimbabwe Congress of Trade Unions gave a call for a three-day national shutdown. The country is in the grip of a severe economic crisis that has left the masses of people – including professionals like doctors and teachers – unable to afford basic essentials.

As many as 26 protesters were injured from gunshot wounds and over 200 arrested on Monday, Zimbabwe is witnessing its worst unrest since the post-poll election violence last August. Many of those injured in the crackdown by security forces have not yet been to hospitals because they fear arrest. Last night, the offices of the main opposition party, Movement for Democratic Change, in the capital city of Harare were also reportedly set on fire by angry demonstrators.

The assault continued on Tuesday. “There is a widespread military operation in Harare’s townships (especially DZ and Chitingwiza) — soldiers are beating people up, going door to door, kicking down doors, dragging people out of their homes,” a human rights activist tweeted.

While the streets of Harare remained deserted on Tuesday, protests erupted in the country’s second largest city, Bulawayo, about 430 kilometers to its south-west. In this stronghold of the ruling opposition, the police cracked down on the demonstrations using tear gas after the protesters chanted slogans calling for removal of president Emmerson Mnangagwa. Numerous reports indicated instances of looting and tyre burning.

In an apparent attempt to prevent violent outbreaks and channel the mass anger into industrial action, ZCTU tweeted, “Today it’s day two of the shutdown. We urge workers and citizens everywhere to stay at home. Our struggle is genuine and there must be economic reforms for the poor to survive.”

However, the tweet many not be accessible to many because the government partially shut down internet access. In most parts of the country, schools and businesses remained shut and public transport was off the roads.

In the meantime, president Mnangagwa has left the country, and is on his way to to Davos, Switzerland, to attend the World Economic Forum.