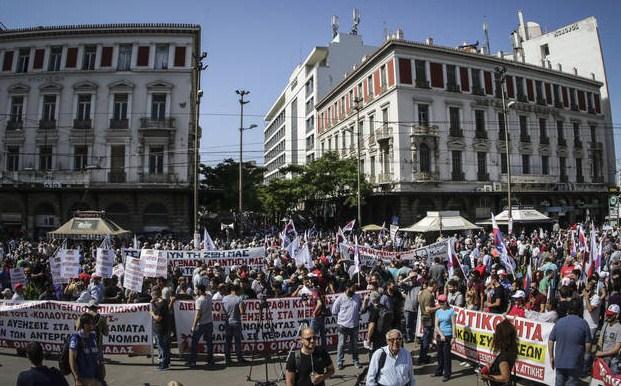 The police attacked striking teachers on January 11 and January 14.

On January 14, for the second time in a week, riot police in Greece attacked primary school teachers who were on strike. The police fired tear gas shells on the protesters who were marching to parliament. They were objecting to a bill by the government to hire teachers on a contractual basis. Reuters reported that more than 3,000 teachers participated in the march, carrying banners that read “Permanent hirings now!”

A similar attack on the striking teachers took place on January 11, injuring among others, a member of parliament from the Communist Party of Greece (KKE) and a teachers’ union leader.

Peoples Dispatch spoke to Chrisoula Lampoudi, a teacher, a member of the All Workers Militant Front (PAME) and vice-president of the World Federation of Teachers Unions on the nature of the government’s proposals and the opposition to it.

Peoples Dispatch:  What are anti-labor components of the new education policy of the SYRIZA government?

Chrisoula Lampoudi: Education in general has been deeply affected by the crisis. Education must answer to contemporary needs and potential. It must form people with a true knowledge of the laws of nature and society, and with the confidence and ability to take control of their lives. Today, we see that not even basic needs of schools are covered.

After more than 10 years without any permanent recruitments in the sector, the Greek government has announced that it will hire 15.000 school teachers in the next three years starting from 2019. This number is far behind the real requirements in the education sector. In these 10 years, more than 30.000 educators have worked as “replacement teachers”. We are talking about teachers who are being hired with an “expiry date” in the middle of the school year. They get fired every June. They are forced to move around the country, leaving their homes and families behind. Thousands of teachers have worked this way for years. The bill the government has brought to the parliament introduces a number of criteria that will end up in these teachers losing their jobs. Hence, we are in the midst of a struggle against these firings and are demanding the permanent hiring of at least 30.000 faculty who are already working as replacement teachers.

PD: What are the other policies of the government in the sector that you are opposing?

CL: The government’s policy is one of budget cuts. There is a shortage of teachers and entire schools have been shut down. In fact, many more would be closed were it not for the protests by students and teachers. Student care lags considerably too.

PD: What were the promises made by SYRIZA during the elections regarding education? What kind of steps has it taken after coming to power?

CL: Before the elections, SYRIZA told the Greek people that it would abolish the memorandum for the Greek economy that was signed by the previous governments. Instead, it has implemented it and in fact, extended it in all sectors, just like the earlier ruling parties. We are talking about the strategy of the European Union and the Organisation for Economic Cooperation and Development and the guidelines given in order to adjust education to the needs of big business groups. That is why funding for education continues to be low and there has been no permanent recruitment of teachers all these years. Student care is under-financed and school buildings are in a bad state in many parts of the country.

Meanwhile, the Greek parliament has passed a series of bills, merging universities, ensuring the state does not have to spend as much on education. At the same time, the government is giving away money to enterprises and spending millions on military expenses for NATO.

PD: What is the perspective of PAME and KKE with respect to education?

CL: Our proposal is based on the fact that today, humanity has made great strides in science and technology. All people could and should be able to attend modern, fully equipped schools that provide all the necessary facilities for a proper education. The education that people really need demands greater changes in society and the economy, in order to put people’s needs ahead of the profits of capitalists.