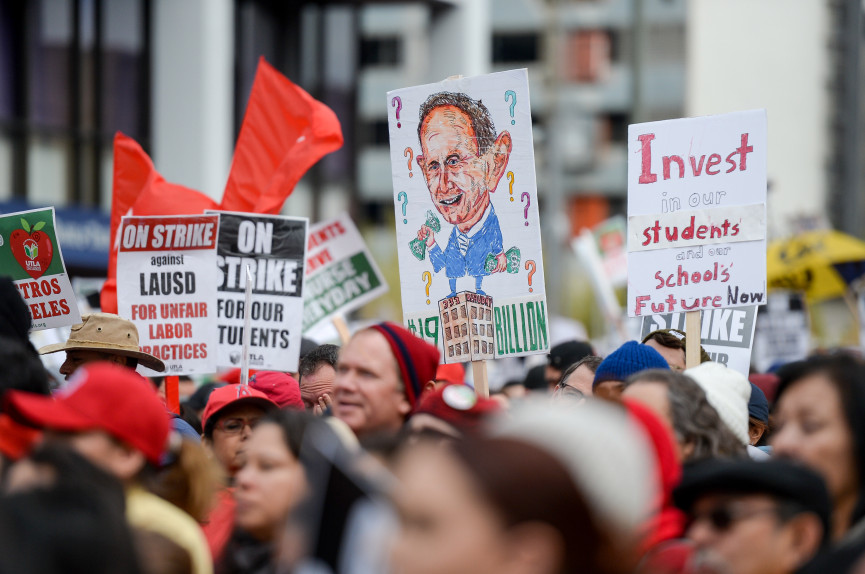 Thousands of Los Angeles teachers have been on strike since Monday.

On Thursday, the United Teachers of Los Angeles (UTLA) started negotiation with the Los Angeles Unified School District (LAUSD) authorities on behalf of the teachers who are on strike since Monday. The UTLA announced that discussions will continue on Friday. “No more details can be given since the parties have agreed to confidentiality,” they said.

The educators, under the banner of the UTLA, are demanding more investment to ensure smaller class sizes, more nurses, counselors and librarians, as well as more support for special education, early education, bilingual education and adult education.

On January 16, UTLA bargaining team chair Arlene Inouye announced, “The district has confirmed that it is ready to return to the bargaining table at City Hall on Thursday. We met with Mayor Eric Garcetti today and he has offered to mediate in an effort to help us work toward an agreement. State Superintendent Tony Thurmond has also been in touch with both parties and offered support in the process. We will be ready to bargain tomorrow and our team will work long and hard toward an agreement that benefits our students, members and communities.”

Meanwhile, it was also reported that the head of the union representing LAUSD principals has urged the LAUSD to close schools for the duration of the ongoing teachers’ strike.

The World Federation of Trade Unions (WFTU), representing 95 million workers in 130 countries, as well as the All Workers Militant Front (PAME) from Greece, expressed solidarity with the striking teachers of Los Angeles, California.

The strike affected the normal functioning of all the schools in the district. It has received immense solidarity from students, parents and other trade unions. On Wednesday, the fourth day of the strike, thousands of teachers had participated in numerous local action at various points in the city. The UTLA also gave a call for a rally at the central park, Los Angeles, on Friday.