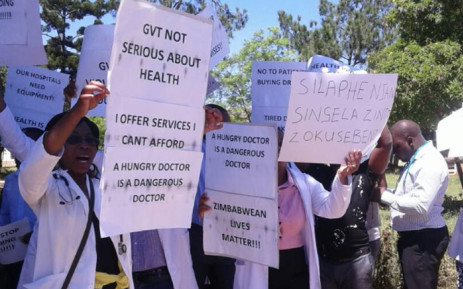 Doctors in Zimbabwe were on strike for nearly 40 days.

At least 300,000 civil servants are set to strike work in Zimbabwe in less than 10 days if the government fails to agree to their demands of a wage hike and payment in USD.

The demand for payment in USD has been voiced because the bond notes and electronic money with which they are paid, with the promise that each of its denomination is equal to the USD, have been losing their value sharply.

Zimbabwe is the grip of a severe crisis with many unions and sectors raising a similar demand. Both doctors and teachers went on strike in the country recently. Zimbabwe is also currently witnessing massive protests following the decision by the government to steeply hike fuel rates. The protests were violently attacked by the security forces, leading to at least three deaths and hundreds of injuries.

The crisis over the currency is feeding into these developments. Fearing a collapse of the quasi-currency, many pharmacies are refusing to sell their products unless paid in USD. Retailers are reportedly selling their goods at a price 4 times higher when paid in bond notes, which can then be exchanged for USD at the black market.

Another demand is the increase in salaries of the lowest-paid government employees to USD 1,733. Currently, they are paid USD 414 per month. The living wage, i.e., the wage required to afford basic food, housing and transport, was USD 305 a month for a single individual, and USD 575 a month for an entire family, last year.

The government held  negotiations with the Apex Council, an umbrella organization representing the unions of civil servants. In a bid to prevent the strike, the government offered a pay hike of 10% recently. This increase, by USD 41.4, still leaves their salaries well over USD 100 below a family’s living wage.

While the government has refused to pay this living wage, the prices of basic commodities and services have been soaring. The cost of tickets in commuter buses has trebled in the last two months alone, making the journey to work and back unaffordable for many.

Citing this “incapacitation” as the reason, the Apex Council rejected the government’s offer and served a notice on January 11, warning of a nation-wide strike if the government does not meet their demands in 14 days.

Only a day earlier, doctors ended their 40-day strike that was held to make similar demands and to protest against the chronic underfunding of healthcare which had made the system dysfunctional.

Doctors recount that they had to perform surgeries without gloves and masks due to shortage, which left them exposed to diseases that can be transmitted through body fluids and blood spillages. They also recount having to collect urine samples in regular plastic bags.

The doctors complained that, under these conditions, they are not really in a position to treat their patients in any meaningful way. However, with the patients being unable to receive what little poor treatment they got before, the doctors resumed  work. The Zimbabwe Hospital Doctors Association (ZHDA) announced on January 10 that the doctors have half-heartedly called off the strike.

While the government made unspecified promises, it made no offer of a salary hike. Warning about the uncertainty regarding resumption of work despite the strike being called off, the ZHDA said in a statement on January 10: “Sadly, with no salary review and frozen December salaries in this rough and ravaging economic environment, it remains a dilemma how our members will report to work daily. Indeed, poor remuneration and the current fuel shortage.. may spontaneously hinder our members from reporting to work daily and discharging quality health services to patients. That being said, our members have begrudgingly resumed work with effect from today, as dialogue continues.”

However, just as doctors called off the strike, the Zimbabwe Nurses’ Association (Zina) warned that its members employed at government hospitals may be unable to report to work due to “incapacitation”. Stressing that the nurses never considered striking work, the association rejected the 10% wage hike offered by the government, calling it a “mockery” of the service they provide.

“We urge the government to engage us and make a serious offer. Our members will soon be finding it difficult to continue subsidizing government by reporting for work using resources sourced from elsewhere,” Enock Dongo, the president of Zina, said.

At least USD 1.3 billion is needed for the basic functioning of Zimbabwe’s healthcare system. Restoring the quality and reach that it had when it was known to be one of the best in Africa will cost an estimated USD 8 billion, according to the health ministry’s estimate. The finance minister, Mthuli Ncube, has allocated USD 694 million for the health sector.

The plight of the country’s education system is no better. It is crippled with an acute shortage of teachers, and the employees in public schools are among the lowest paid in the world. Unable to afford even the costs of travel, the teachers are also set to strike work.

While the country’s public services are collapsing due to chronic underfunding, the Finance Minister, in an attempt to attract foreign investors at Belgium where he was touring at the time of the labour unrest, sought to reassure them that the state will not be violating the neoliberal prescription of austerity.

“This plan,” he said, “involves some painful measures to get our national budget under control. These measures will be felt by all of us, but are unavoidable if we want to get our economy back on track.”

“This plan”, sold across the world as a medication prescribed to get the “economy back on track”, appears to now have become a permanent feature of those developing countries which have swallowed the bitter pill for a better day.