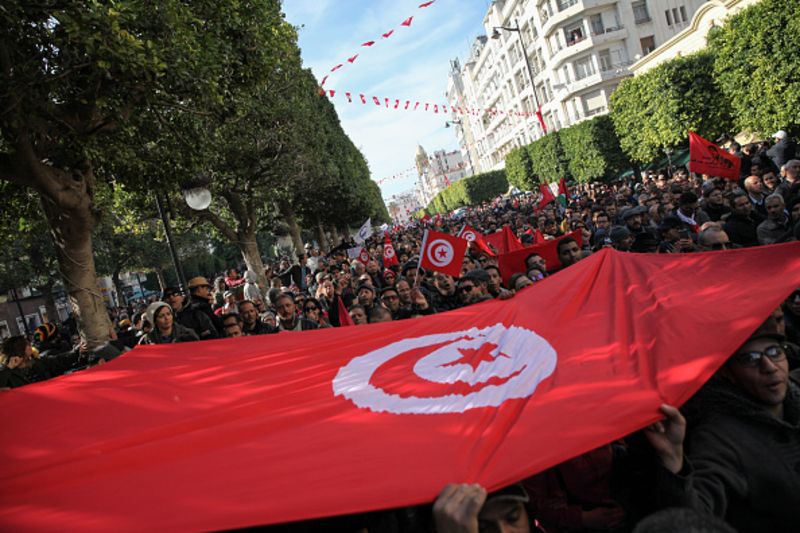 On February 6, teachers had staged a massive protest outside the prime minister's office. Photo: Chedly Ben Ibrahim/Nur via Getty Images

On February 7, the Tunisian General Labor Union (UGTT) and the government reached an agreement which will benefit 670,000 people directly employed by the state. As per the agreement, the increase in wages, in 2018-19, of these workers will nearly match that of those employed in public-private enterprises.

While the exact wage rate has not yet been officially announced, AFP reported that the agreement would facilitate a wage rise of USD 55. This would be a considerable increase to the current USD 250 – one of the lowest in the world – earned by state employees, and would help them cope with the 40% reduction in purchasing power which Tunisians have been subjected to since 2014.

“The deal is a victory for Tunisia, it will help create a good social climate,” head of the UGTT, Noureddine Taboubi, told the press after signing the deal.

One day before the signing of the deal, thousands of teachers rallied near the Prime Minister’s office and assembled on the Al Kasbah square, located opposite to the PMO, to protest wage stagnation. The teachers, who are among the affected state employees affiliated to the largest trade union, UGTT, have been boycotting exams for the last two months as part of the industrial action. Their slogans included “We want our rights” and “This is a pen revolution”.

In exchange for the loan of USD 2.8 billion, which Tunisia had borrowed from the IMF in 2016 amid the post-Arab spring political turmoil, the latter instructed the state to freeze the salaries of all its employees. By 2020, the Tunisian state has been tasked to reduce the portion of GDP it spends on paying salaries from the current 15.5% to 12.5%.

However, after consistent labor action over months, including rallies, protests and a one-day general strike last month which brought air transport, bus services and railways to a halt, the government finally caved in to the demands of its employees by agreeing to hike their salaries.

Had the government failed to do so, another general strike was on the way to paralyze the country on February 20 and 21.