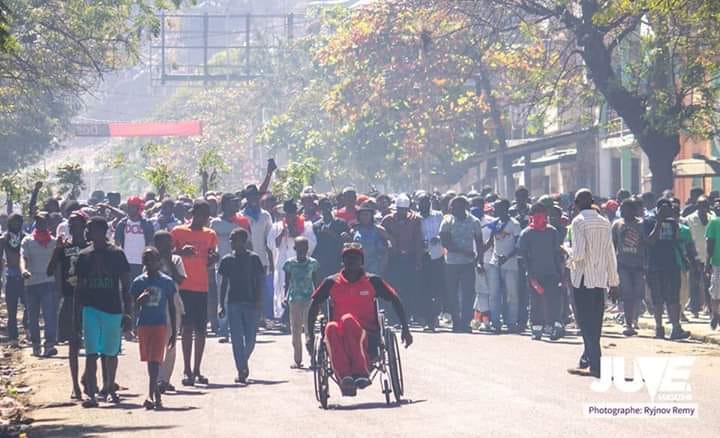 Due to IMF stipulations, Haitians, 60% of whom are below the poverty line, must pay high fuel premiums for the finance agency's loans.

Last year, in October, Haitians followed two Twitter hashtags that went viral—#PetrocaribeChallenge and #KotKobPetwoKaribea. If you are not Haitian and do not follow Haitian politics carefully, you can be forgiven for not noticing this development. The complaint on Twitter — and soon on the streets — was simple: what has happened to the billions of U.S. dollars that was in the Venezuelan-financed Petrocaribe program?

In 2005, when oil prices began to creep upwards and when the Bolivarian socialists led by Hugo Chávez were at their peak, 14 countries from the Caribbean met in Puerto La Cruz, Venezuela, to launch the Petrocaribe scheme. The idea was elegant. Venezuela, with one of the world’s largest oil reserves, would sell oil to the struggling Caribbean islands through a very lucrative deal. Part of the oil price was paid up front, and the rest was to be paid back over the years at a ridiculously low interest rate (1 percent).

Island nations of the Caribbean, who had struggled with debt and high import prices for energy, now found relief. Haiti and Nicaragua, which were not part of the 14 original members, joined Petrocaribe in 2007. “The Caribbean shouldn’t have problem this century and beyond,” said a buoyant Chávez.

Venezuela Had a Debt to Haiti

An economics of solidarity defined the Bolivarian socialist approach to the Caribbean. If the Caribbean countries thrived, then Venezuela would prosper in turn. The test of this generosity came in 2010, when Venezuela decided not only to write off Haiti’s debt after the earthquake but provided funds in addition for reconstruction. “It was not Haiti that had a debt with Venezuela,” Chávez said then, “but Venezuela had a debt to Haiti.” Since 2007, Venezuela had provided $4 billion in oil through Petrocaribe.

The debt that Venezuela had, in the long-term thinking of Chávez, was because of something that happened in 1815. The first president of the Republic of Haiti, Alexandre Pétion, gave Simón Bolivar sanctuary and armed him to return and liberate Gran Colombia (the vast northern lands of South America). Bolivar had promised Pétion that he would emancipate the enslaved Africans in Gran Colombia. This is what he did. Without Pétion’s demand and Bolivar’s victory, Chávez — whose ancestors had been enslaved — said on a visit to Haiti in 2007, “I would not be here.”

Haiti’s Debt to the West

No such generosity has come from the West. In fact, from the first fires of Haiti’s revolution, Western powers—from France to the United States—have attempted to destroy the Haitian republic. In 1804, France forced Haiti to agree to pay it $21 billion for the “theft” of enslaved Africans and others. It took Haiti till 1947 to pay off this odious, disgusting debt. France has never apologized for it. Nor has Citibank, which made billions off the payments. Neither France nor Citibank has considered replaying the inhumane plunder.

Venezuela’s generosity was not matched by any Western country or financial institution. Instead, the West piled on debt upon debt onto Haiti. Even the “assistance” given during the 2010 earthquake made Western companies money. “These guys are like vultures coming to grab the loot over this disaster,” said Haiti’s former minister of defense Patrick Elie. The amount of money stolen from the disaster relief and the increase to Haiti’s debt is as yet uncalculated. Millions of dollars were raised—such as by the American Red Cross—but very little of it was spent to lift up the burdens of the Haitian people.

Last February, the International Monetary Fund (IMF) said it would provide Haiti with $96 million in low-interest loans and grants. But it demanded that the Haitian government cut its crucial fuel subsidy. This subsidy has been a part of Petrocaribe’s program. Protests broke out across Haiti, which led to the resignation of Haiti’s prime minister Guy Lafontant in July (for an assessment of those protests, please read Dossier 8 from Tricontinental: Institute for Social Research).

The IMF demand for cuts in fuel subsidy came after revelations that Haiti’s elite had pilfered the funds from Petrocaribe. In 2017, Lafontant’s government released a 600-page Senate report on Petrocaribe’s previous decade. The investigation found that Haiti’s ruling class had stolen enormous amounts of these key funds. No one was called to account—not any of those who stole the money nor the banks that enabled them to do so. Noises about letting the Superior Court of Accounts and Administrative Litigation take hold of the report seemed to drift into nowhere.

In the midst of this scandal, the IMF policy directive was insincere. The IMF said that the Haitian poor, who had not stolen the money from Petrocaribe, should pay higher fuel prices to help set Haiti’s finances in order. No reparations from France or Citibank, no accountability for the theft of the Petrocaribe funds—none of that. Instead, Haitians—almost 60 percent of whom live below the poverty line—must pay high fuel premiums for the IMF’s paltry loans.

Protests broke out a week ago across Haiti. What motivated the streets to be on fire this time was the rise in prices of fuel and the position taken by Haiti against the government of president Nicolás Maduro of Venezuela.

In the midst of the economic war against it, Venezuela has not been able to provide Haiti with subsidized fuel. Haiti’s people had to now go to the U.S. oil companies and pay U.S. prices for fuel. This has created bottlenecks in the supply of fuel and frustration at the rising prices. Novum Energy—of the United States—kept ships sitting in Port-au-Prince harbor, waiting for the cash-strapped Haitian government to pay up before unloading 164,000 barrels of petrol and 205,000 barrels of kerosene. There is no solidarity pricing here (in fact, Haiti has to pay $20,000 per day to each ship that is sitting in the harbor as a penalty). These firms want cash, and they want full price.

To add insult to injury, Haiti’s government decided to join with the United States in the vote at the Organization of American States (OAS) against Venezuela. As recently as 2017, Haiti’s representative to the OAS — Harvel Jean-Baptiste — had voted against a similar anti-Maduro resolution. But this time, Haiti’s Léon Charles voted with the United States. It was a vote that provoked anger in the streets of Haiti. The one country—Venezuela—that had come to Haiti’s aid was here being betrayed. That is the mood.

Meanwhile, other Caribbean countries stood firm. The Caricom (Caribbean Community) group of 15 states from Antigua and Barbuda to Trinidad and Tobago drafted a strong statement to defend the sovereignty of Venezuela. They have worked to create the atmosphere for dialogue, which resulted in the joint Uruguay and Mexico sponsored meeting in Montevideo, Uruguay, on February 7.

These small island states know the great peril of allowing the anachronistic Monroe Doctrine (1823) to be fully revived. The idea that the American hemisphere is the “backyard” of the United States is not only humiliating, but it is also against the spirit and letter of the UN Charter.

It is this humiliation that motivates the people of Haiti to take to the streets. Their message is simple: if you won’t let us breathe, we won’t let you breathe, and if you suffocate Venezuela, you suffocate us.

Credit Line: This article was produced by Globetrotter, a project of the Independent Media Institute.