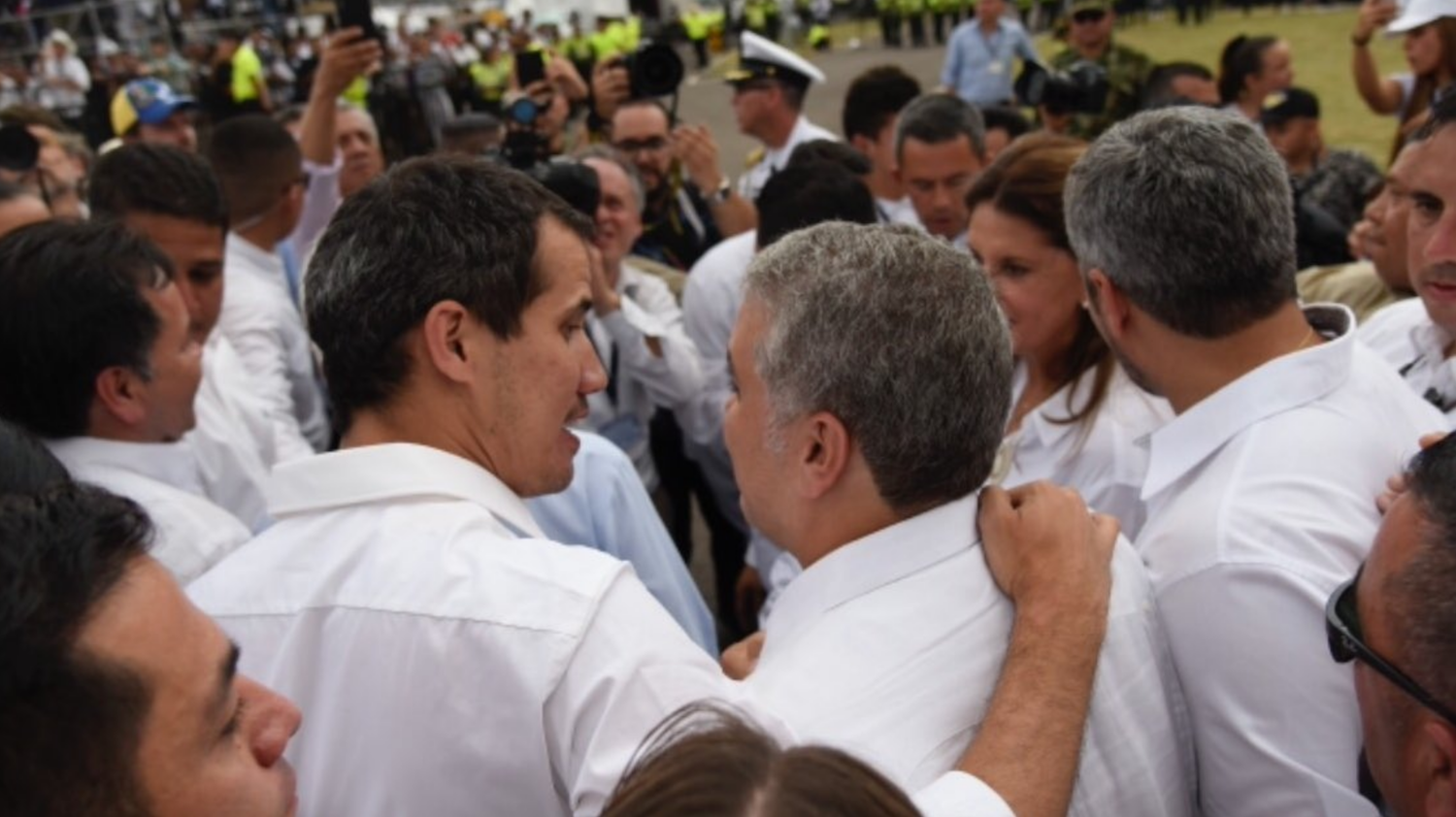 February 23, the day of the deadline given by self-proclaimed president Juan Guaido for the Venezuelan government to let in ‘aid’ from Colombia, was marked by provocations by the opposition on the border of the two countries. Sporadic clashes occurred at the border. A truck carrying aid was set on fire at Urena on the Colombian side, although media attempted to blame Venezuelan forces for the incident. Reports also emerged of opposition activists wearing Red Cross uniforms in their attempt to deliver the ‘aid.’ The act was condemned by the Red Cross.

Later in the day, at a press meet on the border, Guaido, who was accompanied by Colombian president Ivan Duque and Organisation of American States secretary general Luis Almagro, Guaido continued to call for foreign intervention. .

Venezuela also officially cut diplomatic ties with Colombia. Speaking at a massive rally in Caracas attended by tens of thousands of people, president Nicolas Maduro denounced attempts by the US and Colombia to intervene in the affairs of Venezuela, terming Duque the “devil.” `

Throughout the day, protesters from the opposition engaged in stone throwing at the Venezuela-Colombia border. Some of them threw Molotov cocktails and were met with tear gas by Venezuelan security forces. Videos indicate that the aid truck was set on fire some distance from Venezuelan security forces. Yet, media outlets and a number of international figures, including US secretary of state Mike Pompeo, claimed that the truck was burnt by security forces. Guaido himself left to Colombia early on Saturday, defying a court-imposed ban on travelling outside the country, Venezuela Analysis reported. They day before, a concert, Venezuela Aid Live, was also held in Cúcuta, Colombia with the participation of several pro-right-wing Venezuelan and Colombian artists and social media “influencers”. Many saw the concert as a media show to increase border tensions.

Reports say that four people died on the border with Brazil although they are yet to be confirmed. A handful of soldiers are reported to have defected to Colombia but the military remained firmly on the side of the legitimate government of the country on a day Guaido had called on them to rebel.

Pro and anti-government rallies were held near the border although reports indicate the former were considerably larger. At the rally in Caracas, Nicolas Maduro said that the Venezuelans at the rally and similar mobilizations across the country were on the right side of history. He vowed to take action against those who had organized the violence while noting that the struggle for peace would have to continue. He mocked US president Donald Trump’s effort at providing ‘humanitarian aid’, asking when Trump had ever helped anyone.

The Lima Group of countries, which has been in the forefront of the coup attempt against Maduro, will meet on Monday. Guaido and US vice-president Mike Pence will both attend the meeting. The day also saw various sections of the US political establishment side with Guaido. Hillary Clinton, Bill Clinton and Bernie Sanders were among the prominent Democratic leaders who expressed support for Guaido. At the same time, in cities across the world, including in the US, people’s movements mobilized in support of Nicolas Maduro and the Bolivarian Revolution.