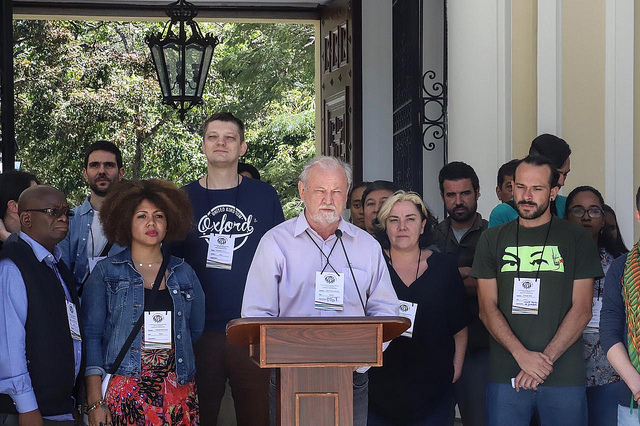 Delegations from 85 countries will be in Venezuela for the International Peoples' Assembly. Photo: José Eduardo Bernardes / Brasil de Fato

On February 23, delegations from 85 countries began to arrive in Caracas to participate in a meeting in solidarity with Venezuela as part of International Peoples’ Assembly (IPA). The meeting will take place from February 24 to 27. At a press conference on Saturday, the members of the coordinating committee of the Assembly discussed the details of the meeting and its organization.

João Pedro Stedile, member of the National Board of the Landless Rural Workers’ Movement (MST), and coordinator of the Vía Campesina International, said that the date chosen for the event symbolizes solidarity with Venezuela, which is a target of attacks from neighboring governments and the United States.

“We are here, the coordinating commission of the International Peoples’ Assembly. For the last two years we have been preparing for the Assembly and we decided that it be held here in Caracas, on this date, as a form of solidarity from all of the organizations in the world with the government of Nicolás Maduro and with the Venezuelan people,” noted Stedile.

Struggle in defense of life

The representative of Spain, Marga Ferré, affirmed that although European governments have openly defended an intervention in Venezuela, this is not the position of the majority of the citizens of these countries, who reject violence as a form of solution to conflicts.

“The people of Europe do not want a military intervention, and part of what we will debate in the following days is how to build an agenda of solidarity with Venezuela and work on this in Europe. Something we believe in strongly is that every people has the right to be governed how they want,” she highlighted.

Representing the United States, Claudia de la Cruz, member of the Popular Education Project, termed the position of the government of Donald Trump as “immoral” and highlighted the contradictions in the discourse about the “humanitarian crisis” in the Latin American country.

“It is embarrassing, it is criminal and immoral that the United States – a country where 140 million poor people live, where 6 million live with hunger daily – comes and tells Venezuela that there is a humanitarian crisis. Venezuela has the resistance and the defense of the revolution that permits the redistribution of riches to the most poor, the most dispossessed. Venezuela does not have a humanitarian crisis. In Venezuela, there is a struggle in defense of life. The United States cannot say this. Venezuela is an example of the struggle for dignity of all of the peoples of the world and that is why we are here,” she said.

The International Peoples’ Assembly is taking place at a moment when the government of Venezuela is being pressured by other governments of the region, above all Colombia, Peru and Brazil, in addition to the administration of Donald Trump. Dozens of heads of state have recognized the self-proclaimed interim president of Venezuela, Juan Guaidó, who made a failed bid to bring ‘aid to Venezuela on Saturday. Saturday also saw attempts by opposition activists to create tension in the border region under the pretext of delivering this ‘aid’. The government of Nicolás Maduro, reelected in May 2018 for a new term of six years, has rejected the entrance of the shipments, and has termed it a Trojan horse that will open the road for foreign military intervention.

On February 24, as part of the opening of the Assembly, a “Concert for Peace” will be held in Caracas.