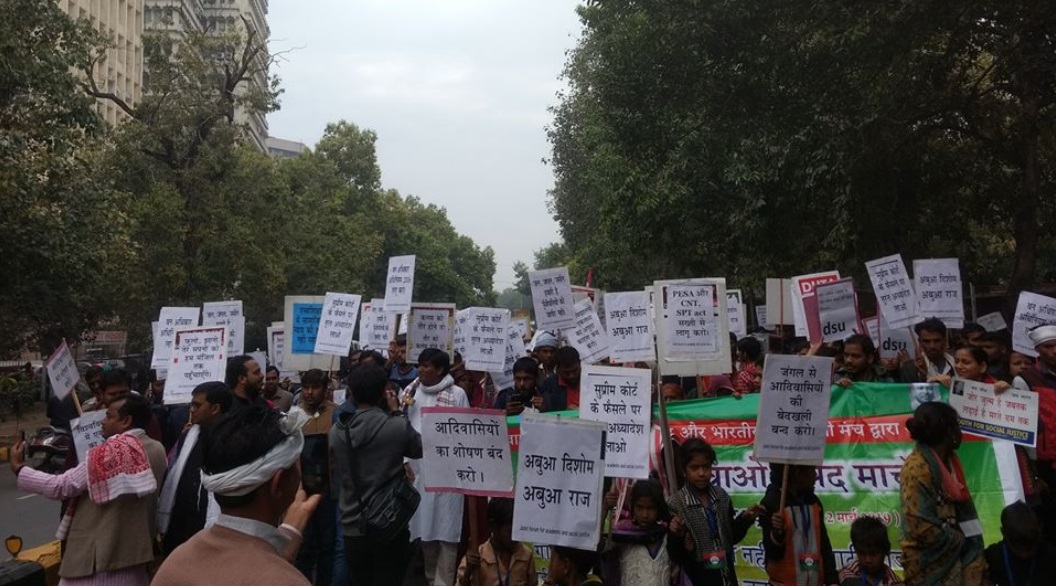 In India, on March 2, thousands of forest-dwelling adivasis, indigenous tribes, marched in the capital city of New Delhi to Parliament Street against the Supreme Court orders to evict them. The protests come in response to a by the nation’s highest court, on February 13, over a petition by conservation groups, ordering the eviction of close to 2 million adivasis from protected forest lands. Demanding their rights as forest-dwellers be safeguarded the protesters demonstrated the eviction order be withdrawn.

After the Supreme Court of India ordered against tribal rights, the union government filed a plea before the apex court to modify its February 13 order, permitting states to temporarily withhold eviction of around 1.89 million adivasis and other forest-dwelling families. The Centre has previously pleaded that the three-judge bench give all states a chance to file detailed affidavits on the implementation of the, Scheduled Tribes and Other Traditional Forest Dwellers (Recognition of Forest Rights) Act of 2006, more commonly known as the Forest Rights Act.

“If the BJP government is concerned about the tribals, the need of the hour is to bring in an ordinance or to file a review petition in the decision. The government is determined not just to benefit the corporates, but also the tourism industry,” said Archana Prasad who teaches at the Centre for Informal Sector and Labour Studies in Jawaharlal Nehru University, noted.

The claims of nearly 226,000 adivasi and other forest-dwelling households have been rejected on various grounds, including absence of proof that the land was in their possession for at least three generations. But the fact remains that for several these families, documentations to their legitimate claims to the lands that they have inhabited for generations have been denied to them because of bureaucratic inefficiencies and the lethargy of successive governments.

The Ministry of Tribal Affairs and the Ministry of Environment, Forest and Climate Change – which are respondents in the case – have kept silent in the last four hearings of the court. The right-wing BJP-led national government’s failure to defend the rights of forest dwellers has led to the order that can uproot hundreds of thousands of families from their traditional lands.

Activists on the ground have been asserted that the governments, both central and state, are doing their best to not recognize the Forest Rights Act, and manipulate the tribal records to make the process of their eviction much easier.

According to one of the participants of the protest, Barkha Lakra, “there is no question of fearing action now. For us tribals, this fight is now a do or die situation. It was the duty of the government to safeguard our rights and defend the Constitution, but it has failed us miserably. People on the ground are extremely furious with the verdict from the Supreme Court, an agency which should have ruled in our favor.”

Similarly, another activist associated with Adivasi Adhikar Rashtriya Manch, Jitendra Choudhary said: “Forest dwellers, more particularly adivasis, are at the receiving end of this embargo which has been put on the lives of the tribals. The risk in which their lives and livelihood is being put at today can be primarily attributed to the Modi government’s apathy towards the tribals. Had the government represented the tribals with sincerity, the verdict of the court may have been different. The appearance of the Tribal Affairs ministry was primarily for a namesake, and not to yield any substantial benefit to the case of the Adivasis.”

“This is just the beginning of the process of trampling the tribal rights. The verdict is likely to have far bigger implications for the rest of the nation,” he noted.

Left parties including Communist Party of India and the Communist Party of India (Marxist), along with All India Forum of Forest Movements and Campaign for Survival and Dignity, sent a letter to the Ministry of Tribal Affairs about its failure to defend the historic and landmark Forest Rights Act, in the Supreme Court. Several commentators have also pointed out that the justifications used for the eviction order, by the apex court, itself comes from the debunked myths of forests as completely separate from human ecosystems. It was also noted that even the legal precedence, that the petitioners argued for, was based on colonial conservation laws that never considered the rights of the indigenous inhabitants, and were themselves radically reformed and undermined by the Forest Rights Act.