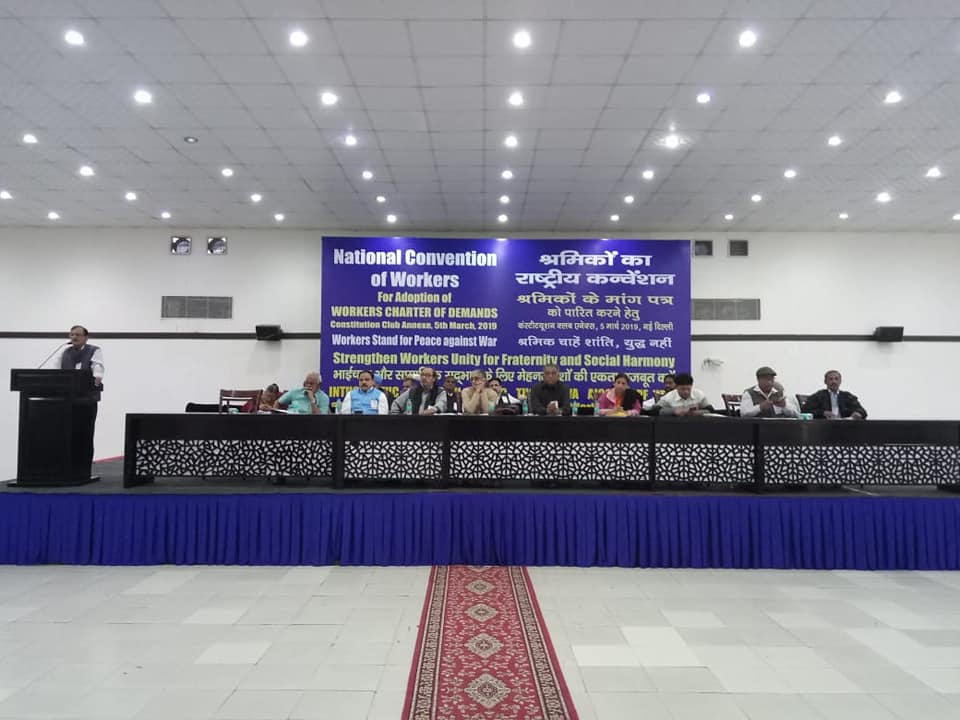 On March 5, members of ten central trade unions in India congregated for a National Workers’ Convention in New Delhi to pass a charter of demands ahead of the national elections this year. Condemning the anti-worker policies of the far right-wing government, headed by prime minister Narendra Modi, the unions gave a clarion call for the working class of the country to unite. Since the government came to power in 2014, it has accelerated neoliberal economic model and eroded the rights of the working class.

“Our convention comes at a key time. We have to take these demands to the common people of the country who have suffered the most at the hands of the BJP government,” said Tapan Sen, general secretary of the Centre of Indian Trade Unions (CITU).

Rajiv Dhimri of the All India Central Council of Trade Unions (AICCTU) spoke about the grave threat of fascism engulfing the entire country and the big, united fight needed to stop the menace.

The working class population was forced to embark on more than 18 country-wide general and sectoral strikes since the Hindu conservative Bharatiya Janata Party (BJP) won the 2014 general elections. Addressing the workers, who had travelled from across the country to attend the convention, Amarjeet Kaur of the All India Trade Union Congress (AITUC) said, “The draft that we have released today is guiding our campaign. The BJP has been the most blatant in its attack on the workers. Even though the Parliament is no longer in session, it is still using backdoor methods to continue with the policy of privatization. For example, the privatization of oil companies, airport bids and the privatization of steel companies has been done by the government without being in session.”

Referring to the nationwide general strikes of workers in November 2018, on January 8-9, 2019, and more recently, the strikes of transport workers and those in the defence sector, Kaur added, “The workers have continuously answered back to the government, showing them the strength in resistance.”

The leaders asserted that every sector of the working class has suffered enormously under the Modi government, with the workers now struggling for their identity and livelihood, and the prices of all essential commodities, including housing, transport, electricity, education and health, increasing. The wages have been stagnant in many sectors, for most of the contract, casual and daily wage workers, as well as workers in the unorganized sector. The government is stubbornly refusing to implement the consensus recommendation of the Indian Labor Conference (ILC) to notify minimum wages as per the 15th ILC formula, along with the Supreme Court judgment in the Raptakos & Brett case.

The issues of failed promises of the Modi government over creation of employment, the lack of commitment to health services as well as its apathy and support to the brazen corporate loot were also extensively discussed.

The draft called for a comprehensive legislation, covering social security and working conditions for all workers, including agricultural workers. It also demanded the government to urgently check unemployment and assure a minimum pension of Rs 6,000 (USD 85.37) per month as well as indexed pension to all. They also demanded recognition of workers employed in different government schemes and immediate revocation of ‘fixed term employment’.

The unions asked for ending the disinvestment/ strategic sale of public sector undertakings (PSUs) and giving revival package to the important PSUs in public interest. Their 15-point charter expects the government to scrap NPS (national pension scheme) and restore the old pension scheme (which was dearness relief linked for government employees). It also demands an end to anti-worker and pro-employer amendments to the labor laws and codifications, and stricter implementation of the existing labor laws.

The article first appeared in Newsclick and has been slight edited for style and content.