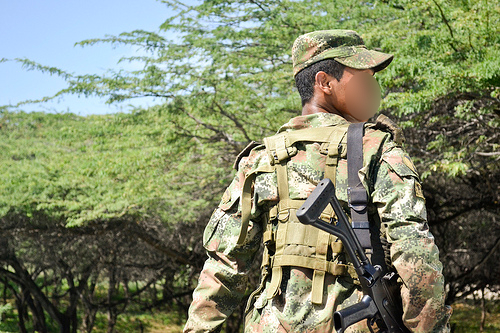 On March 7, in the small town of Micoahumado, in the Morales municipality of Bolivar department, Colombia, one civilian was killed and another was severely injured when the Colombian National Army launched attacks on alleged ELN members.

“A group of young boys were organizing a football game when the Army shot a series of rounds in the field, arguing that there was a presence of ELN guerrilla fighters. In this attack, a young man of 18 years died and another was injured,” Nelson Orrego, member of the Federación Agrominera del Sur de Bolívar, told El Tiempo newspaper.

The inhabitants of the town condemned the incident and asked the army for an explanation for the death of the young boy.

Through a joint communiqué, the inhabitants and social and peasant organizations of Micoahumado, such as Proceso Ciudadano Comunitario por la Vida, la Justicia y la Paz de Micoahumado, Federación Agrominera del Sur de Bolívar, Corporación Sembrar, Capítulo de Víctimas de Crímenes de Estado del Sur del Cesar, Sur de Bolívar y Catatumbo, Corporación Programa de Desarrollo y Paz del Magdalena Medio, denounced that the confrontations between the ELN and the army had been constant since March 2 and that they are terrified. On March 4, around 10:00 pm, the ELN members attacked the soldiers stationed at the Torre de Telecom with grenades and gun fires. The army also, in return, fired several shots. Earlier, in a confrontation on March 2 that began at 3:00 am and lasted an hour, the sports center of the town was damaged by gun shots.

The clashes between the guerilla and the army have become a major cause of concern for the residents, especially with regard to children. “Soldiers are approaching young people by trying to convince them to cooperate, to support them in things that they do not specify. This is a clear attempt to link young people to networks of informants and thus to involve them in armed conflict” stated the communiqué. It also emphasized that “the military approach children, give them candy and take advantage to ask for information on the guerrilla fighters.”

The residents are also concerned about the invasion of civilian properties by the soldiers of Fuerza de Tarea Conjunta Marte, stationed in the region, who use these spaces to meet their water and sanitary needs, as puts the population in the midst of hostilities.

The residents want both the armed forces to leave the vicinity and argue that “they are infringing the principles of international humanitarian law that requires armed actors not to involve in any way the civil population in armed hostilities.”

Across Colombian territory, attacks on the ELN by the Colombian State have increased since the Government suspended the Peace Talks in January and the civilian population across the board are the principle affected by the intensification of the war in the territories.