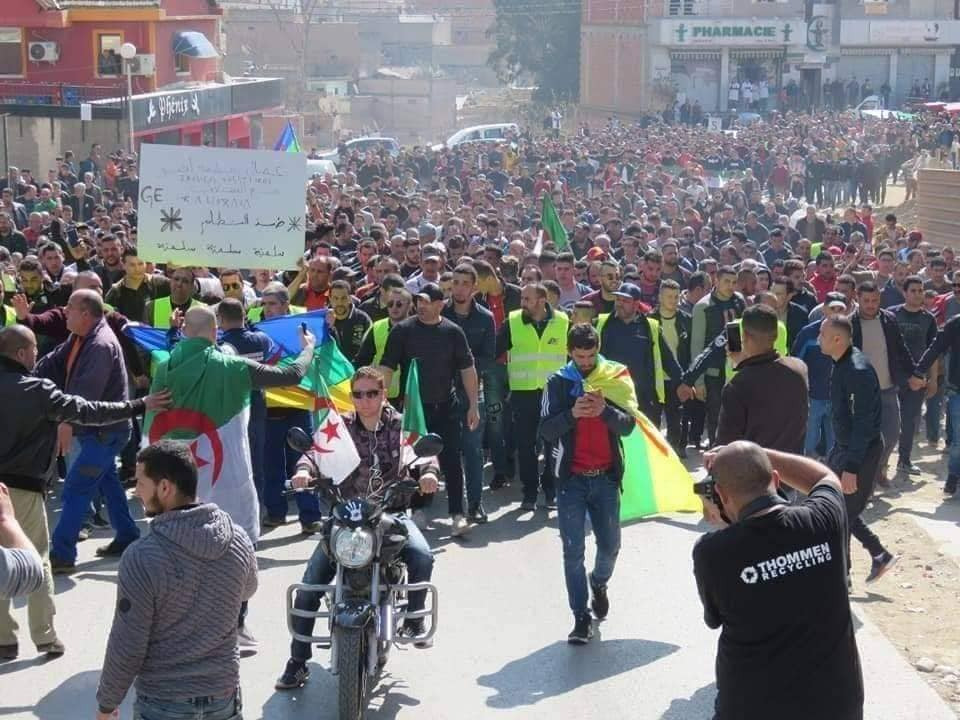 Protests in Algeria against a fifth term for Abdelaziz Bouteflika

Today, the president of Algeria Abdelaziz Bouteflika renounced his plans to stand for the upcoming presidential elections. He also issued a statement postponing the elections which were planned for April 18, 2019.

This announcement marks a historical triumph of the Algerian people’s struggles. The current president was forced to step back from running for a 5th term.

The crowds shouting “No to a fifth round” reflect a popular discontent with the current political, economic and social situation. Their slogans though, go beyond the presidential elections and make social and economic demands related mainly with putting an end to the increasing unemployment, precarious work conditions, and inequality. The demonstrators have expressed a broad dissatisfaction with the results of 20 years of Bouteflika rule.

In 1999, Bouteflika presented himself as a saviour from the economic and political crisis of the 90s. However, throughout his time in office he has represented the interests of a military oligarchy which controls oil and power resources, a bureaucratic class which took advantage of state power to accumulate wealth, and the multinational companies, which are mainly French oil and gas companies.

Therefore, economic and social conditions continued to deteriorate as Bouteflika followed the same neoliberal policies which had been implemented by his predecessors.

The current protests reflect the strong power of the Algerian people who achieved independence from France in 1954 after a heroic war of independence called “the Algerian Revolution”. This revolution of decolonization was led by the National Liberation Front (FLN) and led to the withdrawal of French occupation. However, many veterans consider that the independence agreement guaranteed the interests of French imperialism, and called for the shift from the national revolution to the socialist revolution. With the arrival of Houari Boumédiène to power, the state policies swayed towards privatization and liberal economy which guaranteed the interests of international capital and allowed a small part of the bourgeoisie to accumulate capital and enriched itself by taking advantage of the state structure. For the majority of Algerians, this led to severe economic and social problems.

In 2018, oil exports constituted 95% of Algeria‘s foreign earnings. On the other hand, social inequalities increased significantly, precarity became the dominant while unemployment rates rose to 12.3% and more than 1 in 4 of the Algerians under the age of 30 are unemployed.

Today, the youth constitute the driving force of the protests. Since the eruption of demonstrations, the Algerian student movement has been actively engaged in the protests, with thousands of students participating in the mass mobilizations. As a result, the High Education Ministry issued a ruling ordering an early start of spring holidays. However, the students defied this decision and continued their mobilization from universities and campuses.

The leadership of the central Algerian trade union UGT supported Bouteflika’s candidacy which led to strong rejection from their bases. Many local sections rejected this alignment of their leadership and made statements denouncing the shameful position of their leaders. Recently, a huge part of the working class joined the protests where they put yellow jackets and made their voices heard in a scenario which is similar to the Yellow Vests protests in France.

The trade unions of teachers and educational workers called for a teachers strike on 26 and 27 February. One week later, a general strike shut down the transportation system, schools and commercial facilities.

Algeria has not seen this kind of protest in the last three decades. However, there have been many popular protests which reflected a growing social struggle. There were massive protests against finance law in 2017, a big strike of workers against pension reform and also huge demonstrations in 2011 demanding an increase in the minimum wage.

Today, the people of Algeria made a great achievement. Besides, the voices of the youths, women and men of all ages express a flagrant reality: the 82 years old Bouteflika does not only represent a failure of the ruling class to find their “constitutional representative” but also the failure of the whole liberal regime to meet the demands of Algerian People and the need to bring a human alternative.

Many consider this move as an attempt by the Algerian regime to reduce the growing tensions and popular anger which was triggered by Bouteflika’s former decision to run in office for the 5th term.

Still, Boutflika will go. The Algerian people said the words, history obeys their will. Now, it’s time intensify and unify the struggles. until the people guarantees its emancipation and the achievement of the unaccomplished tasks of the Algerian Revolution: An Algeria of freedom, justice and equality.