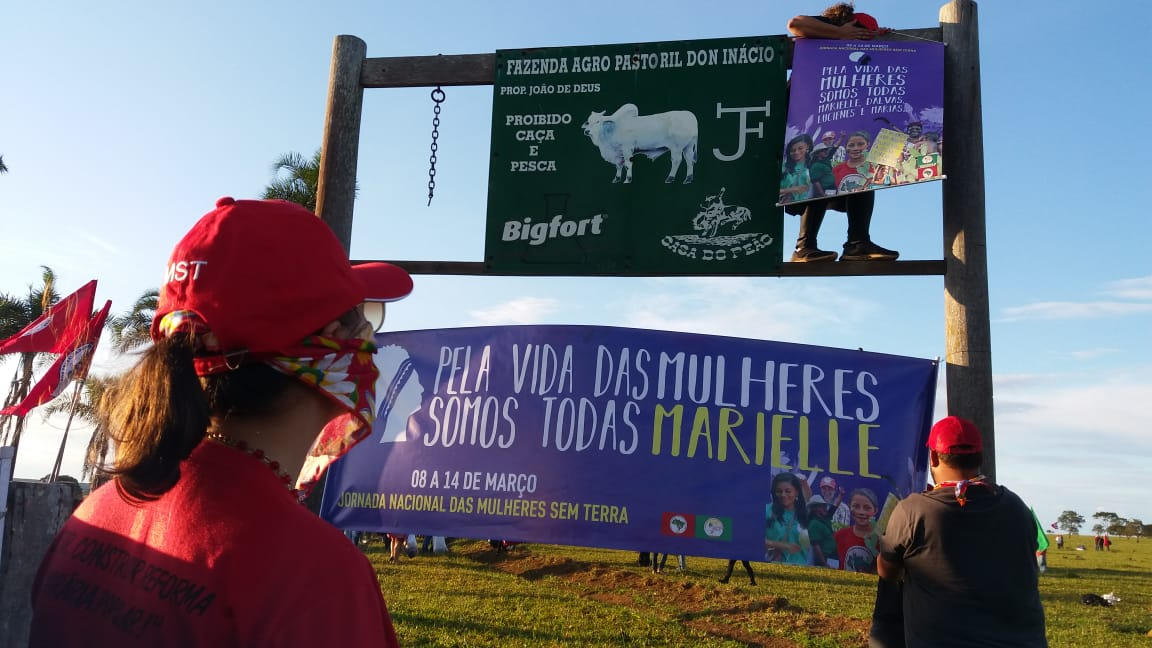 On Wednesday, March 13, over 800 landless women occupied one of the farms of João Teixeira Farias, known as ‘João de Deus’ who became famous in Brazil and across the world in the 1970s for his services as a so-called medium and “psychic surgeon”. His farm “Dom Inácio”, which is the subject of legal proceedings, is located in Anápolis in the rural region of the Brazilian state of Goiás. The land occupation was carried out as part of the national days of struggle of the Landless Women.

In December 2018, Teixeira was publicly accused of sexual abuse and violence and since then, more than 500 women have come forward to the police and the Public Prosecutors Office of Goiás to report abuse by him. Most of these incidents took place at his “treatment facility”, Casa Dom Inacio de Loyola, in Abadiânia-Goiás. It was later found that since 1980, a number of complaints had been filed against him. One of the first reports of such an incident was by his own daughter, Dalva Teixeira, 45 years, who declared in a video that she had suffered sexual abuse at the hands of her father between the ages of 9 and 14.

In addition to his flagrant sexual abuses, Teixeira is also known for accumulating unproductive land and terrain in the State of Goiás. According to research by the newspaper Folha de S. Paolo, he has 27 properties registered under the name “João Healer”, 23 of which are in the urban area totaling 19,725 square meters, 4 in the rural area totaling 703 hectares, which add up to 985 football fields.

In a statement about the land occupation, the women of the Landless Rural Workers’ Movement (MST) and the People’s Peasant Movement (MCP) stated, “Today, the landless women occupy the Agro-pastoral farm Dom Inácio, which is fruit of abuse, rape and violence. We fight #ForAllofUs in a Brazil that is the country with the fifth highest number of violent deaths of women according to UN data”.

After the public accusations in December of last year, Teixeira was put in preventative detention on charges of rape, rape of vulnerable persons and sexual violation through fraud, coercion and corruption of witness. Yesterday, Tuesday March 12, the Criminal Justice Court of Goiás accepted a habeas corpus for him and his son Sandro Teixeira, though João will remain in prison as he has other charges against him.

The women occupying his lands also pointed out that almost a year after the assassination of Rio de Janeiro councilwoman Marielle Franco, the people who ordered and planned this deed still walked free.

They stated, “Our commitment is to continue as part of the permanent struggle in the current moment we live in. Against the perverse formula of appropriation and concentration of wealth in the hands of a few and the increase in misery and inequality. Against the current government that takes away the rights of women, that oppresses us, violates us and kills us.

Against machismo and the patriarchy. Against everything that silences us, humiliates us, and kills us, we continue for all of us.

For the life of women, we are all Marielle.”

Video from the Women’s occupation of João Teixteira Farias’ farm.