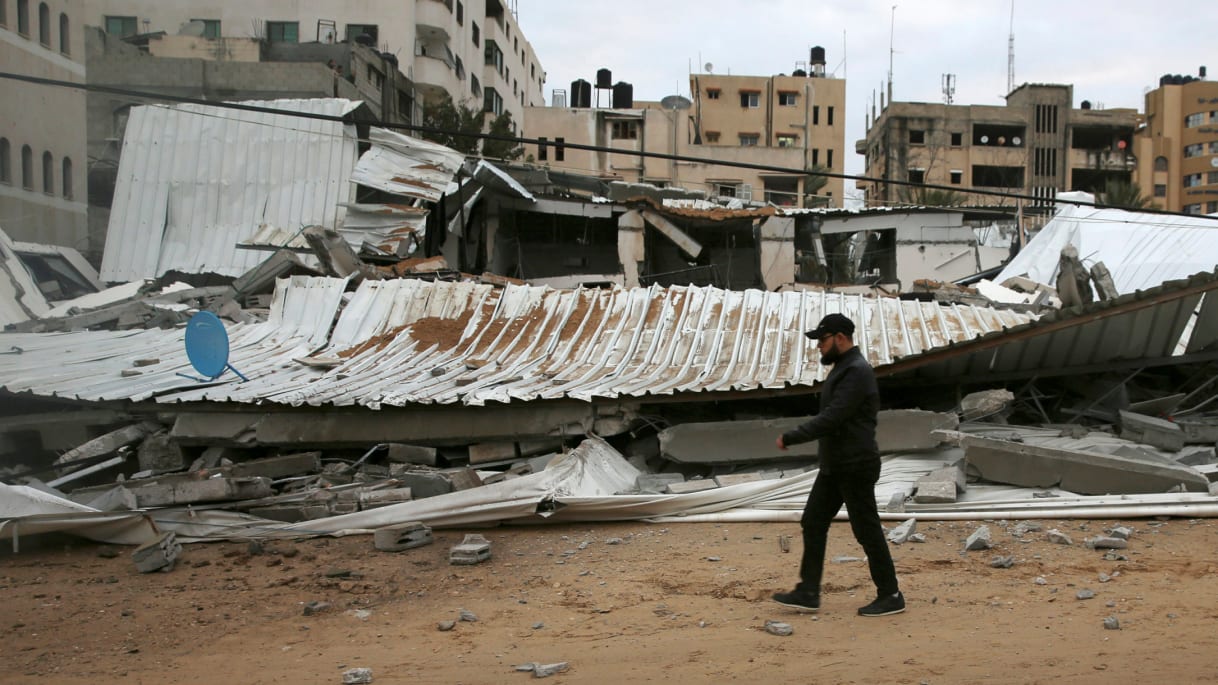 A Palestinian looks at the debris as a result of Israeli airstrikes. Photo: Haaretz

Israel, on Friday, conducted airstrikes on 100 different sites in Gaza in what it claimed was a response to the firing of two long-range rockets into Tel Aviv. The Israeli airstrikes led to four people, including a couple, suffering injuries, according to Gaza’s health ministry. Powerful explosions rocked Gaza, sending tremors across buildings. Palestinians reported intense and incessant bombardment, with many posting photos on their social media capturing the explosions from the airstrikes. No casualties or damage to property was reported as a result of the attacks on Tel Aviv.

The Israeli army, in its statement, held Hamas responsible, saying “All events transpiring in the Gaza Strip and emanating from it.” However, later in the day, Israeli officials told the Times of Israel that the rockets directed at Tel Aviv were probably fired by mistake during maintenance work. Hamas denied any responsibility, as did Islamic Jihad. Following the Israeli airstrikes, more rockets were fired towards Israel in response. The Israeli military said in a statement, saying that its Iron Dome missile defence system intercepted five of the six missiles that were fired from Gaza.

The rocket attacks on Tel Aviv took place at a time when Hamas officials were meeting a delegation of Egyptian security officials to discuss extending a ceasefire. Nonetheless, sections of the Israeli right wing were quick to ramp up warmongering. Naftali Bennett, the extremist, hardline, Israeli education minister, called for an “”uncompromising pursuit and systematic neutralisation of Hamas’ leaders.” He called for a plan to defeat Hamas, adding, It’s time to act unilaterally and demilitarize Hamas in order to defend Israeli citizens,”. Israel’s ex-army chief, Benny Gantz, who is leading the Blue and White party, also clamored for war.

Meanwhile, the organizing body of the Great March of Return weekly marches and protests decided to cancel this Friday’s protests on the Gaza-Israel border. In a statement, the body said, “In keeping with the public interest, the commission has decided to exceptionally postpone its activities scheduled for this day.” The statement went on to say that the protests will resume in the coming weeks, especially in preparation of the upcoming one year anniversary of the protests on March 30. Over 250 Palestinians have been killed by Israeli gunfire since March 2018, with the majority of them being shot during the weekly Great March of Return border protests.

In Israel, the right-wing aggressiveness comes ahead of Israel’s parliamentary elections on April 9. Netanyahu and the Likud party are facing a challenge from the Blue and White party. Netanyahu has been indicted for corruption and is hoping for a victory to shore up his credibility.