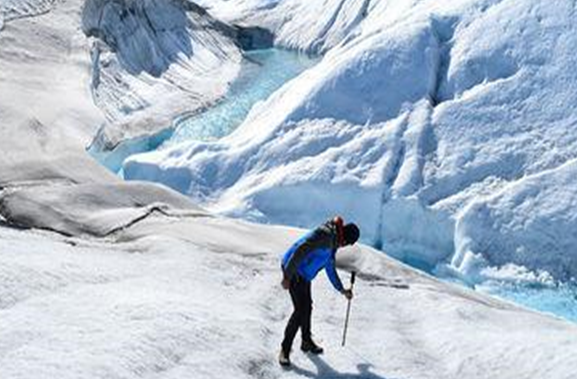 Rains in the Greenland are enhancing the cascade of arctic ice sheet melt and sea level rise. With more frequent rain, ice melting has become more fervent, making the future more dangerous. What is even more disturbing is the fact that raindrops, even in dead winter, are pockmarking large areas of the ice, which would only expand as the climate warms—says a new study published in The Cryosphere.

With global warming, each year, Greenland’s 1.7 million square kilometer ice sheet excises 270 billion tons of ice that goes into the oceans and seas. Between 1992 and 2011, the global sea level has been raised roughly by 7.5 millimeters by the lost ice of Greenland. Roughly half of the ice that was lost in the period occurred at the ice sheet’s edge and in the form of icebergs cleaving from the glaciers. But the trend has changed now and recent satellite pictures reveal that almost 70% of the contribution made by Greenland to sea level rise has come from melted water, and not ice.

Meltwater that comes from surface melting dominated Greenland’s ice lost in 2011, doubling Greenland’s contribution to sea level rise. Global warming has accelerated this process and over the last 30 years, the average air temperature of the ice sheet has gone up by as much as 1.8 degree Celsius in summer and up to 3 degree Celsius in winter.

Surface melting or premelting is the phenomenon where a quasi-liquid film occurs over the ice even when it lies below the melting temperature. Surface melting has become a major cause of Greenland’s mass loss.

To have an account of the causes of acceleration of this process, climate scientists used more than 30 years of satellite data to decipher ‘melt events’ where the amount of liquid over the ice has suddenly increased. Liquid water’s unique property of absorbing and emitting microwave radiation from the sun has made it possible for the satellite to capture the date of these melt events. Water can emit microwave radiation 100 times more than the snow can, allowing even slightest increases to be captured by the satellites.

Combining satellite data with the local weather readings, scientists identified that 313 melt events were caused by rain during the period 1979 to 2012. The study published in The Cryosphere says that, over the study period, the melt due to rains doubled during summer and tripled during winter.

Marilena Oltmann, the lead author of the study from the GEOMAR Helmholtz Centre for Ocean Research, Germany, said in Science Magazine, “The weather patterns sending this moisture to Greenland are not new, but because the background temperature is higher, more of this moisture is falling as rain rather than snow.”

“The impacts of this rain on the ice sheet extend beyond the moment drops are falling,” said the co-author of the study, Marco Tedesco of Columbia University. He added, “Rain in Greenland is typically delivered by warm, moisture-laden winds from the south. These clouds linger, trapping the warm air they rode in on like a blanket, driving increased melting for days after the rain subsides.”

The rain induced surface melting could accelerate the flow of glaciers, thus, delivering more ice into the seas. If further research shows meltwater seeping beneath the glaciers does speed their march to the sea, it could lead to even more ice loss than the rain itself, Oltmann said.

To give some context, if all the ice of Greenland melts, then the sea level could rise by 7 meters, enough to submerge most of New York.