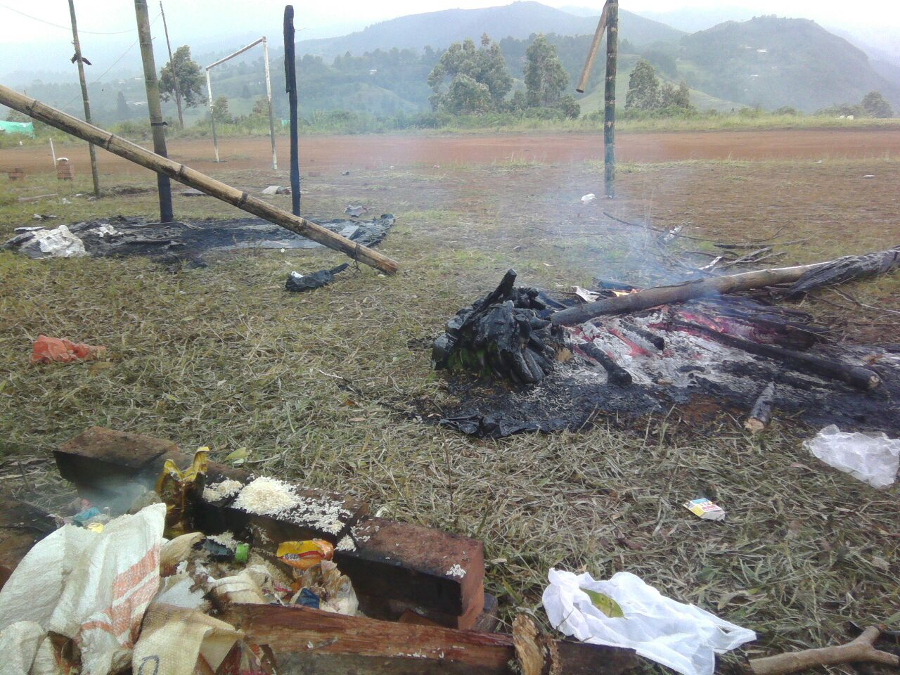 Minga camp burned to the ground by the ESMAD. Photo: Colombia Informa

Regional and national human rights and social organizations denounced that on March 16, the Mobile Anti-disturbance Squad (ESMAD), a special Colombian police unit, once again violently attacked one of the campsites of the “Minga for the defense of life, territory, democracy, justice and peace” at the Cairo and El Túnel towns in the Cajibío municipality of Cauca department, Colombia and completely destroyed it, injuring a number of people.

The campsite is located 2 kilometers away from the Pan-American highway. When the ESMAD officials attacked the campsite, the indigenous people and peasant communities were not engaged in any kind of protest activity, no blockade was being carried out, but were attending a meeting about the medical and humanitarian mission in Cajibío. The ESMAD arbitrarily entered the camps, released tear gas and then burned down the entire camp including tents, cell phones, documents, food and motorcycles of the protesters. At least 14 people present at the site were injured and 4 were arrested. Nora Hurtado, one of the participants in the Minga, was severely injured and immediately admitted to a hospital.

The Coordination of Alternative and Popular Media of South-West Colombia, condemned this illicit and violent assault by the ESMAD and the attack against William Becerra, an independent journalist and a member of political movement Marcha Patriótica and the Workers and Peasants Association of Cajibío municipality (ATCC), who was at the campsite covering the activities related to the Minga. Becerra, in his testimony to the Human Rights Network Francisco Isaias Cifuentes (REDDHFIC), said that he was kicked while he was on the ground when he refused to give up his cell phone, and hit in head with his camera that was also taken from him. Becerra was wearing clothes that identified him fully as a journalist.

Another journalist, Andrés Martínez, the correspondent of Colombia Informa, who was clearly identified with a press vest and his press credentials, was also injured in leg and his tent and equipments were also burned.

People’s media organizations across Colombia condemned this serious violation committed against people’s media journalists, who were performing their work within the framework of constitutional right to press freedom and in compliance with international standards of identification.

Earlier on March 14, the ESMAD used disproportionate force and attacked peasant communities of the Cajibío municipality during a peaceful protest on the Pan-American highway. It was reported that throughout Cauca, there was heavy presence of the ESMAD officials, who were carrying long-range firearms, mobilized in tanks and were using drones and intimidating and harassing those participating in mobilizations. There were also reports of artillery helicopters circling closely above the zone of concentration of the Minga in the El Pital town in Ancestral Sath Tama Kiwe territory.

More than 14,000 members of different indigenous communities, peasant organizations, social movements and people’s processes of South-West Colombia have been protesting since March 10. They are seeking a meeting with the Colombian president Iván Duque to demand that the State complies with all the agreements related to peasants, city-dwellers, students, workers and indigenous communities, reached with the previous governments.

The national and international social and human rights organizations criticized the Colombian national government for its unwillingness to negotiate with the communities and instead increasing forceful measures against the people exercising their constitutional right to protest.

The right-wing government of Iván Duque is also being criticized for lacking the necessary political will to continue building true peace in Colombia as well as its closeness with self-proclaimed “president” of Venezuela Juan Guaidó and its stance against the democratically elected government of Venezuela, led by president Nicolás Maduro.

Since Duque’s assumed office, the already dire social, economic and political conflict in Colombia has intensified. The assassinations of social and peasant leaders have increased with Duque’s government offering no solutions to guarantee the right to life and safety of leaders and taking no steps to dismantle the state and criminal structures responsible. Despite insistence by the National Liberation Army (ELN) to continue peace talks, the government had refused to negotiate. Recently, the president put the country’s peace further at risk by objecting to a six articles of the Special Jurisdiction for Peace (JEP), created through peace agreements between the Colombian government and the Revolutionary Armed Forces of Colombia (FARC) in 2016.

With reports from Colombia Informa