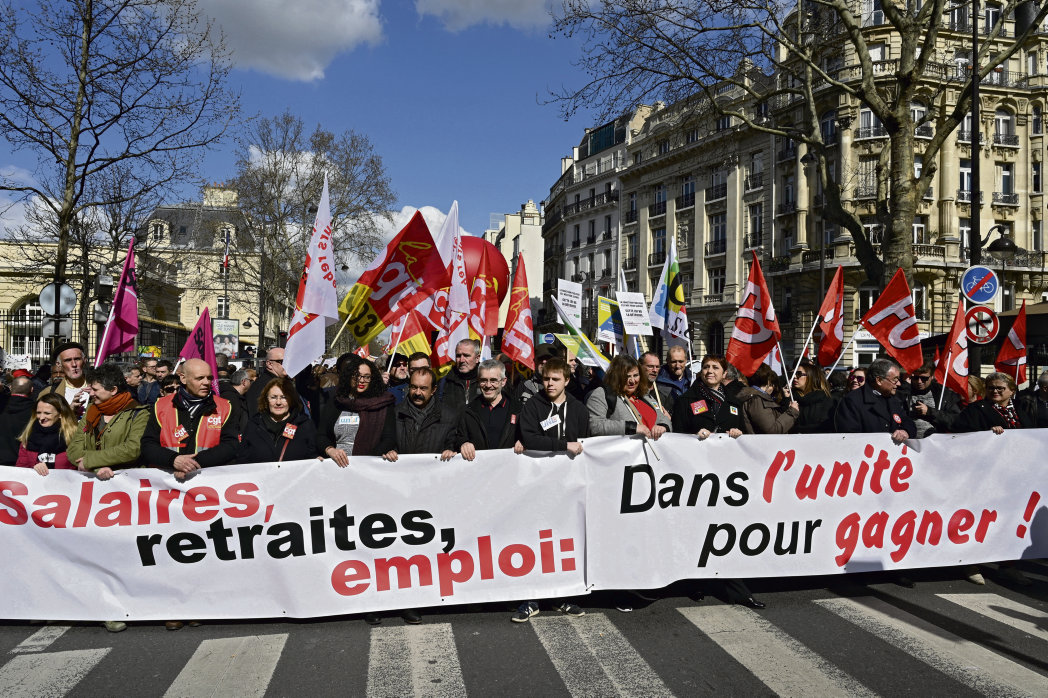 Massive trade union mobilizations took place in over 130 cities and towns of France on March 19, Tuesday. The unions raised a host of demands, including increasing wages, revaluing pensions, and the rejection of public service reform and the new round of school reforms. Reports indicated that 300,000 people participated in the nationwide call for the trade union strike and the mobilizations, with 50,000 people marching in Paris alone. The call for the protest was given by the General Confederation of Labour (CGT), FO and Solidaires unions, among others. Various unions representing teachers, youth and students took part.

The French Communist Party (PCF) extended their solidarity with the protests. Many Yellow Vests activists also joined the mobilizations. L’Humanite reported that in Lyon, about 9,000 people marched in the morning, from the Manufacture des tabacs to the Rhone prefecture, chanting slogans, including “Macron president of the rich! and “Great debate: big blah blah”.

“We are all here to defend purchasing power, whether we are from the public, the private sector or retired,” said Patricia Lasalmonie, General Secretary of FO RATP (Transport union in Paris).

“The only answer is to increase everyone’s salaries. We need real collective measures, not small individualized increases or some bonuses for some. I have to live 70 km away from Paris to stay because the city is too expensive. Thirty years ago, at the RATP, we all lived at the gates of Paris”, she added.

In a press statement explaining their participation, Union of Communist Students (UEC) said that “For several months, students have been fighting against the education reform that proposes an increase in registration fees for foreign students. This racist and xenophobic measure announces a general increase in registration fees for all students. The lack of financial commitment of the state (-10% in ten years per student) has led to a deterioration of conditions of study and degrees”.

On February 5 too, trade unions who had mobilized in France were joined by the Yellow Vests. On that occasion, they had raised a similar set of demands, as well as a minimum wage for interprofessional growth (Smic), social and fiscal justice, and the development of public services. On March 16, the Yellow Vests held a country-wide demonstration, marking the 18th week of their protest. The movement began on November 17 after the Emmanuel Macron-led government announced a hike in fuel taxes, purportedly to combat climate change. It has withstood months of police repression and emerged as a major opposition in the streets to the austerity policies of the government. Various steps by Macron, such as launching a TV debate show as a platform to discuss issues with the people, have failed to pacify the anger of the youth and working class. The Yellow Vests protests have also continued despite an anti- protest legislation made by the parliament to crack down protesters who cover their faces.

It is in this context that the increased coordination between the trade unions and the Yellow Vests may give Macron sleepless nights.