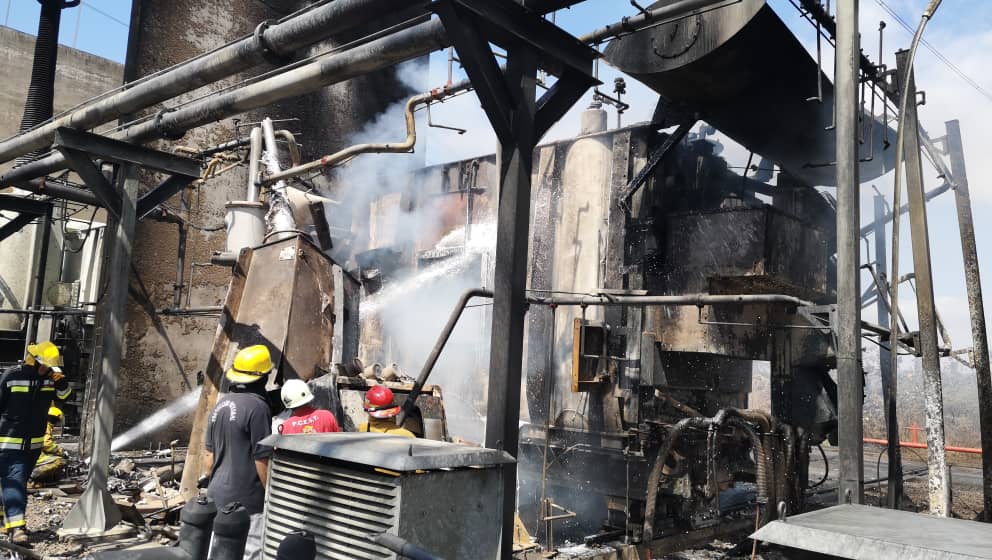 Workers at Guri hydroelectrical plant working to restore the plant after the criminal arson attack. Photo: Government of Venezuela

On Monday, March 25, two consecutive attacks on the national electrical system were reported in Venezuela. The attacks left 11 States without power while widespread outages occured in Caracas. Educational and work activities were suspended on Tuesday March 26, as power was slowly restored across the country. This is the second instance of sabotage of power facilities in a fortnight.

The first attack on March 25 occurred at 13:29 and caused an electrical failure which left three metro lines in Caracas out of service and several states without power. Vice-president of communications Jorge Rodríguez announced at 19:00 that the recovery efforts had been successful and that the majority of the electrical services across the country had been reestablished.

Later that day, at 21:47, the Guri electrical plant suffered a grave arson attack which affected three autotransformers and most of the essential transmission cables. In an official communique released on Monday night, the government of the Bolivarian Republic of Venezuela declared that “an event of this type has never occured in the history of the Venezuelan Electrical System, and it shows the lack of limits of these terrorists protected by the warmongerers that are part of the military, financial and media network of the supremacists that exercise power in the United States of America and aspire to hegemonize the global geopolitical power”.

The Guri hydroelectric plant was also targeted from March 7 to 10. The series of attacks left 80% of the population without electricity and had a grave impact on the population’s access to basic services like water, health and transportation. Due to the intensity of the attacks and its multiple layers, the recovery was slow.

The attacks on the electrical system are the latest in a series of attempts to destabilize the country, disturb the peace and look for ways to install the coup-supporting Juan Guaidó who on January 23 proclaimed himself president of Venezuela. Since January 23, the far-right Venezuelan opposition supported by the US and its Latin American and European allies has been orchestrating different attacks, media shows and sabotage, and even trying to justify grounds for a military intervention. Last week, Venezuelan opposition members in the US attempted to occupy the country’s diplomatic buildings in New York City and Washington DC though they were met with opposition by US social movements.

As power is gradually restored across the country, Venezuela remains on high alert for terrorist attacks. On March 21, Néstor Luis Reverol Torres, the minister of the people’s power for interior relations and justice of Venezuela, announced the arrest of Venezuelan citizens Roberto Eugenio Marrero Borgas and Luis Alberto Páez Salazar for organizing a terrorist cell that was planning assassinations and other attempts to destabilize the country. During a search of Marrero’s residency, Venezuelan intelligence officials found weapons and cash in different foreign currencies.

The intelligence officials also found that these individuals had hired Colombian and central American mercenaries who were trained in Colombia with the aim of carrying out assassinations of political and military leaders and judges of the Supreme Court of Justice. The mercenaries were also allegedly planning to sabotage public services.

Intelligence services will continue to conduct investigations to identify the mercenaries and dismantle other terrorist cells that seek to disrupt the peace and functioning of the country, officials said.