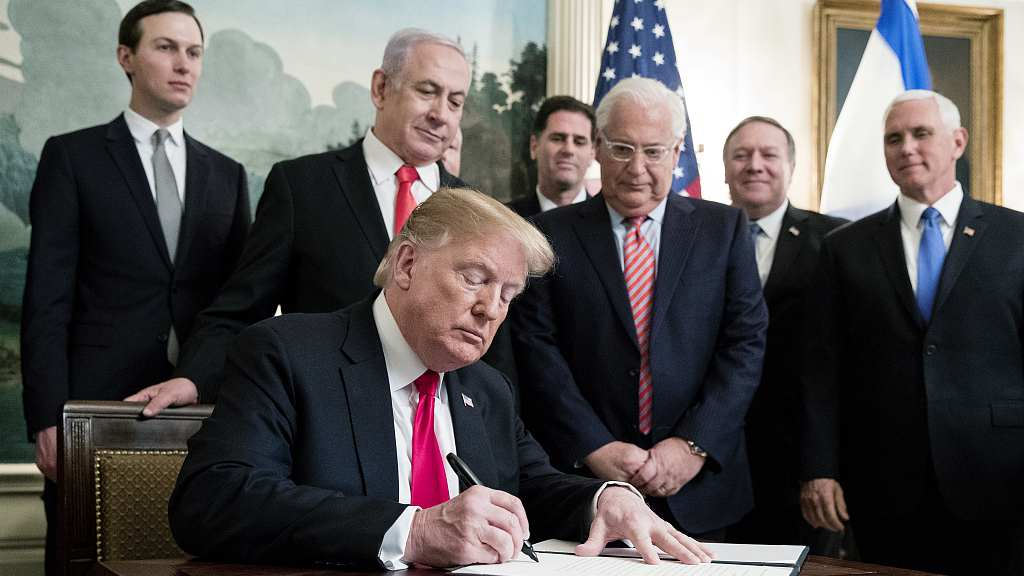 Donald Trump had initially announced his decision to recognize the occupation of Golan Heights in a tweet last week.

United States President Donald Trump on Monday formally recognized Israel’s occupation of the Golan Heights, drawing international condemnation and protests. Trump signed the proclamation at the White House, in the presence of visiting Israeli prime minister Benjamin Netanyahu. The move, which was initially announced in a tweet last week, goes against decades of US policy.

Israel captured the Golan heights from Syria in the 1967 war and annexed it in 1981. in 1967, UN Security Council Resolution (UNSCR) 242 emphasized the “Inadmissibility of the acquisition of territory by war” and called on Israel to withdraw “from territories occupied in the recent conflict.” Similarly, UNSCR 497 in 1981 said that “the Israeli decision to impose its laws, jurisdiction and administration in the occupied Syrian Golan Heights is null and void and without international legal effect” and demanded that “Israel, the occupying Power, should rescind forthwith its decision.”

Trump’s decision comes just a few weeks before the Israeli general elections that are scheduled for April 9. The decision to recognize the occupation of the Golan Heights is seen as providing a boost to prime minister Benjamin Netanyahu, who is facing multiple corruption charges. The Israeli political spectrum has over the years drastically shifted to the right, with many key political personalities making the demand for annexing not just the Golan Heights but the West Bank as well

The Golan Heights has immense strategic significance, in addition to being a key source of water for the Jordan River. The river supplies 30% of Israel’s water needs. There have also been reports of a US firm, Genie Energy Ltd., planning to drill for oil in the area. Over the years, Israel has promoted the construction of a number of settlements in the area.

Syria strongly condemned Trump’s decision, calling it a “blatant attack” on its sovereignty and territorial integrity, adding that it has a right to reclaim the Golan heights. The secretary general of the United Nations, Antonio Guterres, said he was “clear that the status of Golan has not changed.” UN spokesperson Stephanie Dujarric also reiterated that, “the UN’s policy on Golan is reflected in the relevant resolutions of the Security Council and that policy has not changed.”