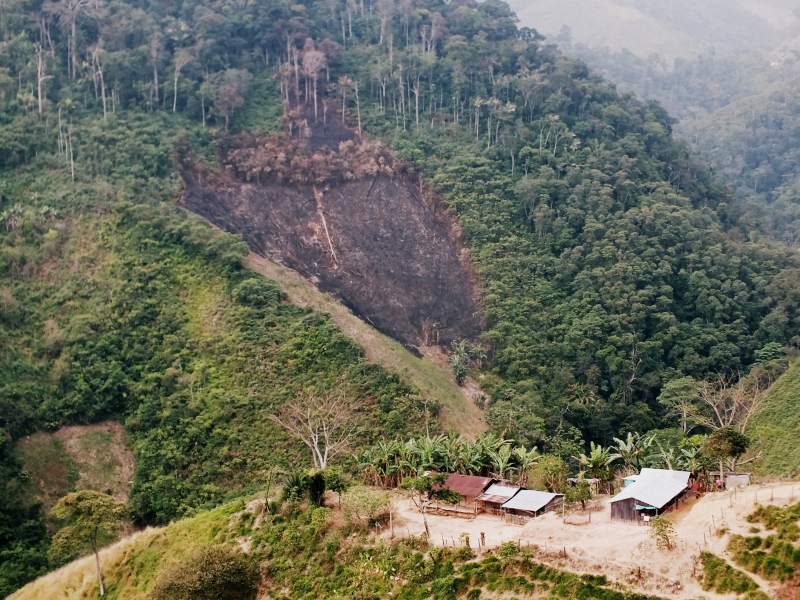 For reasons of security and at the request of those interviewed, this article does not use the full name of any peasant worker.

“We are not the owners of this land, but we are the owners of our own memory. We have resisted before and we can do it again.” Giovanni looked out over the unnamed mountains and deep, steep canyons of the Catatumbo as he spoke, while behind him, outside a one-room school built of adobe mud bricks and tin sheets, other peasants dismounted from their horses, hung up their machetes and gathered for a meeting.

Giovanni, the hard torn skin on his hands still covered in the dirt and blood stains caused by cutting sugarcane, related how he had been displaced from his home on the Caribbean coast by paramilitary violence. “I came here because life in these mountains has a bond, there is solidarity here. I don’t think about leaving because even though there is uncertainty, there is tranquility here too,” he says.

The days are short in the steep canyons of the Catatumbo, where the land drops precipitously to fast running clear water streams. The sun rises late over Venezuela and takes time to clear the swirling white mists of the cloud forest, before hitting the tin roofs of the scattered farms, precariously attached to dirt tracks trod by the peasants’ horses and pack carrying mules.

The exuberance and wealth of the Catatumbo are exceptional even by Colombia’s standards. The tropical forests, mountain rivers and the earth itself harbor an amazing diversity of wildlife, exotic plants and rare minerals. But it also hides vast quantities of coal and oil.

As in Iraq, Libya and Syria, these commodities are coveted by greedy multinational corporations whose unchecked pursuit of private profits torn from this earth has brought with it paramilitary death squads, war, and assassinations.

The violence not only almost caused the extinction of the original indigenous Bari inhabitants of the area, but also causes constant displacements of peasant workers, both Colombian and Venezuelan, throughout Catatumbo.

“We are in a war,” EJP lawyer Rommel Durán Durán emphasized in the peasant meeting, “You are suffering constant militarization and stigmatization because your land is so rich.” Durán explained that, as a result, the communities here endure systematic violations of international human rights law and the peasantry faces a high risk of disappearance.

“The state has strategies to end with the peasants. It claims to give you titles to your land, to formalize ownership, but then it will impose taxes you can’t pay, and legal judgments against you will be an excuse for the military to enter your territory to displace you in favor of mining corporations,” he explained.

“The military is no solution to poverty or misery,” Durán concluded, and evidence of this came when Colombian soldiers later interrogated an international observer at a mountain pass high above the valley, in an attempt to obtain intelligence on the peasants’ meeting.

The stigmatization in the region is constant. One army officer asserted that international organizations that worked with the peasants were “communist”, and that any financial assistance given to their community organizations would be handed directly to guerrilla fighters.

In Catatumbo, distinct armed groups are present. The confrontations between the EPL and the ELN have intensified since last year. Added to that is the militarization which manifests in the increase of soldiers of the national army.

Currently the ELN is the only armed insurgency in the country, since the FARC signed a peace agreement with the Government. The agreements which were also celebrated in foreign capitals and by international press, have not meant big changes in the Colombian territories, nor for the indigenous or peasant communities of Catatumbo.

Militarization continues being the only state presence on the region. This intensifies even more the stigmatization and abandonment, making the conditions difficult for who wants to carry out peasant work effectively.

Looking across the steep valley to a patch of burning jungle on the opposite slope, Giovanni explained that the land was being “cleaned” in preparation to cultivate coca. “Not so long ago, coffee, chocolate, plantain, banana, avocado and many fruits were grown here,” he recalled.

“I have been here for 43 years ,” Angela, a peasant worker, added, “and we used to have everything we needed, all of us ate well from what we grew. But fifteen years ago, with the paramilitaries came the coca.”

“For the peasants, the prices paid for coca are much more than for coffee or plantains. Coca also gives a greater yield for less hectares and there are more harvests each year,” he explains. “Peasants don’t need to travel for days to bring coffee to the market or pay mule drivers half the value of their harvest to do it, because the mafias come directly to the peasants to buy coca.”

“The peasant lives in a misery that is different to the poverty of the cities,” Giovanni continued. “In the city, poverty is desperate, and those there are disconnected from the land, displaced and think in an individualistic way. Although here we are forgotten by the state and denied a chance to advance – there is no electricity, road or medical clinic – but at least we can organise collectively to try to achieve a dignified life.”

Despite the conflict and attempts at military intervention, the peasants of this area – Alto Tobalí, in Norte de Santander, just two kilometres from the frontier with Venezuela – have organised Juntas de Acción Comunal, or joint action assemblies.

Asserting autonomy over their territory, activists in the peasant workers national organisation, the CNA; the MTCC and also Congreso de los Pueblos, have taken the initiative in attempting to construct a road and schools, and to encourage their comrades to diversify their crops.

“Peasants in Catatumbo have to cultivate coca to survive,” Rommel points out, “but it is the narcos who take the profits and leave the families here in poverty.”

“There is an awareness that there is a necessity to change,” adds MTCC leader David, “especially because the presence of the coca is an excuse for the military to attack. The state wants to exterminate the peasants, and refuses to even recognise us.”

“It is a conviction to be a peasant,” recognises Congreso de los Pueblos activist Jennifer. She insists in the political nature of the food and subsistence crops, since the ability to be self-sufficient allowed for resistance in the territories during confrontations and sieges. As such, the diversification of the crops, the exchange, and the support to the local market “are acts of resistance that strengthen peasant autonomy”.

As the light of the day faded in the deep canyon, the peasants in the meeting continued to trade ideas and proposals to end the reliance on coca: Cultivate corn to fatten pigs to sell pork, make contact directly with other peasants in Venezuela to trade there, have cows for milk, make artesanal panela from sugarcane, and harvest the fruits that still grow naturally here, were some of the ideas that emerged in the space.

In the darkness of the one room school without electricity, the discussion turned to organising a cooperative to share resources, a minga to collectivise the work of harvests, and thoughts of building a communal oven to bake bread.

A peasant woman, María, emphasised that “while we have many problems and living like this is not for everyone, for us it is a commitment, a life of humility, courage and strength. We have had experience of autonomy, of being self sufficient, of the collective work of a minga,” she continued, “but the state disparages us, stigmatises us as guerrillas or narcos, precisely because of our strength and independence.”

“The struggle is here,” concluded Giovanni, “it begins here, with solidarity among all of us in these mountains, and with the hope that all of us share.”

Published in Spanish on Colombia Informa

Will Andrés Arauz be the next president of Ecuador?
RECENT ARTICLES