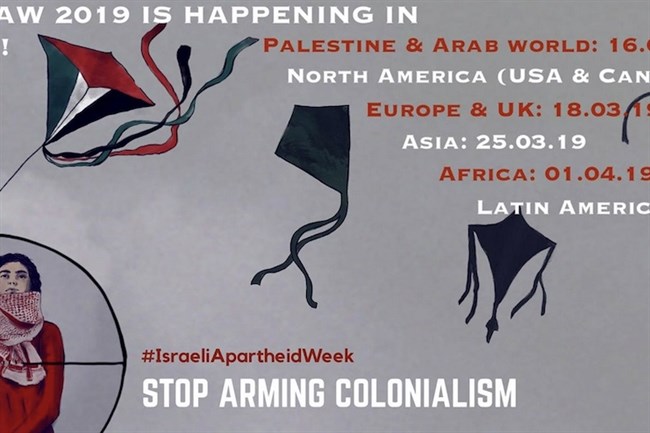 The fifteenth annual Israeli Apartheid Week (IAW) kicked off on March 16 with the sixth national Boycott, Divestment, and Sanctions (BDS) conference starting in the Palestinian city of Al-Bireh.

The week-long campaign is carried out annually to draw the world’s attention to Israel’s illegal occupation of Palestinian lands, as well as the massive human rights violations it is guilty of. IAW was marked in over 200 cities and more than 80 events were held in 40 cities in Europe, North America, and Palestine. The events included protests, lectures, film screenings, and cultural events. Additional events were held in Asia, Africa, and Latin America.

However, repressive measures have also started kicking in, backed by the Israel lobby which is powerful in various parts of the world. In Vienna, Austria, an event was canceled due to pressure exerted by the anti-BDS, pro-occupation elements. Ronnie Kasrils, a renowned South African anti-apartheid activist of Jewish descent, was scheduled to speak at Volkskundemuseum in Vienna on March 29. Kasrils is also a former minister in Nelson Mandela’s government. This event was canceled by the museum with the organizers, BDS Austria, being told that this was because of a resolution the Vienna City Council adopted in June last year to not cooperate with the BDS movement.

Pro-Israel forces also also managed to exert pressure in France where two events were canceled. One of these was organized by an anti-racist students’ group, L’Intersection, in the University Sciences Po. University authorities informed the organizers two days before their event that it had been banned. The second event that was canceled was scheduled for March 22 in Montpelier.

Condemning this cancellation, Kasrils said, “Exactly 59 years ago today, the Sharpeville massacre took place, compelling me to stand up for human rights in my country, following in the footsteps of Chief Albert Luthuli and Nelson Mandela. As a result, I was banned by South Africa’s apartheid government from attending meetings, and anything I said could not be published. How disgraceful that despite the lessons of our struggle against apartheid and racism, such intolerance continues to this day, stifling freedom of speech and association.”

However, this has not swayed the spirit and resolution of activists across the world who are determined to organist and speak out against the injustices being faced by Palestinians on a daily basis. The recent statements made by Israeli Prime Minister Benjamin Netanyahu removed any doubt about the nature of the occupying power. “Israel is not a state of all its citizens. According to the basic nationality law we passed, Israel is the nation state of the Jewish people – and only it,” he said, relegating Palestinians to second-class citizens who can never enjoy rights equal to those of Israelis. This has only furthered the resolve of organizers everywhere to increase their efforts.

Ana Sanchez, the international campaigns officer with the BDS National Committee (BNC), said, “Despite efforts by political leaders to repress it [IAW], BDS is inspiring Palestinian and international activists, academics, artists, feminists, students, church organizers, racial and social justice movements, LGBTQ advocates, and others to act in the pursuit of our respective inalienable rights. United we shall overcome.”

This year’s IAW was primarily focused on the demand of achieving a global military embargo on Israel. Israeli defence exports are a major source of revenue for the country, but their ‘testing’ is often carried out live with Israeli forces using them to suppress protests in Gaza. The new report on the Gaza march of Return by the UN said that close to 200 Palestinians lost their lives during peaceful protests because of indiscriminate firing and use of weapons by Israeli forces.

A BDS activist and Israeli Apartheid Week organizer from Gaza, Salam Bawab, said, “Israel is violently repressing our Great March of Return for an end of Israel’s siege and for our basic rights, with Israeli snipers killing hundreds of protesters and injuring thousands more. Israel markets the weapons and technology it’s using to attack protesters here as “field-tested.”

Governments are enabling Israel’s violations of international law and war crimes against Palestinians through their support of Israel’s military industry.”

Recognizing the importance of securing a military embargo, Sukrita Lahiri, a research scholar in India’s Jawaharlal Nehru University said, “Organizing Israeli Apartheid Week is urgent for us in India because our own struggles for justice and democracy are connected to the Palestinian freedom movement. India is the biggest importer of Israeli arms in the world, and therefore supports Israel’s military occupation directly.”

This global solidarity shows that despite Israel’s attempts of suppression, people are opposed to the apartheid power and willing to help Palestinians in whatever way they can in their fight for justice. “Israeli Apartheid Week events across five continents demonstrate the rapidly growing grassroots support for the nonviolent, anti-racist and intersectional struggle for Palestinian freedom, justice and equality,” said Sanchez.