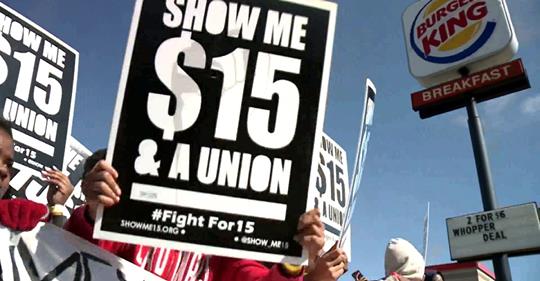 The Fight for $15 campaign has been organising for a minimum wage of 15 USD in USA.

The US State of Maryland passed a bill on March 28 to raise the minimum wage to 15 USD per hour by 2025. The new law, passed by the Democrat-controlled General Assembly of the State, stipulates that employers with 15 or more employees have to schedule the pay rise such that it reaches 15 USD in 2025, while smaller companies will have to pay 15 USD starting in 2026.

The Baltimore Sun reported that the minimum wage bill was approved by a margin of 96-43 in the House of Delegates, and by a 32-15 vote in the Senate.

The activist group, Fight for $15, which has been organizing for a minimum wage legislation, said, “This bill will help more than half a million Marylanders, and is a major step towards breaking generational poverty and creating a brighter future for the next generation of Marylanders”.

US Senator Bernie Sanders applauded the new bill and tweeted, “Just a few years ago, we were told a $15 an hour was ‘too radical.’ Well, today, Maryland became the sixth state to send the loud and clear message that a job should lift you out of poverty, not keep you in it.”

“We’re not done,” Sanders added. “Next we will pass a national $15 minimum wage.”

Earlier, various activist groups in the US observed March 26 as a national day of action to support the #RaiseTheWage Act of 2019. As the current minimum wage at the federal level has been stuck at $7.25 since 2009, the Democrats are now pushing for a Raise the Wage Act which would double the federal minimum wage by 2024.

Common Dreams cited a statement from the National Employment Law Project (NELP) which said that raising the federal minimum wage to $15 an hour “would lift pay for a quarter of all workers in the United States, including those in the 21 states stuck at the current federal level of $7.25.”

As of now, six States in the US – Maryland, Illinois, New Jersey, New York, California, and Massachusetts – and Washington DC have passed legislation to ensure a minimum wage to 15 USD per hour.