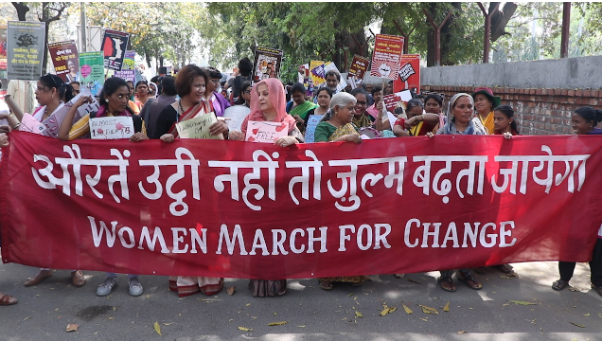 The marchers called on voters to resist attacks on the pluralistic culture of India.

On April 4, hundreds of women carried out a march in Delhi against the anti-Dalit (the formerly untouchable castes), anti-worker and anti-women policies of the far-right Hindu nationalist government of India. The protesters marched under the slogan,  “If women will not rise, oppression will.”

Noted activist Shabnam Hashmi, said the ‘Women March for Change’ will be carried out in 100 different places across 20 States of India. “The march is an open call to voters, especially women, to exercise their vote wisely and counter the blatant attack on the pluralistic idea of India, the already shrinking space of dissent, [and] to save our institutions and our democratic character,” Hashmi said. Parliamentary elections in India begin on April 11 and conclude on May 23. The process will determine the fate of the Narendra Modi-led government.

Hundreds of women from across sectors marched, arm in arm. Those in the march came from all walks of society, including domestic workers, manual scavengers university students and members of civil society. They sang songs and raised slogans, sending out a message to the Modi government that they would not accept the politics of polarization, which seeks to pit the majority Hindu community against minorities..

“This government led by Narendra Modi has attacked the rights of women, with its campaigns being nothing but an eyewash. The funds allotted for a number of schemes were mainly used for publicity. Today, the women have finally come out openly, to call out the government”, another participant, Amrita Johri, told NewsClick.

For Swastika Sanghamitra, who works on Dalit rights, “The women from the marginalized sections, i.e. Dalits and the Muslim women, have suffered the most violence under the Bharatiya Janata Party government.” Another activist added, “Not just the women, the violence against the minority (LGBTQ) community and trans-men and women has seen an unprecedented increase, but the government has maintained silence on all these matters.”

Apeksha Priyadarshini, who took part in the march, said, “[The government] has defended and fielded candidates with records of sexual harrasment and rapes,” she added.

Ahead of the elections, the “Women for Change” campaign is planning to reach out to as many women voters as possible in order to motivate them to vote for the candidates who can do justice to their issues and ensure the removal of the “patriarchal and fascist government.”