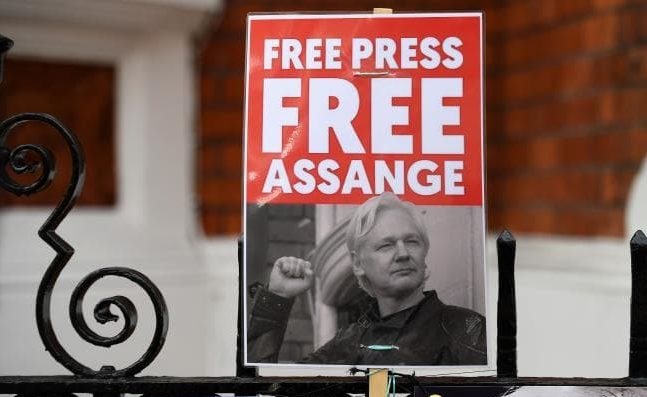 Protesters gathered outside the Ecuadorian embassy in London after Wikileaks said on April 5 that Julian Assange may be expelled from the embassy in the coming days and handed over to the the UK police. Citing a  “high level source within the Ecuadorian state,” Wikileaks tweeted that an agreement on his arrest had already been reached between UK and the Ecuadorian government. Ecuador’s foreign ministry, has however, denied that there are any plans to hand over Assange.

It was revealed last year that a secret indictment has been prepared against Julian Assange in the US, most likely on charges of espionage which carry the death sentence. Recently, whistleblower Chelsea Manning was sent to jail after refusing to testify against Assange in a grand jury hearing. This is despite the fact that Manning had already served a jail term and was released after being granted a pardon by president Barack Obama. There have been a number of reports of a deal having been reached between Ecuador, the UK and the US over handing over Assange to the latter.

The latest developments come after Wikileaks revealed on March 26 that Ecuador’s congress had initiated an investigation against president Lenin Moreno after the INA papers were leaked in February.

These set of documents, regarding the operations of an offshore tax haven, INA Investment Corp, created by the president’s brother, contain a “trove of emails, phone communications and expense receipts are said to link the president and his family to a series of corrupt and criminal dealings, including money laundering and offshore accounts,” according to a recent article published by Wikileaks.

While Wikileaks has not published a single document regarding the INA papers or referring to the president’s family, the country’s vice-president, Otto Sonnenholzner, was quick to allege that Wikileaks was behind the information expose.

Foreign minister María Fernanda Espinosa further added, “We will not allow [Assange’s].. website to interfere in the private channels of communication of the Ecuadorian head of state.. he is biting the hand that feeds him.”

Julian Assange’s lawyer, Carlos Poveda, pointed out, “Remember that WikiLeaks has an internal organization and Mr. Assange is no longer in the editor.” In fact, Assange has been isolated from all connection to the outside world since March last year, when his internet connection was cut off by Moreno’s government.

By then, Assange had already been holed up in a small room in Ecuador’s London embassy for almost five years after the previous progressive president, Rafael Correa, had defied the US and UK by giving asylum to Assange in 2012.

Moreno, Correa’s successor, however began to move away from the latter’s policies, both domestically and internationally. One of the key planks of this shift was the increase in restrictions on Assange.

Months later, in December, New York times reported that discussions were underway with the aim of reaching a deal, in which Ecuador will hand over Assange, and in exchange, the US will waive off the former’s debt obligations to it.

In the aftermath of the INA papers scandal and the government’s attempt to blame Assange, the former consul of Ecuador, Fidel Navarez criticized the government saying, “The recent reaction of the Ecuadorian government to the INAPAPERS scandal could not be worse. Instead of clarifying and making the issue transparent, the government spokesmen, to divert attention from the still timorous official investigations, position a monumental lie, accusing WikiLeaks of having leaked communications and images of President Moreno’s family circle.”

“Despite being an outrageous accusation”, he added, “the farce has reached the point that the Ecuadorian National Assembly has issued a resolution to investigate Julián and encourages the government to take measures to “safeguard national interests.” In short, the government seeks a false pretext to end the asylum and protection of Julian Assange.”