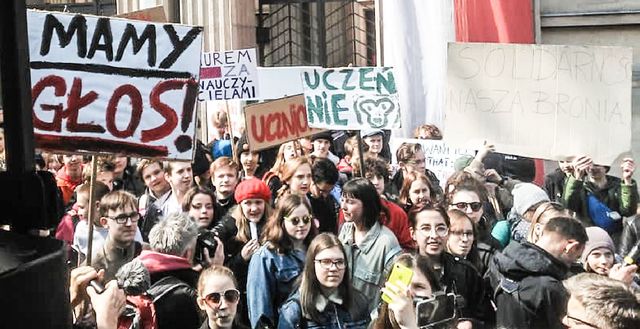 Students carrying signs in support of their teachers at a school in Gdynia. (Photo: Strajk Uczniowski)

School teachers in Poland went on strike on April 8, demanding a long-awaited pay rise. This is the first major strike by teachers since 1993. Even though the government had promised some extra pay on April 5, the Polish Teachers Union (ZNP) stuck to its demand of a monthly salary increase of 1,000 zlotys (USD 262).

ZNP, which is the largest teachers’ union in Poland, said that teachers in 74.29% of schools and kindergartens (15,179 out of 20,403) are participating in the strike. On April 9, hundreds of students protested outside the ministry of education in Warsaw, voicing their support for the countrywide teachers’ strike.

A report by EuroNews stated that teachers’ salaries in Poland range between 3,045 zlotys (USD 802) and 5,603 zlotys (USD 1,475) per month. According to official data published in February, the average corporate salary in Poland stood at around 4,949 zlotys (USD 1,303).

The World Socialist Web Site noted that 30 years after the restoration of capitalism in Poland, teachers and their families are forced to live on low wages. Meanwhile, prices for basic food items and clothing are similar to those in Western European countries. There has also been a massive reduction in the teaching workforce over the past few years. While there were about 670,000 teachers in Poland a few years ago, now they number just around 400,000.

The public sector workers in the country demanded an immediate fulfillment of promises, including salary hikes announced by the Law and Justice Party (PiS) in February. Earlier in March, workers at Polish courts and prosecutors’ offices also demonstrated, demanding higher wages and better working conditions.

The move towards a neoliberal model in 1990s drastically increased inequality in the country. A report by Poland’s central bank noted that in 2016, the top 10% of households held as much as 41% of total net assets.  Meanwhile the whole the net value of the assets of the bottom 20% households accounted for less than 1% of all household assets. The teachers’ strike follows a two-week strike by workers at the national airline, LOT and Amazon workers in the country.