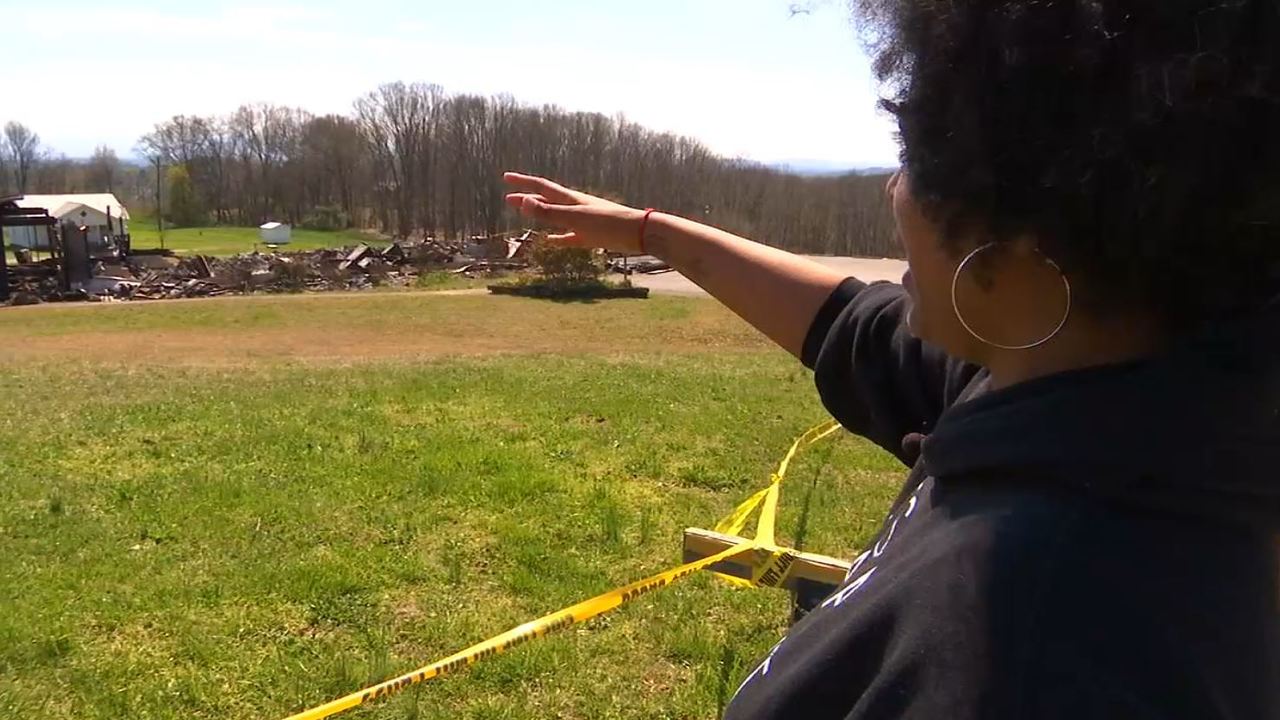 Highlander Center's co-director Ash-Lee Woodard Henderson pointing to the building that was burned.

The fire that burnt down the Highlander Research and Education Center on March 29 in rural Tennessee is slowly gaining attention from federal authorities. A communique, put out by the historic activist training center on April 2, stated that they “found a symbol connected to the white power movement spray-painted on the parking lot connected to the main office”. While the authorities are yet to confirm if the attack was a case of arson,  the discovery of the symbol has caused much concern among the people of Tennessee, as well as State and federal officials.

The spray-painted symbol that looks like a tic-tac-toe is identical to the one painted by the Christchurch attacker on the two mosques he attacked. The symbol has also been making the rounds in various alt-right and white supremacist spaces and rallies. This has prompted federal authorities to look into the matter, with Tennessee congressman Steve Cohen requesting the justice department’s involvement. The Federal Bureau of Investigation (FBI) is reportedly already keeping tabs.

The fire caused significant damage and is reported to have destroyed some historic documents and archives related to the civil rights movement. As investigations were underway, the center put out a statement indicating the likelihood of a hate crime: “Highlander is a sacred place built by communities of the most affected people and it has become a home to those who believe in freedom and collective liberation here in the south, across the U.S and around the world. Because of our history we are not surprised that this space, one where marginalized people working across sectors, geographies and identities show up consistently, has been repeatedly targeted over our 87 years of existence.”

The Highlander Center, founded in 1932, has been targeted by different racist and reactionary forces in the past. The center runs training programs for activists and community organizers. Some of its alma mater includes Martin Luther King Jr., Rosa Parks, Ralph Abernathy and members of the Students Nonviolent Coordinating Committee (SNCC). In the post civil-rights period, it widened its horizons to work and organize among a cross-section of groups, like Latin Americans, immigrants, working class and poor whites, as well as the LGBTQ community.

The statement also pointed to the recent spread of hate crimes and proliferation of white supremacist organizations in Tennessee and across the US, highlighting the election of Donald Trump in 2016 as a key moment:

“Since 2016, the white power movement has become more visible, and we’ve seen that manifest in various ways, both subtle and overt. They’ve targeted and exploited working class and cash-poor white communities searching to find a sense of belonging, dividing them from people who support efforts to improve the material conditions of all people. Their attempts to increase in size and scale impact the realities of our daily lives here because the majority of Black people in this country reside in southern states. As islamophobic attacks become more prevalent, we’re hyper-aware that the majority of Muslims in this nation are Black people. We know that anti-Semitic attacks have rocked the Jewish community. We know that anti-immigrant forces are consolidating, attacks on reproductive freedoms abound and the politics of the federal government’s executive branch are speaking to the privilege-based fears of the white power movement, emboldening them in ways the 21st century hasn’t seen.”

In 2017, Tennessee saw several white supremacist rallies, including an infamous “White Lives Matter” rally in October. That rally was confronted by a counter-rally that outnumbered it. The Southern Poverty Law Center has documented a sudden increase in hate groups, all with some type of association with the white nationalist ideology since Trump’s election. In Tennessee, there are around 36 active groups. Several of them opened a State-wide chapter in 2017. Among these is the controversial Traditionalist Workers Party that has organized several violent white nationalist rallies in Indiana.

The investigation into the possible arson attack on the Highland Center is already underway, with the Jefferson County Sheriff’s Office and the State-level investigation agency Tennessee Bomb and Arson. Sheriff Jeff Coffey of Jefferson County stated that the FBI was involved in the investigation from the very initial stages due to the history attached to the center and the place it continues to occupy among the progressive movements in the US.

In the aftermath of the fire, people from across the world have shown their solidarity with the Highlander Center with messages of support, donations and sharing memories of their experiences at the center and highlighting the importance of the space.