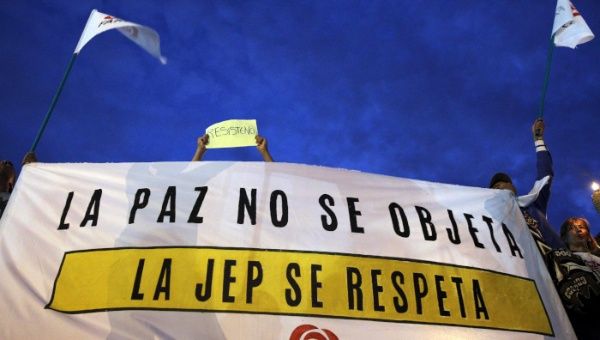 Organizations and social movements across Latin America have been demanding that president Duque honor the JEP.

On April 8, with an overwhelming majority of 110 votes in favor and 44 against, the lower house of the Colombian Congress rejected the objections raised by president Iván Duque to the statutory law of the Jurisdicción Especial por la Paz (JEP) [Special Jurisdiction for Peace]. “Viva la Paz” or “Long live Peace”, resonated across the house as the general secretary of the lower house, Jorge Humberto Mantilla, read out the result.

The JEP is a transitional justice system agreed upon in the peace agreements signed between the government of former president Juan Manuel Santos and the Revolutionary Armed Forces of Colombia (FARC).

Now, the Senate will decide whether to reject or approve the objections. If it rejects the objections, the president will be forced to sanction the bill. If the Senate approves them, the statutory law would collapse and the JEP will continue to exist but its functioning will have to be redefined.

On March 10, Duque objected to 6 of the 159 articles of the Statutory Law of the JEP which was presented to him for his approval. Before being presented to the president, the bill was debated and passed by the legislature in 2017 and then revised by the Constitutional Court in 2018. The JEP, which was signed in 2016 in Havana, Cuba, establishes a special tribunal which would investigate, judge and sentence those responsible for the war crimes committed during the five decades of armed conflict between the Colombian security forces and the guerilla group.

Duque’s objections were considered as an obstacle to the Colombian peace process and were criticized nationally and internationally. Social and human rights organizations and activists across the globe expressed their support for the peace agreements.

Recently, La Vía Campesina (LVC) held its Third International Solidarity Mission to Colombia in Bogota from March 29 to April 2 with a call on the government to honor the peace agreements. Over 20 delegates from 15 countries and a delegation team of the Social Movements of ALBA took part in the international mission. The delegates expressed their solidarity with the people of Colombia in their struggle for peace.

On March 18, tens of thousands of citizens, as well as members of social movements, human rights organizations and political parties, mobilized across Colombia in support of the JEP. Through the ‘Pact of Peace’ promoted at the rally in Bogota, they urged the Colombian Congress to fulfill the constitutional mandate of peace, reject the objections raised by the president and approve the JEP. On the same day, marches in support of the JEP and peace in Colombia were also carried out in Argentina, France, the UK and the US.

The United Nations also expressed its support for the JEP through an official communiqué. The Continental Peace Commission of Social Movements of ALBA also expressed its rejection of Duque’s decision. Cuba and Norway, the guarantor countries of the peace process, through an open letter, urged the Colombian president to not object to the peace agreements and sanction the law.