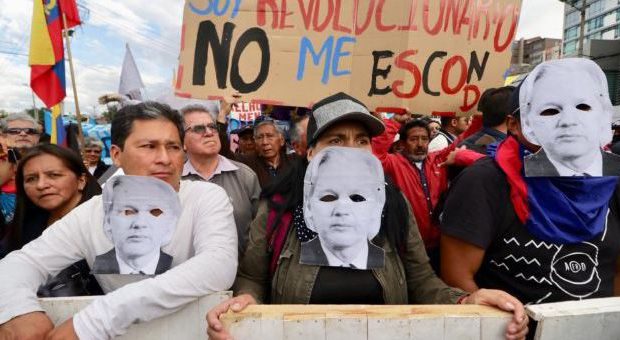 Mobilization in Quito on April 16 against the government of Lenín Moreno. Photo: Resumen Latinoamericano

On April 16, under the banner of “not one right less,” hundreds of Ecuadorians mobilized in Quito against the economic measures imposed by the government of president Lenin Moreno, massive dismissals and the withdrawal of the asylum granted to WikiLeaks founder Julian Assange.

“We are [here] in rejection of the misgovernment that exists, as well as his [Moreno’s] betrayal of the government’s plan for which he was elected. He has sold the country to the IMF. He is adopting measures which are against the Ecuadorian people, which caused a rise in costs of petrol” the provincial coordinator for Lofa city of the Citizen’s Revolution Movement Marck Íñiguez said during the march.

Recently the government signed a USD 4.2 billion deal with the IMF, announcing a set of austerity measures such as increases in the fuel prices, privatization of public companies, massive layoffs of public employees and discontinuation of more than 25,000 public services in health care and education sectors. Measures which have plunged many in Ecuador into economic insecurity.

The protesters gathered at the El Arbolito park, located in the center of the city and marched towards the Carondelet palace, the seat of the central government. “Out, Moreno, out!”, “Moreno is a traitor”, “Freedom for Assange”, were some of the slogans that were heard in the mobilization. The protesters marched with banners and placards that read “Moreno is a corrupt person”, “the country cannot be sold”, “No to IMF”, “Julian Assange is an Ecuadorian”, “Assange will be your nightmare”, etc. The call for the march was given by various social organizations and the former Ecuadorian president Rafael Correa.

Near the presidential palace, the protesters met with brutal police repression. Police officials pushed and hit the protesters. They even threw tear gas bombs and unleashed dogs and horses to disperse the crowd. Several people were injured and affected by the tear gas bombs.

A week ago, on April 11, Assange was dragged out of the Ecuadorian embassy by the London police because of an extradition request from the US. Moreno claimed that Assange had violated the terms of asylum. However, numerous reports indicated that he did so in exchange for economic concessions. Correa said that it was an act of cowardice and denounced that the withdrawal of the asylum to Assange was a violation of the international laws.

The same day, privacy and internet security developer and activist Ola Bini, a Swedish citizen, was arrested in the international airport in Ecuador as he was about to board a flight to Japan. He was detained for nearly 30 hours without a hearing and only had access to a lawyer after 17 hours. Additionally, the Ecuadorian authorities did not advise the Swedish embassy of his arrest, violating international protocols. His arrest and 90-day mandated detention have been widely denounced by the tech community across the world.

Assange’s arrest and Moreno’s subservient stance have been condemned nationally and internationally. Various organizations, journalists, authors, activists, and other individuals from across the world noted that his detention and the nature of the charges against him is an attack on press freedom and investigative journalism that exposed the secrets of the powerful.