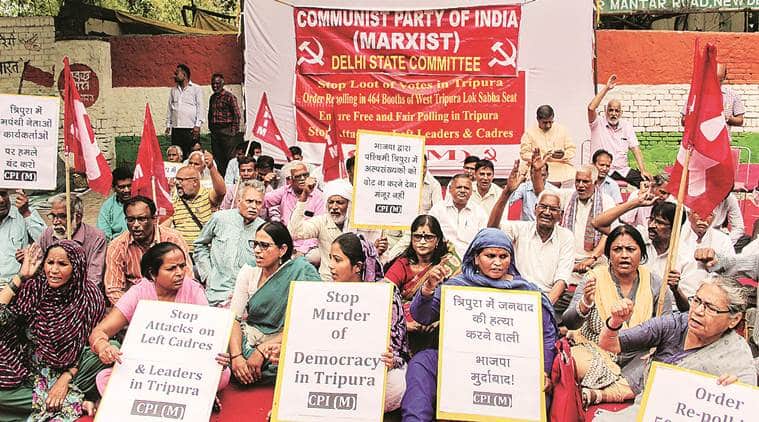 The CPI(M) held a protest in India's capital, Delhi, protesting the violence during elections in the State of Tripura.

Two of the seven phases of the Indian general elections have ended, with various incidents of violence and voter suppression being reported from different parts of the country. While the violence was minor in some areas, it was significantly more widespread in the States of West Bengal and Tripura, where Left party cadre and activists were attacked.

The seven-phase elections are spread over the duration of an entire month, and will end on May 19. The first phase of the elections was held on April 11, with voting taking place in parts of 18 States and 2 union territories for 91 constituencies. The second phase concluded on April 18, with voting in 11 States and one union territory for 92 constituencies. The incumbent far-right Bharatiya Janata Party (BJP), led by prime minister Narendra Modi, is seeking a second term.

Violence in West Bengal and Tripura

In West Bengal, 24 polling booths were reportedly captured on April 18 by men belonging to the Trinamool Congress (TMC), which rules the State. Polling agents of the opposition were not allowed entry into the booths and fake votes were reportedly cast in favour of TMC candidates.

Mohammed Salim, member of parliament belonging to the Communist Party of India (Marxist) ,CPI(M), rushed to one of the booths on the morning of April 18 in order to stop TMC goons from capturing it. In the process, his driver and his assistant were beaten up, one of them with a brick. His car was also damaged.

Addressing the media after the incident, Salim said, “Since morning, in 24 booths, polling agents were not allowed to enter.I made calls from 7 am to 8:30 am but got no response from the election commission, other officials and observers. They kept saying ‘’We are there.’ People were helpless… In every booth I saw goons had surrounded the voters and in the lines, there were more of these anti-social elements than voters. And when I went inside. I saw that the [TMC} cadre (with weapons) were forcing ordinary people to vote for them.”

The CPI(M)-led Left Front was in power in West Bengal from 1977-2011. During this time, it enacted a number of historic policies, such as land reform. The Trinamool Congress, which succeeded it, has indulged in large-scale violence against the left and its cadre. In February, over a million people gathered in the capital of West Bengal, Kolkata, to declare their intent to defeat fascism and authoritarianism, represented by the BJP and the TMC.

In Tripura, voter suppression and violence was reported from more than 500 polling booths during the first phase of elections on April 11. It was reported that in various villages, people belonging to minority groups were surrounded  and not allowed to cast their votes. Poll-rigging was also reported. Cadre belonging to the BJP, which rules the State, are believed to have been responsible for these incidents.

Tripura is a small state in India’s north-east region consisting of only two constituencies, West Tripura and East Tripura. West Tripura went to polls during the first phase, and East Tripura was scheduled to vote in the second phase. However, after the extensive reports of violence, and a protest held by CPI(M) members in the capital, New Delhi, the Election Commission of India decided to postpone elections in East Tripura to April 23. The ECI has ordered additional security during voting.

In Tripura too, the Left Front was in power from 1993-2018. The BJP, which succeeded it, has unleashed a campaign of terror against supporters of the left.

In the conflict-ridden Kashmir valley, voter turnout remained low amid calls of boycotting the elections. Many parts of Kashmir witnessed shutdowns, and there were clashes in multiple places between protesters and security forces outside polling booths.

In response to the protesters calling for the boycott of the elections and demanding a resolution to the conflict, security forces used live ammunition, pellets, and tear gas. It was during one such incident on the first day of the elections that a 13-year-old boy, Owais Mushtaq, lost his life after being hit by pellets.

Sporadic incidents of violence were also reported from certain other States. With five more phases of voting left, activists fear many more instances of such violence may happen across the country.

As Maimoona Mollah from the All India Democratic Women’s Association said during the CPI(M)’s protest against the violence in Tripura, “Elections are meant for people to exercise their right to elect their representative. If you are prevented from exercising your right, that in itself is an attack on democracy.”