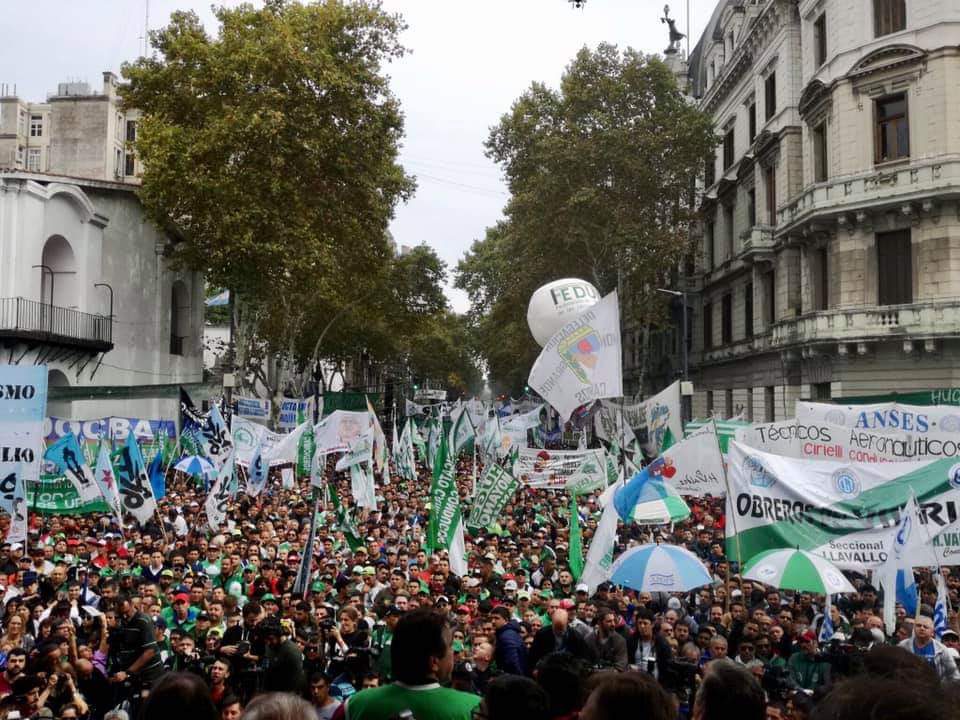 On April 30, as part of the National Strike, hundreds of thousands of workers, small and medium scale businesspersons and social leaders mobilized across Argentina against the economic policies of the government. “We have no other way. Plan to Fight. General Strike. Economic policy must change,” they chanted.

In Buenos Aires, over 200,000 marched to the Plaza de Mayo. The protesting workers interrupted traffic between the Crovara and General Paz avenues. The La Noria bridge and Pueyrredón bridge were also blockaded.

The strike affected transportation services the most. All the subway and metro lines were shut. Some 80 bus lines and several trains did not operate. In case of airlines, no domestic or international airline operated, except for the Flybondi. Bank workers, public administrators as well as university professors joined the strike. The attention in public hospitals was similar to that on a Sunday.

The central agenda of all trade unions in Argentina today, whether agricultural, banking, educational or transportation, is to fight against rampant inflation, mass dismissals, loss of purchasing power and growing poverty. For the last several months, the Argentinian working class has been continuously mobilizing to reject the harsh economic adjustments and the increase in tariffs of basic public services, imposed by the right-wing government of the Cambiemos coalition, led by president Mauricio Macri. Marches, demonstrations and protests have been staged across Argentina against the neoliberal policies of Macri that have led to concentration of wealth and destruction of national industry.

Several trade union leaders addressed the protesters. Pablo Micheli, the general secretary of the CTA-A, in his speech, referred to the upcoming general elections in Argentina. He said that the workers want the former president Cristina Fernández de Kirchner back. “We want Peronism and a national and popular government to come back.. Do not give up struggling [even for] a minute and accompany the road to elections with the workers’ movement on the street,” he said.

Following the massive mobilization, many continued their day of struggle and marched to the Venezuelan Embassy where members of the Venezuelan right-wing opposition were attempting to occupy the embassy, accompanying the coup d’état attempt staged by Juan Guaidó. Activists from Argentine organizations were inside and outside the embassy safeguarding it from attacks.  After several hours, the Police (who had been present throughout the day protecting the group who wanted to occupy the embassy by force) began to repress the mobilization and attacked activists with tear gas and batons. Several were injured and four were arrested and have since been set free.

Mauricio Macri: false promises and a return to the IMF

Macri’s 2015 campaign for president was centered around messages of change and progress, he promised to reduce inflation and provide better employment opportunities. However, his promises fell flat, his government’s policies created an unstable and vulnerable economy which tanked when the the US Federal Reserve Bank raised interest rates. In 2018 alone, the Argentine peso’s value fell more than 50%. According to the National Institute of Statistics and Census of Argentina (INDEC, Argentina experienced a 47.6% inflation in 2018, the highest in past 27 years.

Macri’s response to the economic crisis was to put the Argentine economy and people at the mercy of the IMF. In May 2018, Macri announced that his government would initiate negotiations with the International Monetary Fund (IMF) for a $30 billion loan to tide over the country’s financial crisis. A month later after Macri met with Christine Lagarde, the IMF managing director, they reached an agreement on a USD 50 billion loan, in October 2018 the amount was increased to USD 57 billion.

As expected, the IMF demanded that Argentina reduce its fiscal deficit and apply severe budgetary adjustments between 2018 and 2019. Across the board, there have been mass layoffs in the public sector, the budgets for education, health and social welfare have been slashed and the tariffs have been increased on basic services such as water, electricity, residential gas and transportation, popularly referred to as tarifazos. Figures published by the Citizen’s Unity Party, a coalition of Argentine left-wing organizations, show that the tariffs of electricity have increased by 3624%, natural gas by 2401%, water by 1025%, road tolls by 1118%, inter-municipal train tickets by 601%, train tickets by 500%, metro tickets by 400% and buses by 494%.

With tens of thousands out of work, access to quality health and education threatened due to budget cuts, loss of social welfare policies, rapid devaluation of the national currency, and costs for basic services soaring, the situation for the Argentinian working class has become a matter of day to day survival.

The widespread misery has fueled the resentment of Macri across sectors and across the country. The symbolic impact of a return to the IMF is also key to understanding their disgust for Macri. The IMF was responsible for the serious economic and political crisis that Argentina faced in the 1990s which led to a popular insurrection in the country.

In the face of crisis, more organization and more mobilization

Today, in Argentina, all working sectors, agriculture, banking, business, education, health care, transport, workers of the people’s economy, and others, have been taking the streets against Macri’s policies of hunger, misery and despair. Alliances and fronts have been forged between trade unions, social and political organizations, cultural groups, student movements and community organizations in order to come up with strong campaigns and plans of mobilization that have the capacity to build power and momentum and defeat the regressive neoliberal government.

José Rigane, the assistant general secretary of CTA-A, told Peoples Dispatch in March that the central focus of the trade unions and social movements has been “to be on the streets”. He said, “This does not solve the fundamental issue, but it allows confronting the situation in a unified way.” He argued that it is important for all Argentines to unite and “confront this government and regain sovereignty and change the energy model that is based on privatization and foreign investment.”