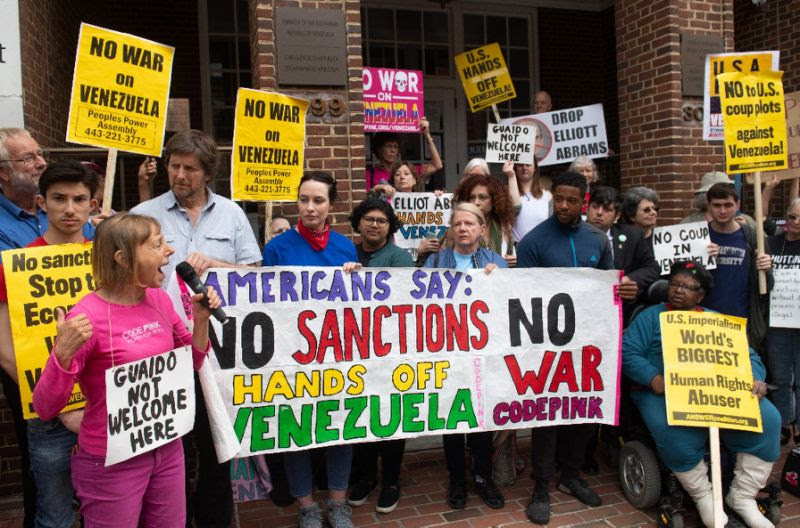 Medea Benjamin and other members of the Embassy Protection Collective outside the Venezuelan Embassy in Washington D.C.

Right here in Washington, D.C., an unprecedented showdown is unfolding. Venezuelan supporters of self-declared interim president Juan Guaido have been trying to take over the Venezuelan Embassy. This goes against international law, the wishes of the government in control in Venezuela, and the dogged determination of a group of U.S. citizens called the Embassy Protection Collective, who have been living in the embassy since April 15.

A takeover of the embassy of a sovereign nation whose government holds power and is recognized by the United Nations would be illegal according to the 1961 Vienna Convention on Diplomatic Relations, which says that diplomatic premises are inviolable and the receiving State must protect the premises against any “intrusion, disturbance of the peace or impairment of its dignity.”

This has nothing to do with whether one likes Nicolás Maduro or considers the Venezuelan elections fair. My Saudi friends in Washington, D.C., hate Mohammad bin Salman—a man who has never been elected by anyone—but the U.S. government would never let them take over the Saudi Embassy. Chinese dissidents say that “winners” of Chinese rigged elections—with only the Communist Party allowed to exist—should not be recognized by the rest of the world, but they would never get access to the Chinese Embassies. Likewise for dissidents from Egypt, Honduras, Syria, Zambia, Congo, Romania, Kazakhstan, Uzbekistan, etc.—all countries with highly questionable elections, to put it mildly.

The inflammatory act of handing over the Venezuelan Embassy to Guaidó supporters would also have the potential to dramatically escalate the conflict between the United States and Venezuela. If the Trump administration were to allow this, the Maduro government would likely reciprocate by taking over the U.S. Embassy. This could be just what war hawks John Bolton and Elliott Abrams are looking for as a justification for a U.S. military intervention.

Determined to avoid another war, a group of U.S. peace activists sought and received permission from the legitimate Venezuelan government to form an Embassy Protection Collective. Since April 15, a group has been living in the embassy, sleeping on couches and floors, while outside supporters have been providing supplies and joining them for meals and educational events.

At first the Venezuelan diplomats were still working in the building, but the State Department ordered them to leave the country by April 25. Since then, we have been alone, holding the embassy so that a diplomatic solution can be worked out similar to the situation with Iran, where the U.S. Interests Section in Tehran has been operating under the Swiss Embassy and the Iranian Interests Section in Washington, D.C., is operating under the Pakistani Embassy.

On May 1, however, our peaceful presence was violently besieged by angry Guaidó supporters. Designed to coincide with Guaidó’s call for a May 1 uprising, his U.S. representative Carlos Vecchio showed up for a press conference and quickly left, leaving behind an unruly, violent mob. This group has been surrounding the embassy since then, creating mayhem and not allowing food, medicines or supplies to the people inside.

Even more shocking, the Secret Service, which is tasked with guarding embassies, has allowed this to happen. They have had a constant presence at the embassy since May 1 but have stood by as this group damages the building and threatens the peace activists inside and outside. They have allowed the opposition to bang on the doors with sledgehammers to try to break in, post signs all over the property against the wishes of the legal owners, physically attack people trying to get food inside, and destroy and steal the property of the Embassy Protection Collective (food, placards, signs, canopy). In violation of the city’s noise ordinance, the mob has been blasting sirens all day long at decibels so high that even the Secret Service police have been wearing earplugs. They block the sidewalks and all public passages. They have set up 10 canopies and 3 tents to surround the entire building. When we tried to set up a canopy, we were attacked by Guaidó supporters, but it was our member, Tighe Barry, who was arrested and accused of pushing a Secret Service officer.

The Secret Service has a public statement saying that no individuals, medicine or food have been prevented from entering the building. We ask anyone who believes this to go to the embassy and try to deliver a package to the people inside. Even packages sent by the U.S. Postal Service are not allowed in. Every entrance is blocked by opponents, and the Secret Service does nothing to stop them. On the contrary, supporters who have tried to bring food have been arrested. This was the case of CODEPINK organizer Ariel Gold. When she found all entrances blocked, she threw bread into an empty ramp outside a door and was arrested for “throwing missiles.” When we tied a package to a rope to send food up through a window, three of us were physically assaulted, and despite clear video evidence, the police refused to arrest our attacker.

Our people inside are without sufficient food and other critical supplies. They are not allowed to freely exit and enter the building. They sleep at night with a terrible sense of insecurity, worried that the angry mob will break in and attack. But we remain resolute, those of us on the inside and those of us supporting them on the outside, and we demand that our government respect U.S. and international law. The Secret Service must protect the embassy and the people who are lawfully on embassy property until the two governments come to an agreement about their premises. At that time, the Embassy Protection Collective will happily dissolve and leave the embassy, happy because we can go back to our lives but happy, most of all, because we will have helped to give John Bolton and Elliott Abrams one less reason to drag our nation into another war.

Medea Benjamin is the co-director of CODEPINK and a member of the Embassy Protection Collective.