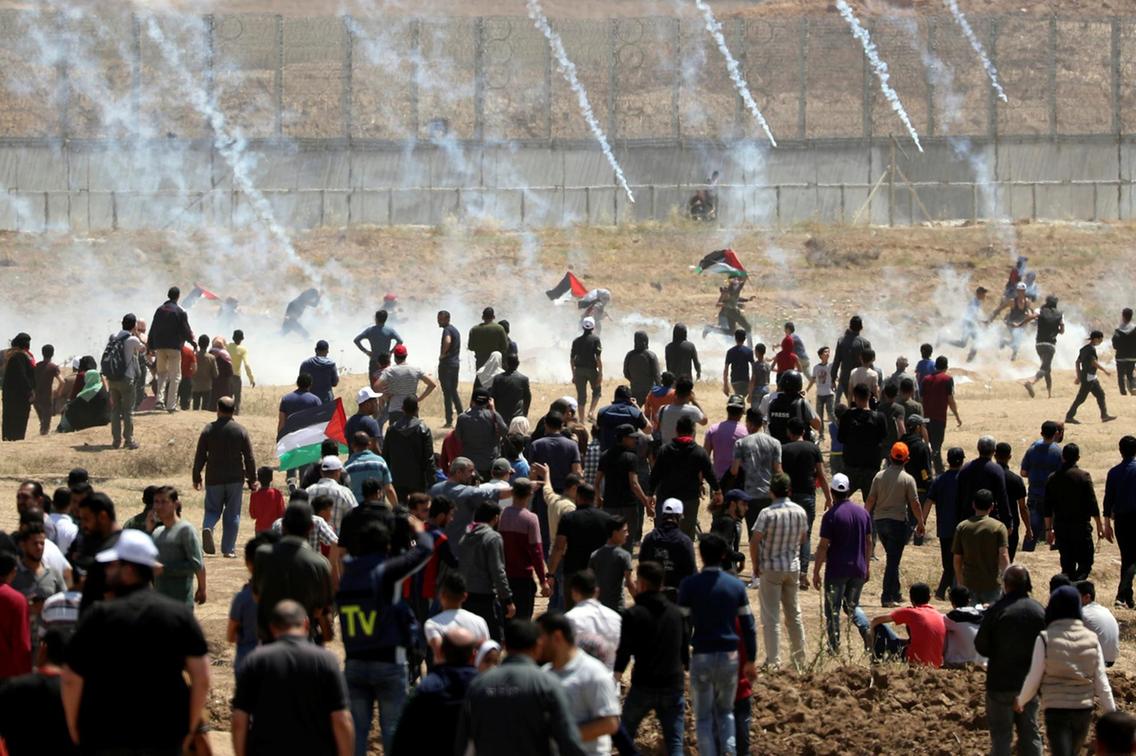 As many as 65 protesters were injured by Israeli forces on May 15 on at the fence dividing Israel and Gaza, as Palestinians across the world marked the 71st anniversary of the Nakba or the catastrophe. The day honors the more than 800,000 Palestinians from over 1,300 Palestinian villages and towns who were forced to flee or were expelled from their homes and villages by Zionist militias during the establishment of the state of Israel and the 1948 Arab-Israeli war.

In 1948, the Zionist forces seized control of more than 78% of the historical Palestine, and ethnically cleansed and destroyed 530 villages and towns. Thousands of Palestinians were also killed. Mass expulsion and displacement of Palestinians had already begun in 1947 following the passing of the UN partition plan to divide Palestine into a Jewish and an Arab state. In less than six months, from December 1947 to mid-May 1948, Zionist militias expelled 440,000 Palestinians from 220 villages.

The Nakba ended up forcing out somewhere around 85-90% of the Palestinian population to make way for the state of Israel. The Nakba also didn’t stop in 1948 but continued for the next two years, with the expulsion of Palestinians from al-Majdal (later renamed Ashkelon by the state of Israel) going on as late as 1950.

Several Palestinian organisations have released statements in commemoration of the Nakba. The Democratic Front for the Liberation of Palestine (DFLP) called for converting the 71st anniversary of Nakba day into a total and outright “rejection of the Oslo accords and its obligations, limitations, and entitlements,” urging the official leadership to formulate an exit strategy from the Oslo accords and all its related projects. The statement also called for a complete rejection of US president Donald Trump’s ‘deal of the century.’ It called on the official Palestinian leadership to implement decisions taken by the central council and the national council, such as to redefine its relationship with the occupying power and to transfer the national cause and rights to the United Nations and the International Criminal Court.

The Palestinian youth organization, Voice of Palestinian Students, also released a statement marking Nakba day, reaffirming the “ vital role of student movements and their historic responsibility in combating oppression and colonialism wherever it exists. The group, in addition to condemning Trump’s ‘deal of the century’, called out Arab countries that are trying to normalize relations with the ‘Zionist entity’ Israel, and are being strong armed by the US into accepting the deal as a just and fair solution to the Palestinian cause. The statement also went on to denounce Trump’s shifting of the US embassy to Jerusalem and his recognition of the Israeli occupation of the Golan heights.

Praising the ongoing Great March of Return protests in Gaza, the group strongly emphasized the Palestinian people’s strong will and conviction to not let their legitimate right of return being taken away.

Last year, on May 15, the day when the US embassy was shifted to Jerusalem, Israeli forces killed nearly 60 Palestinians and injured around 1,200. This year’s Nakba assumes greater significance as Donald Trump may announce his ‘Deal of the Century.’ This deal is likely to be a further blow to Palestinian aspirations and will see strong resistance from Palestinians.