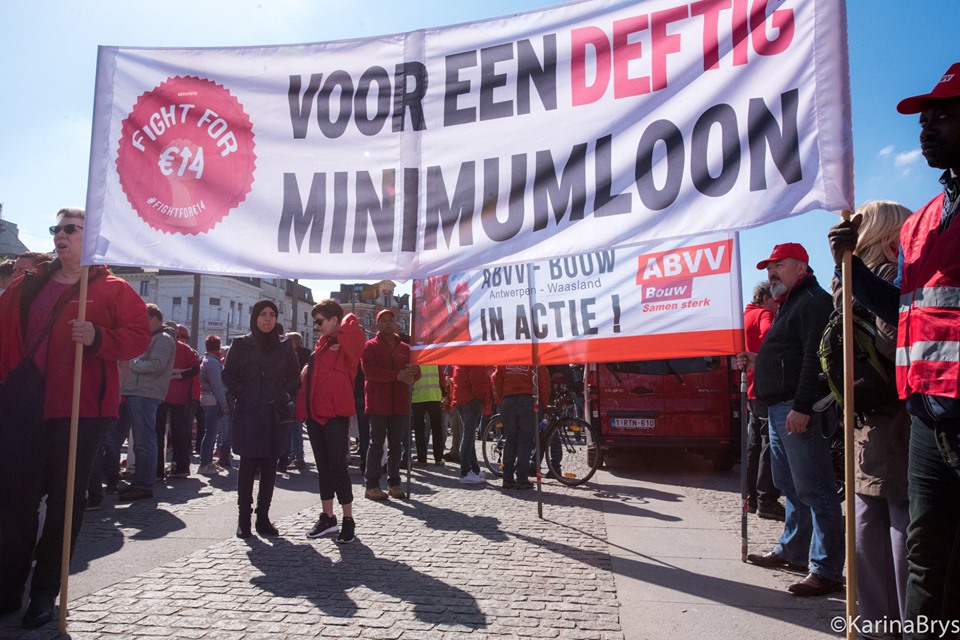 Belgian workers are demanding a minimum wage of 2,300 euros a month.

Workers in Belgium hit the streets on May 14, demanding a minimum wage of 14 euros per hour, 2,300 euros per month and a net pension of 1,500 euros. Demonstrations were held in Brussels, Antwerp, Ghent, Zele, Ninove, Hasselt, Tienen, Wavre and Liege. The mobilization was called by the socialist national trade union, General Federation of Belgian Labor (ABVV/FGTB).

The union demanded raising of the minimum benefits to 10% above the poverty line, a fairer model of wealth redistribution through tax reform, the guarantee of mechanisms to ensure a fair wage evolution (index and scales), a revision of the 1996 wage law for proper wages, as well as a proper refinancing of public services and social security.

The union said that their “struggle continues for more purchasing power and against strict wage norm that scatters any significant wage increase. The minimum wages must be raised in a serious way. Far too many people fail to make ends meet.”

The Workers Party of Belgium (PTB) expressed solidarity with the protesters and the trade union.

According to official reports of the Organization for Economic Co-operation and Development, the International Labor Organization, and the European Commission, the current term of the liberal government, headed by Charles Michel, has seen a significant loss of purchasing power for employees. Belgian employees are among the few in Europe whose real wages have fallen. As of January 2019, the minimum wage in Belgium is 1,593.81 euros (USD 1,781) per month.