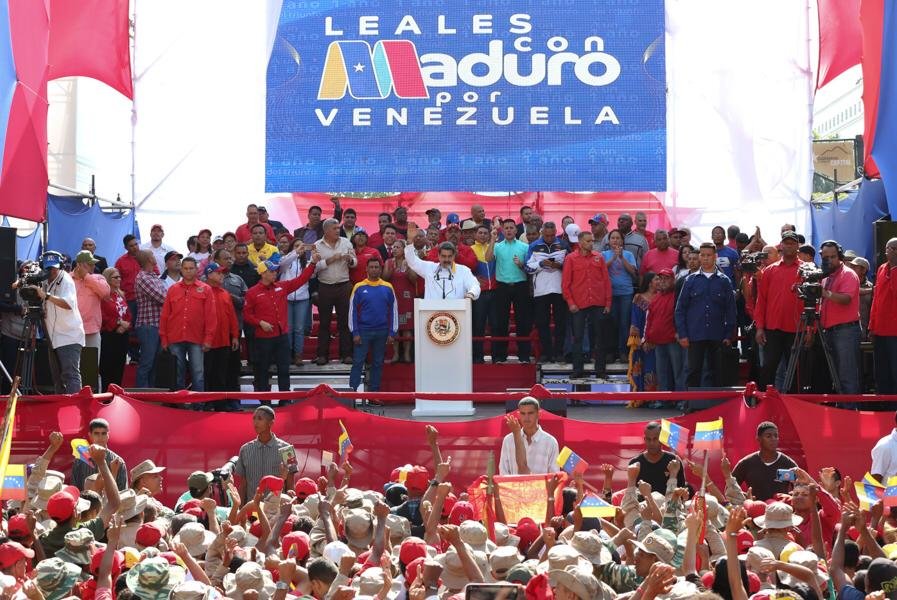 Nicolás Maduro addresses the crowds on May 20, 2019 a year after his re-election. Photo: Twitter

On May 20, under the banner of “Victory march”, hundreds of thousands of students, women, men, members of social and people’s movements and organizations mobilized across Venezuela to celebrate the first anniversary of the re-election of President Nicolás Maduro. They also ratified their support for the Bolivarian Revolution, their commitment to defend democracy and national sovereignty, and reject US interference.

In Caracas, the supporters of Chavismo, wearing red t-shirts and with the flags of the United Socialist Party of Venezuela (PSUV), marched from Plaza Morelos to the presidential palace Miraflores, passing through the headquarters of the Constituent National Assembly (ANC).

At the Miraflores palace, they were addressed by President Maduro, who thanked them for their constant support for his government enduring intensified imperial aggression and blockades during past one year. He reiterated his commitment to continue working in defense of political stability, social protection and economic growth.

“I thank the Venezuelan people for the resistance, loyalty and determined support for my government during this year, in which we faced severe imperial tests, aggression and blockades. With loyalty, patriotism and continuous effort, we will move forward from victory to victory,” he wrote in a tweet after the demonstration.

Maduro also expressed his willingness to establish a dialogue with the opposition, referring to the mediation initiated by the government of Norway. “Yes to peace, yes to dialogue, yes to development,” he said. He also suggested holding the National Assembly (AN) elections, which has been in contempt since 2016. “Let’s have the National Assembly elections and see who has the people, who has the votes. We accept the challenge, let’s seek a peaceful, democratic and electoral solution,” he said.

“I invite the oppositions of Venezuela to legitimize the Legislative Power. We accept the challenge of having an early election of the National Assembly so that, with votes, we can prove who has the support of the people. This is the way, peace and democracy,” he tweeted later.

On May 20, 2018, presidential elections were in Venezuela and Nicolás Maduro was re-elected with 68% of votes. Though there was a large participation by sectors of the opposition, the far-right sectors led by figures like Guaidó and López called for a boycott of the elections. Their call was bolstered by declarations from the US and its European and Latin American allies that they would not recognize the election results. After the overwhelming victory by chavismo, the US and its lackeys stated that they did not recognize the results and would not recognize the next term of Nicolás Maduro.

Since the beginning of Maduro’s second term on January 10, imperialist forces, in coordination with Venezuela’s local oligarchy, have intensified their multi-layered attacks on the sovereign, democratic government of Nicolás Maduro and the infrastructure of Venezuela in an attempt to destabilize the country and overthrow Maduro. Puppet leader, Juan Guaidó of Venezuela’s National Assembly declared himself “interim president” on January 23 and has been the centerpiece of the pressurizing mechanisms to push regime change.

The latest was on April 30, when Guaidó along with far right-wing leader Leopoldo López attempted to instigate an uprising among the Armed Forces in Venezuela. They called on members of the National Bolivarian Armed Forces to mobilize at the La Carlota airbase to overthrow Maduro’s constitutional government. Their attempt failed and saw small, isolated violent protests on the highway near the air base while thousands of Venezuelans showed up in large numbers outside the Miraflores palace to show their continued support and loyalty to the constitutional president.