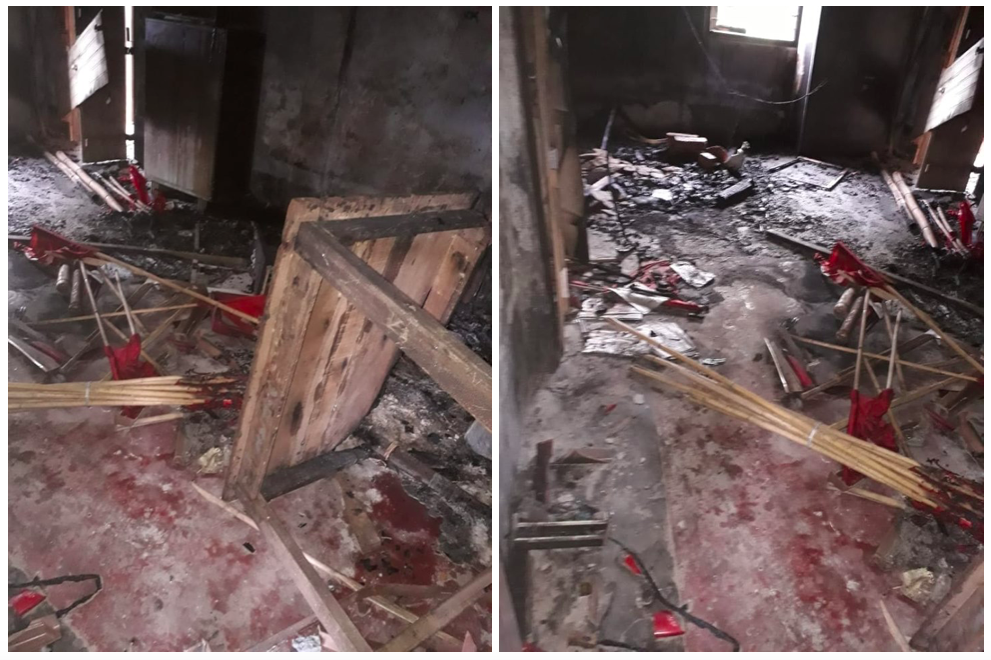 A Communist Party of India (Marxist) office vandalised by workers of the Bhartiya Janata Party (BJP).

India is witnessing a series of incidents of violence after the declaration of the general election results on May 23. The incumbent far-right Bharatiya Janata Party (BJP), led by Narendra Modi, came back to power, winning 303 out of the 542 seats that were contested. The National Democratic Alliance (NDA), which is led by BJP, won 352 seats and will continue to dominate parliamentary decision making this term as well.

A widespread fear among the minorities and marginalized communities of the country has been that a second term for the Hindu fundamentalist BJP will lead to an even further increase in incidents of hate crimes and mob lynchings, which were frequent during its first term. Most of the victims of these crimes were Muslims and members of the oppressed castes. Hardly any action was taken against the perpetrators of such incidents in the last five years. The fears that these incidents will continue came true with multiple attacks against Muslims and Dalits (the oppressed community which is considered untouchable within the Hindu caste system) beginning ahead of the announcements of election results and continuing after.

In the BJP bastion of Gujarat, a north-western State, the house of a Dalit couple was attacked by a mob of 200-300 people. This was after the Dalit man, Pravin Mackwana, allegedly posted an update on Facebook, saying that the government was not permitting Dalits to get married at the local temple. While the police registered a complaint against 11 people and an unidentified mob after Pravin’s wife reported this incident, a complaint was also filed against Pravin for allegedly “promoting enmity between different groups”.

Attacks by self-proclaimed cow vigilantes have also begun again. In the central Indian State of Madhya Pradesh, cow vigilantes thrashed three Muslims, including a woman, with sticks on the suspicion of carrying beef. The victims said they were forced to shout “Jai Shree Ram!” (“Victory to Ram!,” a Hindu mythological god.) Certain sections of the Hindu community believe that the cow is sacred. Ever since the BJP took power in 2014, there has been a drastic rise in the number of attacks by vigilante groups on those they believe are carrying or storing beef.

One of the most disturbing incidents took place on May 26 when a Muslim youth was shot at after he revealed his religious identity. The incident took place in Begusarai, Bihar, where the battle between BJP leader Giriraj Singh and the Communist Party of India candidate Kanhaiya Kumar was fought on deep religious and ideological lines.

The victim, Mohammad Qasim, said that no one came to his aid after he was shot. “I was stopped by Rajiv Yadav and he asked me my name…when I told him my name, he fired at me and said you should go to Pakistan,” he said in a video that has gone viral.

Political violence is continuing unabated as well. The Communist Party of India (Marxist) (CPI(M)) reported that their cadre has been facing unceasing attacks from members of the BJP, especially in the State of Tripura. Dozens of CPI(M) offices have been ransacked and taken over by right-wing forces in the State.

In the State of West Bengal as well, several houses of CPI(M) supporters have been attacked and ransacked, allegedly by members of the Trinamool Congress (TMC), a regional party which is currently ruling the State. Several clashes have also been reported between members of the BJP and TMC in West Bengal.

BJP’s election campaign, much like its first term in power, was carried out on the planks of majoritarianism and religious polarization. BJP leaders, in their campaign speeches, regularly invoked direct and indirect threats against the minority communities of India, particularly Muslims. One of the elected members of parliament, Pragya Thakur, is a key accused in the Malegaon bombings case of 2008 which took the lives of 6 people and injured over a 100. The bombings were targeted at the Muslim community of the religiously divided town. Thakur was fielded by BJP from the Bhopal constituency of Madhya Pradesh just a few days before polling was to take place.

With the continuation of such incidents, and a terror-accused as a member of parliament, prime minister Narendra Modi’s call to build a “strong and inclusive India” will be hard to believe for many.