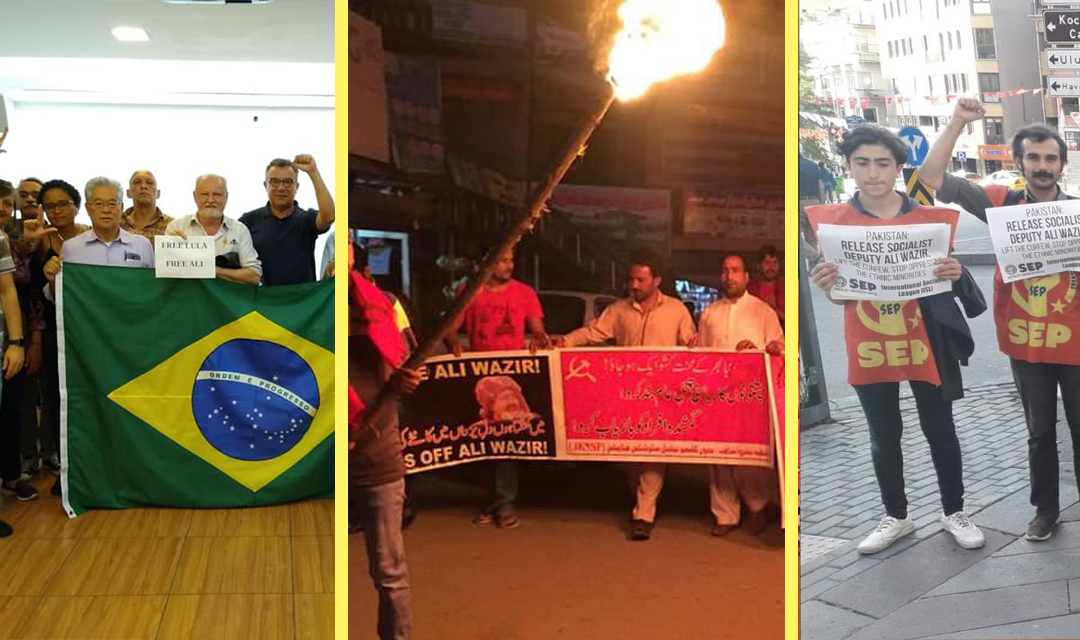 Protests and mobilizations were held in Pakistan and across the world demanding the release of Ali Wazir, the leader of Pashtun Tahafuz (Defense) Movement (PTM) and a member of Pakistan’s National Assembly from North Waziristan. On May 26, the Pakistani army opened fire at a PTM-led mobilization against the brutal army operations that are frequent in areas inhabited by the Pashtun community. Three activists were killed in the firing, which happened in in Baya in the North Waziristan region. Wazir, who was one of the leaders of the protest, was arrested immediately after. Another leader, Mohsin Dawar, who is also a member of National Assembly, was taken into custody. The duo and seven others are currently being held by the anti-terrorism police.

Protests for the release of Wazir and Dawar were held in Rawalakot and Khaigala (on the Pakistan side of Kashmir) and Balochistan and Khyber Pakhtunkhwa. Solidarity protests were also held in Argentina, the Netherlands, Brazil and Turkey.

The Lahore Left Front, in a statement condemning the killing and arrest of PTM activists, called for the immediate withdrawal of armed forces from the FATA areas and lifting of curfew in the area, and accepting the demands of the PTM movement.  Expressing solidarity with the movement, the left front, comprising the Pakistan Mazdoor Kissan Party, Awami Workers Party and others demanded the release of all PTM activists.

Wazir and Dawar are prominent leaders of the PTM and were elected to the National Assembly in July 2018. Wazir’s family has been repeatedly targeted by the Taliban, leading to the death of 13 of his relatives, including his father and and siblings.

Pakistan’s army, in its statements, defended its actions by alleging that the protesters had fired on the security forces first. However, the protesters said that they were unarmed, and that the presence of an army checkpost on the way to the protest site meant that people could not carry arms.

Internet services in the area were suspended and journalists were barred from covering the protest, which prevented information from coming out.

Military operations are common in the Waziristan region, which borders Afghanistan, because of the significant Taliban presence. However, it is the Pakistani Pashtun civilians who face the bulk of the violence. They are subjected to abductions, extrajudicial killings, displacement from their homes and their villages are often besieged in cordon and search operations.

It is in this context that the Pashtun Tahafuz Movement emerged to fight for Pashtun rights. One of the key issues the movement has pursued from the very beginning is the presence of a large number of landmines in the Pashtun tribal areas. The regular demonstrations demanding their removal have forced the army to begin the process of removing them although many remain.

The PTM has also been protesting the extrajudicial killings of Pashtun people and demanding arrests and inquiries against those responsible. The movement has called for the government to constitute a truth and reconciliation mission to look into these cases in order to ensure justice, as well as building better relations with the Pashtun people.

However, the coverage of the movement by the mainstream Pakistani media has been scant. The movement and its causes, as well as the issues faced by the Pashtuns, have not found any space in mainstream media narratives. In an attempt to sideline the demands of the PTM movement, the political and military establishment often term it as India or Afghanistan-backed.

While these demands have received immense support from both the Pashtuns and parts of the general Pakistani population, they have been largely ignored by the government and army, which have called them unconstitutional and anti-Pakistan. The PTM has been able to mobilize large numbers of people to rally in different parts of Pakistan, including a long march to the capital Islamabad last year. Some of the larger gatherings have seen as many as 50,000 people taking part .