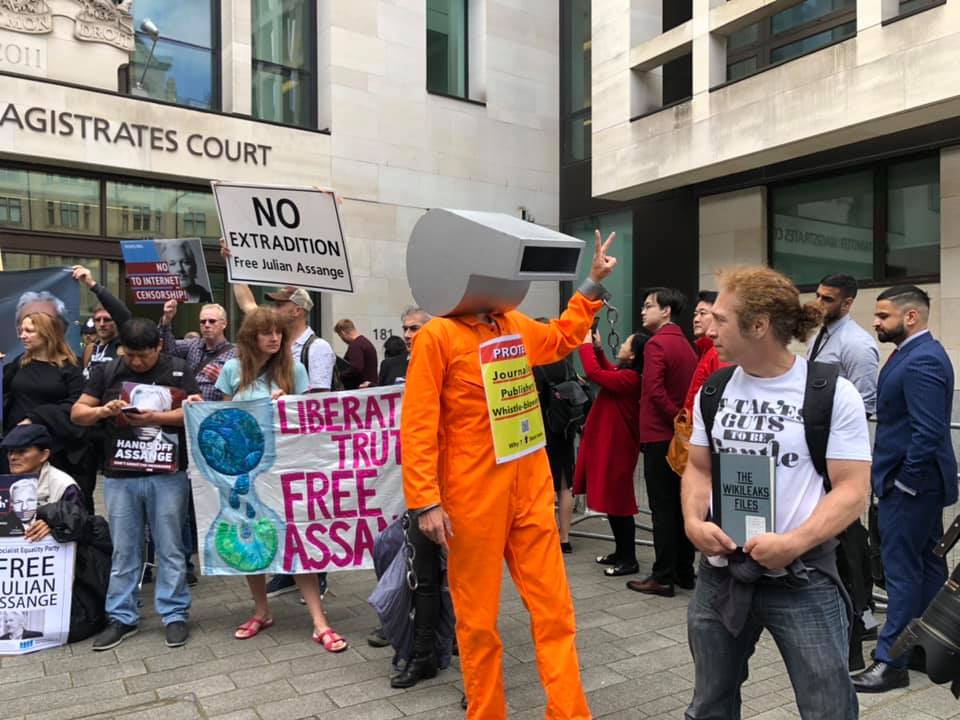 Protesters outside the Westminster Magistrates’ Court, where Assange’s extradition case is under trial, on May 30

A United Nations’ human rights investigator has stated that the Wikileaks founder, Julian Assange has been exposed to “psychological torture”. UN special rapporteur on torture, Nils Melzer said in a statement that “Mr. Assange has been deliberately exposed, for a period of several years, to progressively severe forms of cruel, inhuman or degrading treatment or punishment, the cumulative effects of which can only be described as psychological torture.”

Melzer’s statement, which came barely a day after Assange missed his first court session in an ongoing extradition case due to poor health, has only added to the growing public concern for his health. Melzer visited Assange on May 9, after he was sentenced to 50 weeks in prison for jumping bail. Melzer stated that two medical professionals who specialize in examining potential victims of torture conducted a thorough medical assessment.

“It was obvious that Mr. Assange’s health has been seriously affected by the extremely hostile and arbitrary environment he has been exposed to for many years… In addition to physical ailments, Mr. Assange showed all symptoms typical for prolonged exposure to psychological torture, including extreme stress, chronic anxiety and intense psychological trauma,” Melzer explained in his statement.

The UN investigator also cautioned that an extradition to the United States will very likely lead to “serious violations of his human rights, including his freedom of expression, his right to a fair trial and the prohibition of torture and other cruel, inhuman or degrading treatment or punishment.” This was a reiteration of the stand taken by previous UN special rapporteurs and special investigators who have taken a look at Assange’s case over the years.

Assange was due for a hearing session yesterday on May 30, when his lawyers submitted to the court that he is too ill to appear for the hearing both in person and over a video conference.

This was set to be the first hearing since prosecutors in the United States started pressing for his extradition for a federal investigation relating to his publication of thousands of secret government cables. Before the hearing Assange’s lawyers, colleagues and friends raised concerns over his fast deteriorating health while in jail. In a statement released hours before the court session began, Wikileaks said that it has “grave concerns about the state of health of our publisher, Julian Assange, who has been moved to the health ward of Belmarsh prison.”

Assange has been in the Belmarsh prison in London since May 1 when he was sentenced to 50 weeks imprisonment for violating his 2012 bail. Within the span of a month of his internment in the high-security prison, Wikileaks stated the Assange has “dramatically lost weight”. Assange’s defense lawyer, Per Samuelson, also said that his condition has become so critical that “it was not possible to conduct a normal conversation with him.”

Speaking to RT, Wikileaks ambassador Joseph Farrell pointed out that the very fact that he was moved to the medical wing of the prison by the authorities indicate how dire the situation is. “The fact that they did this, that they put him on the ward (sic), speaks plenty in itself”, said Farrell while at a protest in support of Assange, outside the Belmarsh prison.

The Wikileaks statement also added that the deterioration of Assange’s health is due to the conditions inside the prison “that were incompatible with basic human rights”. The statement also condemned the Swedish court, that reopened the sexual harassment case against him, for refusing to postpone a hearing that is scheduled on June 3. Assange is also currently facing an ongoing indictment and investigation in the United States on 18 charges, which together carry a maximum prison sentence of 175 years.

In light of the news of his deteriorating health, which has been altogether ignored by the mainstream media, support has come pouring in.

Kristinn Harfnsson, the editor-in-chief of Wikileaks, said that “Julian’s case is of major historic significance. It will be remembered as the worst attack on press freedom in our lifetime.”

Former deputy director of American Civil Liberties Union and director of Knight First Amendment Institute at Columbia University, Jameel Jaffer told the Intercept “The best way to understand the indictment is it’s not about Assange. It’s about the American media. It’s about sending a message to investigative journalists.”

Meanwhile, long-time supporter of Assange and friend, Pamela Anderson has been trying to whip up support for Assange among her colleagues in the entertainment industry. Talking to the media while attending the Cannes Film Festival, she said “He needs public support, and people in Hollywood have a voice. Everyone is a little bit brainwashed because of the election, and they blame it on him or whatever they want to do.” Anderson visited the Belmarsh prison to meet Assange after he was sentenced earlier this month, and had denounced the conditions of isolation which he is subjected to. Her denouncement was echoed by Harfnsson who revealed that Assange was made to spend nearly 23 hours a day in his cell and has very little access to the outside world.