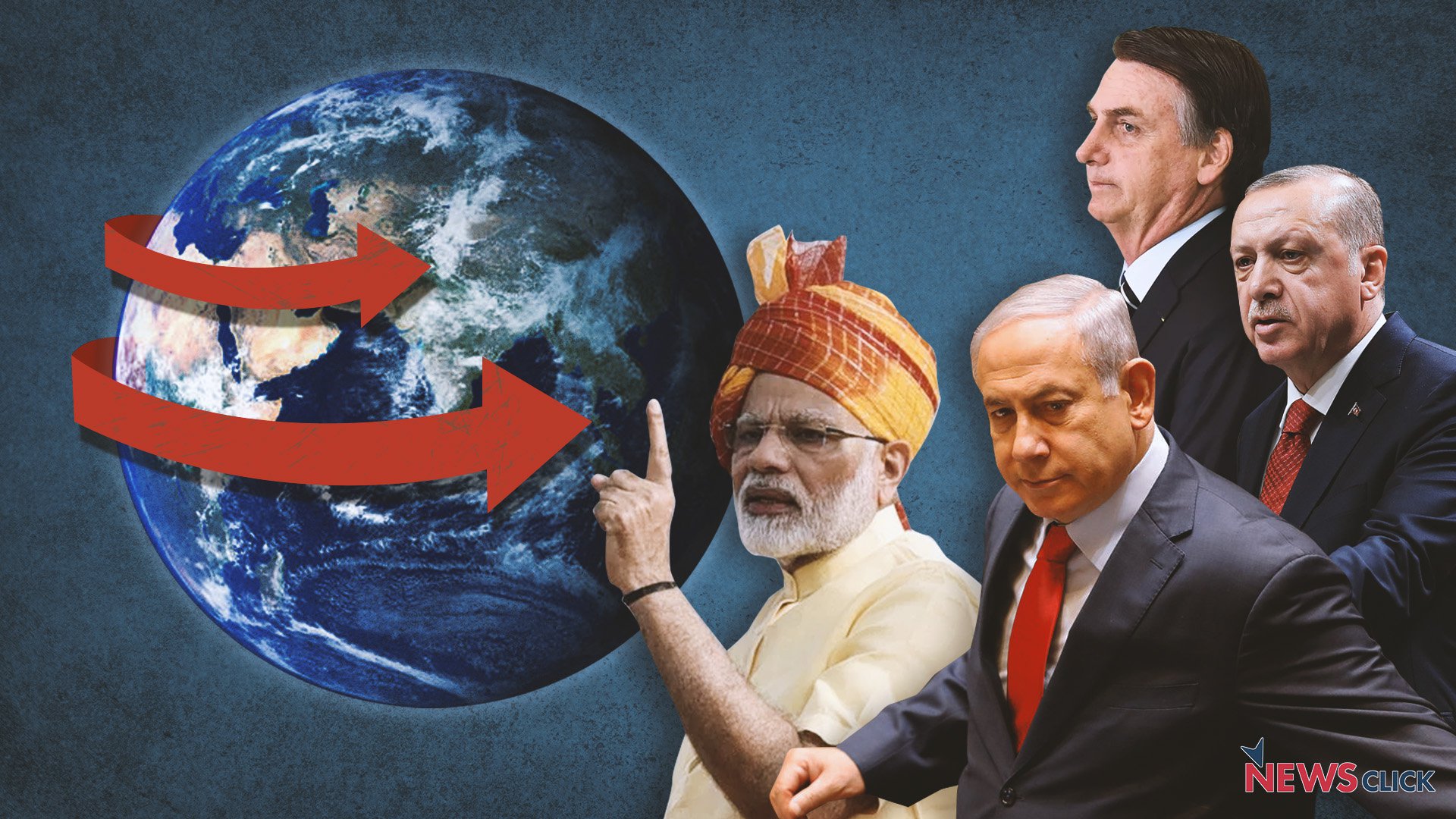 We often miss this aspect in our discussions, but Narendra Modi’s re-election is part of a global right-ward shift that is taking place. Benjamin Netanyahu got re-elected in Israel (but fell short in forming a government, leading to re-election in September). Erdogan got massively re-elected in Turkey. The Conservative government came back to power in Australia against all predictions to the contrary.

In country after country in Latin America, where the left ruled until recently, igniting hopes for a left resurgence elsewhere as well, we now have right-wing governments; the most significant and the most notorious of these is in Brazil, where the new president, Jair Bolsonaro, is on record defending the earlier military regime and even saying that it should have killed some more people! And to cap it all, in last Sunday’s European Union elections, which just followed the counting of votes in India on Thursday, there has been a palpable shift to the right.

It now appears that Marine Le Pen’s far-right party will be the biggest party in France in these elections, nosing ahead of President Emmanuel Macron’s centrist alliance. And Italian deputy prime minister Matteo Salvini’s far-right party will not only be the largest in Italy but could even be the biggest party in the European parliament, just beating Angela Merkel’s party to this position. Merkel’s party lost 9% votes compared with five years ago; and within Germany itself, the far-right party, Alternative for Germany, increased its vote share to 10.5%. In Hungary, Victor Orban’s party is also set to romp home to victory.

While Modi’s victory obviously owes much to domestic developments, we must not forget the global context where there is a massive right-ward shift. When there is such a concerted move to the right, we must ask the question: why is this so? Liberal bourgeois analysts, instead of seeing the commonality between these various parties and movements, tend to take a fragmented picture of reality: they divide European parties into pro-EU and anti-EU, or pro-immigration and anti-immigration; likewise, they see Modi’s victory as an Indian phenomenon, linked to Hindutva [an aggressively nationalistic and racist interpretation of Hinduism which sees Hindus as the original inhabitants of India] but unconnected to what is happening in Europe. Even the strengthening prospect of Donald Trump’s re-election in the US is seen in isolation from these developments. But such liberal fragmentation will not do for Marxist analysis, which seeks out common patterns, and identifies unfolding class configurations. What can we say as Marxists to this right-ward lurch across the world?

It is clearly the manifestation of the economic crisis which has been gripping the world economy since 2008. There have been occasional signs of a mild recovery from it, but no sooner than these signs appear, than the world economy once more gets plunged into a crisis. In fact, the analogy of a ball bouncing along the floor describes the world economy very well: every time the ball bounces up there are cries of a recovery, which disappear when the ball drops back to the floor.

It is in this context of crisis and unemployment that there is a shift to the right all across the world. The liberal bourgeois parties have generally been in denial mode when it comes to the crisis and the consequent unemployment. The right at least recognizes the distress caused by unemployment, though it blames not the system but the immigrants for it, and wants to put curbs on immigration. Since within the EU, there has to be free migration of workers across countries, many on the right are also anti-EU.

In a situation where the liberal bourgeois parties deny the existence of crisis, and the left is slow to put an alternative agenda before the people, the right has seized the initiative and has moved in with its anti-immigration agenda. Its world-wide growth is thus attributable to its taking cognizance of crisis and unemployment, which the pro-establishment political parties have not.

But then where does the Indian case fit into this? Even in India, Modi came to power in 2014 on a “development” agenda. The fact is that the growth rate had come down during UPA-II [the previous United Progressive Alliance government led by the centrist Indian National Congress], so that the promise of neoliberalism improving everyone’s lot was beginning to fade. When in power, the Modi government did literally nothing to redeem its promise of “development”, which is why in the just-concluded elections it did not utter a word on the subject. But it changed the discourse to “fighting terrorism”, “ensuring the nation’s security”, “teaching Pakistan a lesson”, and “instituting Hindutva”, which conveniently by-passed awkward questions like what it had done to bring about “development” during its years of power, and yet served it well.

The point remains, however, that the shift from a neoliberal party like the Congress, to a right-wing party like the BJP, became possible because of the crisis of neoliberalism. The Congress could no longer pretend that neoliberalism would bring about “development”. The BJP did not talk about “development” at all after an initial period, but changed the discourse completely, much to the satisfaction of the corporate-financial oligarchy (so much so that the sensex rose sharply when the exit polls predicted a BJP victory).

This change in discourse, however, will have only a transitory effect. Neither the Congress nor the Bharatiya Janata Party have any clues about how to overcome the crisis of neoliberalism and provide employment to the millions of unemployed. In fact, a section of the Congress can see the difficulty of going along the old neoliberal track, which is why in its election manifesto there was talk of NYAY [an income scheme for the poor], a scheme of transfers to the bottom quintile of the population. But this scheme, which, in the normal course would have generated much enthusiasm, and could even have been a game-changer for the Congress, proved to be a damp squib, because no credible estimates of how the money was going to be raised were provided. The people instinctively felt that this was just an election promise which would be broken on the morning after the elections.

But just as the centrist, liberal-bourgeois, Congress party has no idea how to take the economy forward, the BJP is equally clueless. Its brand of “nationalism” will soon wear thin. You cannot keep people hooked to a daily dose of anti-Pakistan and anti-Muslim rhetoric, when they are unemployed and hungry. Besides, the economic situation does not remain at a standstill. Even if the Modi government does nothing in the realm of the economy, the economy will not leave Modi alone. The crisis will get aggravated, with recession and balance of payments difficulties becoming more acute over time. And when that happens, the Modi government will have no answers for it (though, of course, by then rescuing the economy would have become that much more difficult).

With neither of the neoliberal formations being able to provide an answer to the burning material problems of the people, it is only the left, which can go beyond neoliberal capitalism, that can provide a way out of the crisis, though this way out would take us eventually beyond capitalism itself. This is true not only in India but in the rest of the world as well.

We are, in short, looking at a historical conjuncture where, no matter how successful the right may be in the short-run in mobilizing the people around a false or divisive agenda, it is basically incapable of leading them out of their current state of unemployment and desperation.

There are moments in the history of a nation when the existing system appears stable and capable of a long life; but all this changes quickly and new moments appear when the system simply cannot go on as before. For capitalism, now is such a moment, not just in India but all over the world. No matter how successful the right may be electorally here and elsewhere, it cannot alter this basic fact.