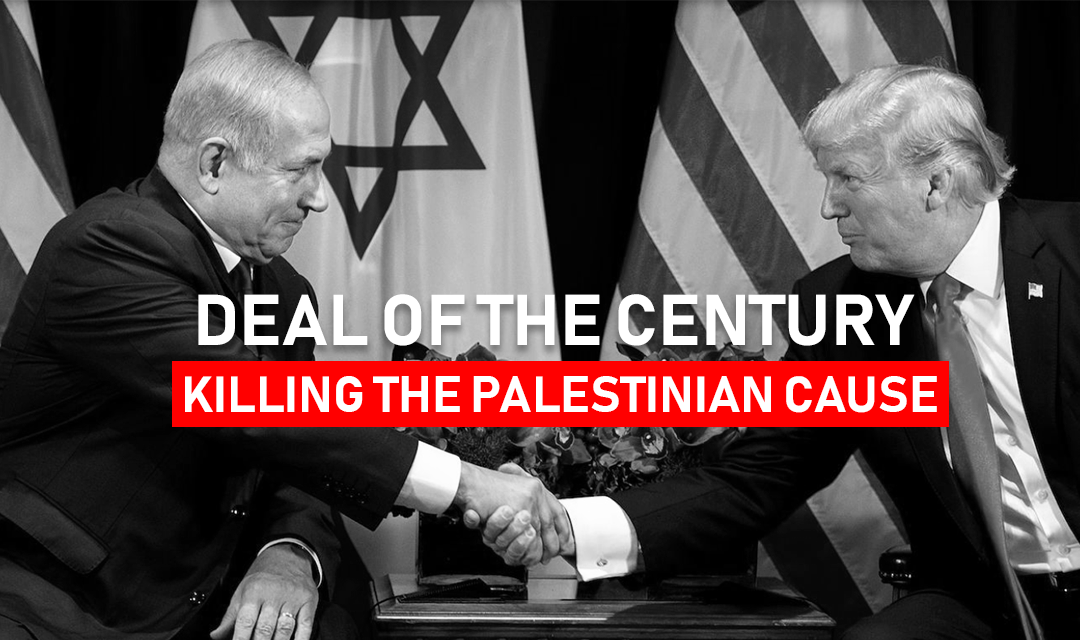 Donald Trump and his advisor Jared Kushner, along with leaders from Israel, Saudi Arabia, United Arab Emirates and other Arab countries, are preparing to unveil the ‘deal of century’ at the Bahrain Economic Summit scheduled for June 25.

According to Trump, the deal will provide a “solution” for what it refers to as ‘the Israel-Palestine conflict.’ Information that has been leaked about the deal indicates that it seeks to kill the Palestinian struggle for self determination and strengthen the Israeli occupation of Palestine.  Palestinian people, movements and political parties across the spectrum have rejected the ‘deal of the century’.

Palestine based Nabd Youth Forum takes a look into this deal, its ramifications on the everyday lives of Palestinians and what it means for the future of the Palestinian cause.

(This article is published in joint collaboration with the magazine Palestine Pulse. Translations by Waed Abbas)

What we know about the deal of the century:

When we talk about the “deal of the century,” there are several overlapping lines and intertwined issues at play. Our discussion of this deal is mainly related to the termination of the Palestinian cause through a set of points referred to as terms in this deal. On top of the list of terms is the one where Trump declared that moving the US Embassy to Jerusalem as a straightforward step to end the discussion on the Jerusalem topic; declaring it as the capital of the Zionist entity.

This step was followed by declaring the occupied Golan Heights an Israeli territory under Israeli sovereignty. This was accompanied by the declaration of the racist Nation-State Law in Israel (occupied Palestine in 1948), which, according to the Israeli political system, would legitimize the Jewish identity of the Zionist state and its nationality as an Israeli one. This law mainly targets the Palestinian Arab presence in Israel. In addition to the previously mentioned, we also have the restrictive measures forced on the United Nations Relief and Works Agency (UNRWA).

Despite postponing the official announcement of the terms of the deal, the general positions in the Arab region have become clear, especially after the recurrent visits of Kushner, senior adviser to the President of the United States, to the region. Talk of the deal was accompanied by an increase in openly and publicly normalizing the relations with the Zionist entity. In some cases, this has reached the extent of some Arab countries approving the terms of the deal, and even adding pressure to implement it.

In this regard, on the Jordanian side there are three basic issues that are demanded by the American and Zionist administrations: the issue of land exchange, the resettlement of refugees in refugee camps, and the establishment of a confederation that brings together Jordan, the Palestinian Authority (PA) and the Israeli Civil Administration, where this also entails the annexation of Jerusalem and the West Bank. As for the demands of the Egyptian government, there is a discussion of the idea of resettlement localization of refugees.

When it comes to Lebanon, the Trump Administration sees it as part of the deal through the resettlement of refugees which in turn completely eliminates the Right of Return for Palestinian refugees. For Syria, the deal is about providing facilities and solutions for refugees, the Kurdish issue, and the Idlib case; in exchange for breaking the alliance with Hezbollah and Iran. With all the above, the US administration believes that it will be sponsored by the Gulf through the financing of industrial projects, or the promise of providing funds to fill the financial deficit in these countries. In this context they started the launch of the “Economic Peace” summit in Bahrain, with support from Saudi Arabia and UAE, and with complete rejection from all Palestinian parties and the PA in the West Bank.

The deal also coincides with the tightening of the siege on the Gaza Strip; that serves as one of the many attempts to bring down the resistance project there and tighten the financial grip on the PA in the West Bank through reducing the US and Gulf financial support. On a regional level, there is constant hinting of striking Iran militarily or lifting the sanctions of Iran in exchange for stopping its support to Lebanese and Iraqi resistance groups, and to the ones in Gaza as well. Another term for lifting the sanctions includes cutting off the Chinese Silk Route that goes through Iranian territories and ports; in an attempt to impede China’s transformation into an economic world power, and guarantee the international economic hegemony of the US.

What “alliance” in the face of the deal of the century are we looking for?

According to what has been leaked in the media about the deal, the terms and items mentioned in the deal will affect Palestine, the Arab world, and the region altogether; which objectively links the issue of Palestine with other issues and powers regionally and in the Arab world. The Palestinian position here determines whether this substantive link can be transformed into a structural one.

And from here emerges the following question, what kind of unity do we want, what alliance are we looking for, and on whose soil?

Most of the discussions revolving around handling the deal of the century are based on the need to unify the Palestinian ranks as a prerequisite for the ability to face this deal. However, this deal can not be separated from its historical context. The series of normalization acts and the transformation of the Zionist enemy into a friend that began since Camp David, Wadi Araba and the Oslo agreements have dismantled the Palestinian people and penetrated their political and social structures. We cannot guarantee that there will be no new ruptures in such a manner through the Gulf funds and the various political accounts. However, what we can count on in the local level now, is the power of the people that must be followed by the presence of a political power and movement on the ground. These tools must guide the existing experiences and expertise that have been accumulated over the years. They also must push the existing state of rejection to status quo, in the absence of a political solution or withdrawal from the 1967 occupied territories. And let us not forget that on a community level, we have to deal with the deteriorating situation of high rates of employment and poverty.

Hence from here the option of confronting this deal serves as the only variable to change the power balance within the Palestinian community in terms of political decision making. Whoever is successful in showing the true face of the struggle; the true essence of it, will not agree to stand on the side of the bargaining party. On the contrary, they will stand on the side of those who object and resist: a center that defends itself, in the midst of a real conflict targeted within the territory. A greater force in the conflict means that we are not alone.

In relation to the previously mentioned, we have been recently witnessing the American and Western siege, and the series of forced sanctions on Iran in an attempt to suppress and subjugate it. And we cannot overlook such a step in our attempt to analyze what is referred to as “the deal of the century.” We cannot deny the fact that Iran (as a power) is part of the hub that is refusing to pass this deal. It’s also worth mentioning that Iran has both military power and political influence that can deter any attempted American aggression, in addition to it having the support of Iraq, Syria, Lebanon, Yemen, and other supporters in Palestine.

Deal of the Century: another definition.

In an article by Amer Muhsin published in al Akhbar newspaper, titled “New Year: Ongoing War,” he discusses the notion of the unchanging nature of the American policy towards the “Middle East”; where according to his analysis, the policy never changes, it only acquires new tools of execution. And we quote him stating, “The idea here is that the United States of America does not come at you with one technique, nor does it need to. In case the military option has failed, there are also the options of containment and siege, or the option of economic and diplomatic lobbying, or taking advantage of any internal paradoxes. Imperialism has lots of tools, and it will not refrain from exhausting all of them. These tracks of policy dominance remain synchronized, even if they are issued one at a time. You will find the whole roots of this Trump doctrine; from the idea of power alliances, to relying on mercenaries, to supporting wars from afar and through aviation…” The author points out that history does not act alone, the new policies of America have changed because they have been deterred on the ground, There are always people who can not be bought or subjugated, and are able to resist.”

Additionally, we are currently witnessing an attempt to empty the concept of a national state in “the south”; and that is through the removal of its sovereignty and eliminating its social and economic role, and turning it into a slave or policeman in the capital market world. What the Zionist entity is seeking is to create an objective atmosphere and a new reality to help itself, and not a political party. Accordingly we’ll find attempts to dismantle the Arab reality and to push its internal components into the case of extreme paradoxes, and dismantle its social fabric in an attempt to create a case of chaos, where the struggle will turn into an identity crisis.  And in following the path to liberation and restoration of sovereignty, we have to put faith in the people and their will, their readiness to resist, sacrifice, and stay resilient; or else we will have no chance.

All of this will lead us to the current Palestinian situation, which ominously warns of losing the Palestinian cause. As such we ask ourselves the central question about the crisis of the Palestinian national project, which can only be overcome by a revolutionary tool capable of employing elements of the crisis to free the reality from its predicament.