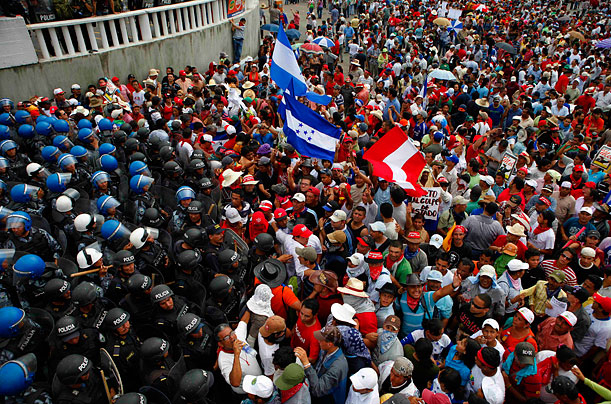 Protests against the coup d'état in Honduras in 2009.

Today marks 10 years since the coup d’état in Honduras that took constitutional president Manuel Zelaya out of office. The coup initiated a process of intense neoliberal reforms and repressive measures to rollback the advancements of the poor and working class. The coup in Honduras was also a test of a strategy that was later refined and replicated in other countries of Latin America like in Paraguay and Brazil to put an end to the progressive cycle in Latin America.

In the first part of this three-part interview on the coup, we speak with Camilo Bermúdez, an international collaborator with the Civic Council of Popular and Indigenous Organizations of Honduras (COPINH) about the motivations behind the coup of June 28, 2009 and the economic, political and social repercussions.

Peoples Dispatch: So ten years out from the coup d’état, what do you think were the principal motivations behind the coup?

Camilo Bermúdez: I think there were several motivations since it occurred in a context with many overlapping elements.

One is that all of the conservative elements wanted to stop the process of change underway in Honduras. The most conservative sectors of the country were scared of this process, and they continue to be.

In the moment of the coup, Manuel Zelaya was close to the end of his term only had a couple of months left. At this time, he was proposing a popular consultation process to vote on a proposal to install a fourth ballot box in the upcoming elections wherein the people of Honduras could decide if they wanted to begin a National Constituent Assembly process to create deep reforms, or at least reforms that the country needed at that moment.

It is important to remember that Manuel Zelaya was a liberal president, from the Liberal Party. He was part of the traditional bipartisan system of the National Party and the Liberal Party, common in many Latin American countries, that had governed Honduras for all of its republican history.

Despite this, he began to break with these bipartisan politics and began to isolate himself from his own party and create a more progressive faction, focusing more of social policies, changes for the population in general. This shift was a trigger to sound the alarms of the national and international right-wing.

The pretext that they used to carry-out the coup was that Manuel Zelaya was going to use this fourth ballot box to call for a referendum to change the constitution to allow for re-election. However, it went beyond the reelection and was the policies and the process of reform that instigated the right-wing conspiracy against his presidency.

On the international level, in a geopolitical perspective, Honduras has always been very dependent on the regional hegemon which is the United States. However, in this moment in the region Chávez was in power in Venezuela, the Kirchners in Argentina, Nicaragua was led by Ortega, and there were progressive processes in Ecuador, Bolivia, and even Uruguay and Brazil.

So the US began to think of an experiment to put an end to this progressive, pro-integration process in Latin America. From the State Department of the US, a strategy was planned to stop the advancement of these integrationist policies of socialism of the 21st century in Honduras. In this moment the Government of Zelaya was moving closer to the policies and platforms of the progressive Latin American governments. Honduras had joined ALBA (Bolivarian Alliance for Our America), it was part of PetroCaribe, and other platforms of integration that were of course anti-imperialist and were guided by the vision of Hugo Chávez in Venezuela. This was another element that motivated the coup.

Those that promoted the coup are from the traditional oligarchic caste of society, that obviously could not accept the radicalization of the process that was underway, which actually was not even that radical but more of a redistribution of wealth. Either way, they saw that their interests were being affected.

Another very important component is the issue of the participation of the military. Though the coup was supposedly directed by civilian sectors, it was a military coup and the military played an important role. After the dictatorships in the ‘80s in Honduras, the military had continued participating in Honduran politics but on a secondary level. With the coup d’état they saw an opportunity to gain control and have a higher level of participation in the state.

PD: What sectors were hit hardest by the coup?

CB: The hardest hit in Honduras after the coup in 2009 were of course the poor and working class. All of the social policies, welfare policies for the most impoverished in Honduras faced a massive set back. The communities in remote areas that have always been abandoned by the Honduran state were also affected because the coup initiated a period of deepening of the neoliberal model, opening the door to the pillaging of the territories with extractive projects.

In the same year of the coup, during the interim government of Roberto Micheletti, a process of legislative and institutional changes were passed which above all favored private foreign business and facilitated the withdrawal of rights. A series of concession were approved (like the Agua Zarca concession) during this interim period. This also marked the beginning of a series of legislative reforms for the privatization of several services, the impacts of which we can still see today, as the people are in the streets fighting against the privatization of health and education. We also saw the privatization of water, of the forests, through the concessions for extractive projects of mining, hydroelectric, solar energy, extraction of oxygen from the forests, and all of this affected the communities.

With regards to the social reality, if you look at the numbers on a macro level, we can see that criminality greatly increased since the coup. The most evident expressions of violence such as assassinations, homicides, crimes against women, shot up to the point where Honduras became the most dangerous country in the world.

Then the US supported big campaigns and gave an immense amount of funds to the Honduran government for security matters. While the homicide rate has slightly decreased, the structural and institutional violence in the country keeps getting worse. The installation of military bases, repression, attacks against opposition groups, the sophistication of the intelligence mechanisms against the social movements, all of this has been amplified.

There has also been a serious increase of poverty. In Honduras 60% of the population lives in poverty, this means that more than half of the population is poor. Of this 60%, 40% are living in extreme poverty. This alarming reality is a byproduct of the dismantling of the policies of wealth distribution that happened after the coup. This is made clear in the explosion of migration from Honduras. This year and last year we have seen the massive migrant caravans leaving Honduras, but this is a migration that has historically existed and has greatly increased after the coup.

From COPINH, we see how the Indigenous communities have also been enormously affected because of the pillaging of the territories, with concessions on the rivers. The indigenous communities also suffer from state neglect and their most basic needs like water, electricity, food, highways, education and health are ignored. This is a historic reality for Honduran Indigenous communities but was something that had begun to change before the coup.

The process of militarization of society initiated after June 2009 also brings with it racial discrimination and discrimination based on sexual orientation and gender. These things are worsened because militarization stimulates a strengthening of conservative ideology within the society, so we see a sharp increase in the number of hate crimes against these marginalized populations.

Another clear example of all the attacks and loss of rights is the alliance between the Honduran oligarchy with the most retrograde sectors of the Catholic church and in the past several years with the Evangelical churches, with the grouping called Evangelical Confraternity that brings together several Evangelical churches.

With protests and demands from the population, the government has had a completely repressive response. A response of assassinations, of activating death squads that are part of the army but are not only at the service of the military but economic sectors as well. Berta Cáceres was assassinated by one of these such death squads.

PD: What changes were made to Honduran institutions after the coup?

CB: One important change in the institutionality is that the armed forces began to have control and get involved in certain institutions of the state. They began to turn into businessmen and profit from this opening up to business after the coup.

As the military, supported by the US, began to gain greater political and economic power, there is a process of militarization of society. In this moment, the Military Police is created that today is the force behind the repression of the people and the resistance in Honduras.

On the other hand, the institutionality of the justice and legal system were also completely affected during and after the coup. A series of changes within this institutionality were made in order to create a more favorable legal framework to deepen the privatization of the public sector and install the mafia that governs Honduras today through the National Party.

After the coup d’état a series of legislative reforms were passed which directly decreased rights, the Law on the Energy Producing Sector, Water Law, National Security Law, Intelligence Law, Law on Social Security which opened up the possibility for the privatization of health and education. Several laws were also passed on the creation of public-private partnerships which pave the way for the privatization of state enterprises.

In general we see that a legal regulatory framework was created wherein priority is given to the private companies, and the Honduran government creates favorable conditions to promote private foreign investors such as decreasing taxes for transnational companies. Spaces are created like “Honduras Open for Business,” which encourages international private companies to come and invest in Honduras, but in reality the Government was handing these companies parts of Honduran territory to exploit resources.

In the zone of the Caribbean they are going to create the ZEDES, the special zones for economic development. The ZEDES are basically a loss of sovereignty within Honduran territory as they are directed by an administrative board and only depend on them and they do not have to follow any laws as within the rest of the republic.

Stay tuned for part 2 and 3 of this series where we will explore the role of the international community and international financial institutions in the coup, and people’s resistance.