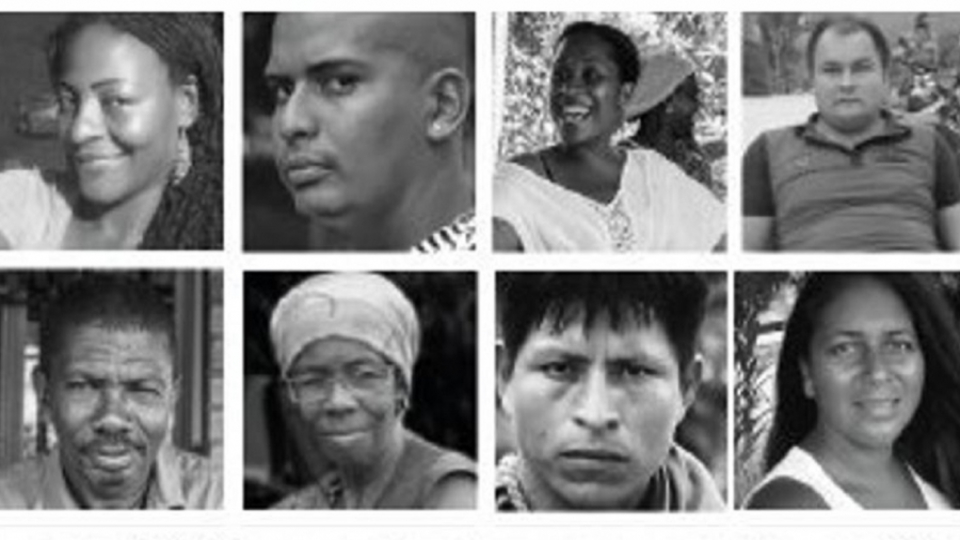 Some of the 800 Colombian social leaders who have been assassinated since 2016.

Today July 26, hundreds of thousands of people are expected to take the streets in over 100 cities across Colombia and in over 30 cities internationally in defense of the lives of social leaders and human rights defenders in Colombia. The day of action called for by the movement “We defend peace,” and seeks to highlight the ongoing genocide against these groups and denounce the indifference and inaction of the Colombian national government.

Colombian human rights organizations estimate that since 2016 more than 800 social leaders, human rights defenders, as well as ex-combatants from the Revolutionary Armed Forces of Colombia (FARC) and their family members, have been assassinated. On top of that, thousands have received death threats and harassment, hundreds have been put in prison on trumped up charges, and dozens have narrowly survived assassination attempts. In the past year, the mass mobilizations carried out by different social sectors and movements have also been heavily repressed by State forces resulting in grave injuries and even several deaths.

Who are the victims?

For the most part the victims of the assassinations are not mass leaders and cadre who organize on a national level. Most are community level organizers, whose organizing directly threatens the economic and political model of control of the local Colombian oligarchy who often have willing paramilitary and criminal groups at their service.

For example, many victims were promoters and participants of programs such as the National Program for Substitution of Illicit Crops. The program was created through the Havana Peace agreements between the FARC and the national government and it seeks to help small farmers transition to a sustainable alternative to growing coca and other illicit crops. However, crop substitution poses a major threat to the livelihood of paramilitary and criminal groups whose central economic activity is in the drug trade.

Other victims were land claimants in the Land Restitution Program, which was created in 2011 through the Victims Law and creates a mechanism to restore land to victims of displacement and violence.

When the FARC demobilized in 2016, the territory that they used to control was left open for dispute between armed groups. Since then, many regions have seen a reorganization of supposed demobilized paramilitary forces and an increase in territorial disputes for control of these lands.

Indigenous and Afro-descendant communities have also been heavily targeted as well as members of Community Action Boards, environmental defenders, urban community organizers and members of human rights organizations. With regards to the ex-combatants of the FARC, the latest estimates indicate that over 127 ex-combatants have been assassinated since the Havana peace agreement was signed in November 2016.

In many assassination cases, the leaders and their organizations had previously denounced the threats that they received from armed groups, yet most often the government authorities do not take the threats seriously or when they do, the protection mechanisms are woefully subpar. Recently in dialogue with EFE, President Ivan Duque, said that it was “difficult” to protect social leaders.

The assassination of 34 year old María del Pilar Hurtado on June 21 in front of her 9 year old son moved Colombian society. On June 1, Hurtado had been singled out along with other community leaders as a military target in a pamphlet circulated by the Gaitanista Self-Defense Forces of Colombia (AGC), a paramilitary group active in the region. While the regional human rights organization alerted authorities to the pamphlet, Colombian authorities alleged that it was fake. Just 20 days later Hurtado was assassinated outside of her house and the human rights defender who spoke out about her murder was forced to flee town due to persistent death threats.

Colombian social movements and organizations have categorized the current situation as a humanitarian crisis and a threat to the right to life and the construction of peace in the country. They have demanded not only that protection measures be improved, but that the government take meaningful steps to get to the root causes behind the systematic killing of those who fight for change in Colombia.

The social movement platform Congreso de los Pueblos released a communique about the mobilizations today. “Not only death follows those who from the rural territories and urban communities dare to confront the authoritarian and elitist regime that only thinks in the increase of capital at the cost of the lives of people and nature. The dignity of the most humble is also threatened with the extermination of the social movements, processes and people’s organizations, with threats and assassination attempts to leaders and through the criminalization of the legitimate right to protest. The stigmatization against human rights and environmental defenders does not stop, nor do the megaprojects that dispossess and displace millions,” reads the statement.