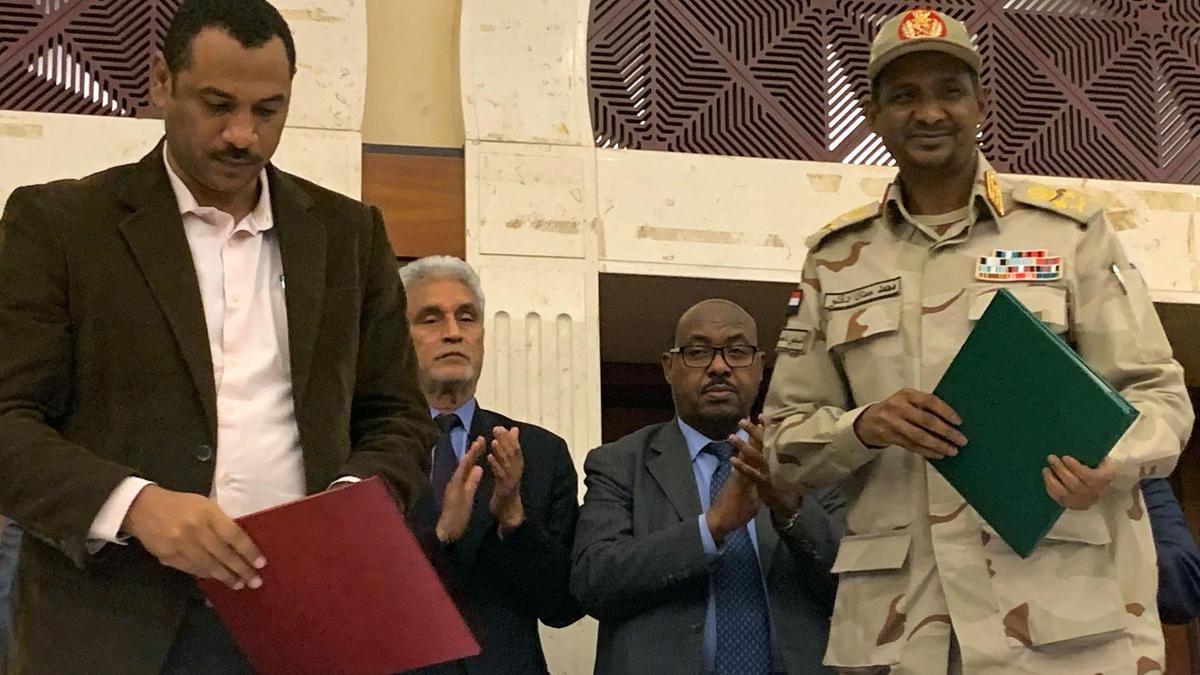 Several sections of the Sudanese protesters are against the agreement that was reached on August 4. Photo: AFP

Yesterday August 4, an agreement on the composition of the transitional government and the power-relations among its different bodies was reached between a section of Sudan’s civilian opposition and the military junta.

This agreement was sealed after the two sides initialed the constitutional declaration yesterday, although the formal signing of the document is scheduled for August 17. A different section of the DFCF, led by the Sudanese Communist Party (SCP) which has played a key role in the revolution, rejected the agreement and called it a betrayal to the martyrs.

The agreement provides no assurance about the dissolution of Rapid Support Forces (RSF). The dissolution of this notorious militia, which is not a part of the regular armed forces and is led by the vice-president of the military junta, has been a demand of the protesters since the militia committed a massacre on June 3, killing more than a 100 protesters, raping dozens and injuring over 700.

The agreement instead calls for the militia to be brought under the command of the regular armed forces, and to be led by the country’s president who will be a military general for the first 21 months of the 39 month long transition period.

Furthermore, the agreement stipulates that members of the transition government, which will include members of or people appointed by the military junta, are granted immunity. None of them can be legally tried unless one of the government bodies, the legislative council, lifts the immunity with a majority vote.

67% of the legislative council will be appointed by the opposition group, which has come together in a coalition called the Declaration of Freedom and Change Forces (DFCF) to represent the protest movement. The remaining 33% of the seats will be occupied by parties outside of this coalition, excluding those which were a part of the coalition that supported the regime led by the ousted president Omar al-Bashir.

The DFCF will also appoint the prime minister, most likely on August 20. The appointed prime minister will in turn choose, on August 28, the remaining members of the cabinet or the council of ministers from the list of nominees provided by the DFCF. An exception to this will be the defense minister and the interior minister, who will be appointed by the military junta.

The sovereignty council (or the presidential council), which will be at the top of the power pyramid, will have 11 members, five of whom will be military officers appointed by the junta and five civilians appointed by the DFCF. The remaining one member will be a civilian with a military background who is agreeable to both sides. The president will be a military general for the first 21 months and a civilian for the remaining 18 months of the transition period.

In matters such as declaration of war, entering into joint military actions with foreign countries and allowing or removing of foreign bases in the country, this council will have the highest authority.

The SCP has argued that ceding such power to the military will be contrary to the aims of the transitional government set out in the Declaration of Freedom and Change, signing which the numerous political parties had come together to form the DFCF.

These aims include putting an end to wars the state is engaged in – internally and externally – realigning the country’s foreign relations and reorganizing the country’s economy in a way that benefits the majority of the population and not just the military elite.

“The budget for security and defense, which accounts for 76% of the state budget, as well as the bloody history of the wars of Darfur and Yemen, is something that renders the military unfit to rule the country,” SCP’s Central Committee has said in a statement.

The Sudanese Revolutionary Front (SRF) also criticized the agreement. The SRF is an umbrella organization of armed rebel groups and it had previously reached an agreement with the DFCF to chart a way forward to put an end to the civil war during the transition period.

“The Sudanese Revolutionary Front (SRF) presented a project to break Sudan’s historical structural imbalance to establish peace, but it has been disappointed,” an SRF leader said. They allege that the agreement “categorically rejected peace”.

In response to this agreement, the SCP has called for mass agitations with civil disobedience and political strikes. They reiterated that they will continue to struggle until all the militias are dissolved, till ousted president Omar al-Bashir and other military generals convicted of genocide and war crimes are handed over to the International Criminal Court, and a civilian government capable of accomplishing the aims stated in the declaration is formed.