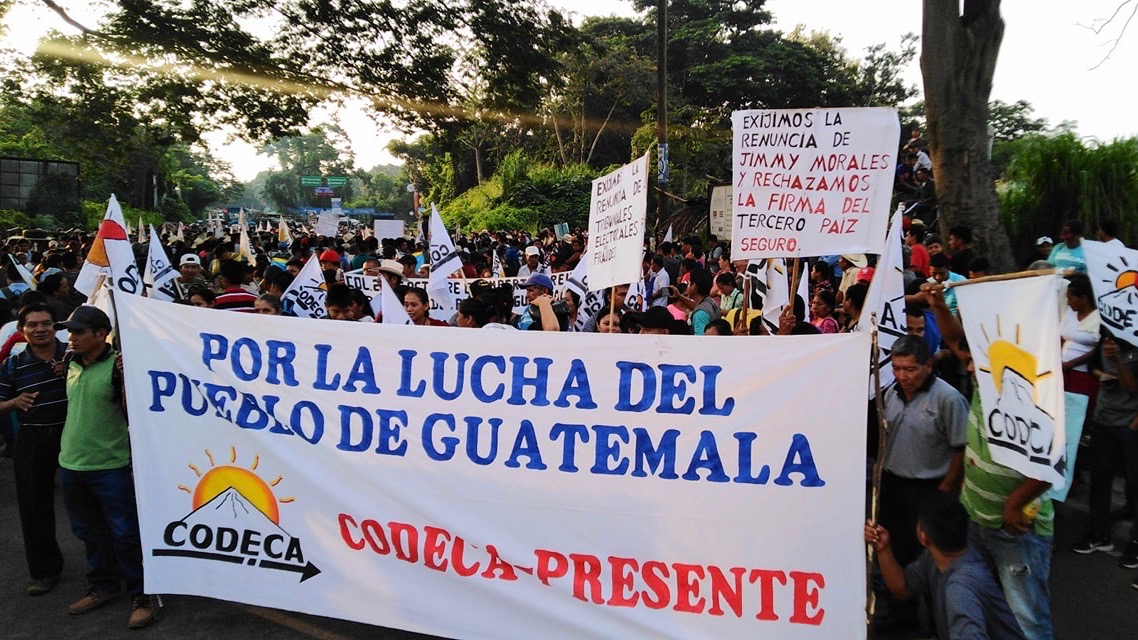 “For the struggle of the people of Guatemala, CODECA is present!” Photo: CODECA

On August 6, five days ahead of the second round of general elections in Guatemala, thousands of peasants across the country carried out a general strike principally to denounce the electoral fraud committed in the first round held in June and demand the annulment of the first round results.

The strike saw participation from several social movements and organizations and was organized the national peasant organization, the Peasant Development Committee (CODECA).

Over 22 massive mobilizations were carried out in different parts of the country, including the capital, Guatemala City. Several important roads and highways throughout the country were blocked by the protesters. #ParoPorLaConstituyentePlurinacional [StrikeForPlurinationalConstituent], #ParoNacional [#NationalStrike], etc. trended on social media to express the support for strike.

In addition to denouncing the June elections, protesters also rejected the immigration agreement signed on July 26 between the government of Guatemala and the United States. Protesters urged the Constitutional Court to immediately cancel the “Safe-Third Country” agreement recently signed between the current Guatemalan President Jimmy Morales and the US President Donald Trump.

The rampant corruption in Guatemala under President Morales was also denounced and calls were made for his resignation as well as the prosecution of corrupt politicians and government officials.

Another key demand was for the end of the criminalization of social protests and social leaders. Movements have requested the Public Ministry to investigate, arrest and punish all those responsible for the assassinations of social leaders and human rights defenders in Guatemala.

The striking peasants received support from the Indigenous candidate Thelma Cabrera of the Movement for the Liberation of People (MPL), who secured fourth position in the first round of general election and received just 3.5% of votes less than the candidate in second position.

The second round of elections between the center-right candidate Sandra Torres of the National Unity of Hope (UNE) party and the right-wing candidate Alejandro Giammattei of Vamos party is scheduled for August 11.