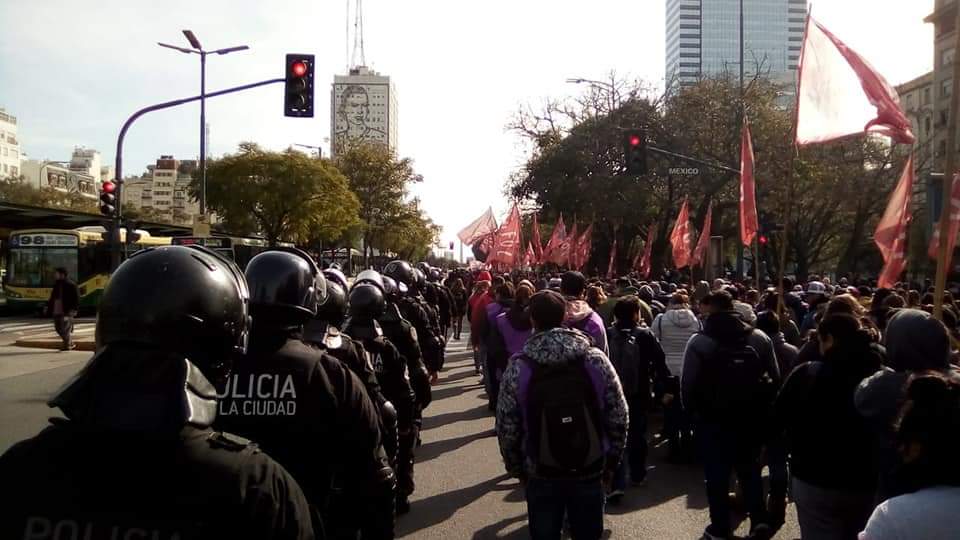 A special feature about these primary elections was that most of the provinces had advanced their elections for the election of provincial governors and legislators as well as municipal authorities. That is why, in a large part of the country, candidates for national legislators -deputies and senators- were chosen, on the basis of the presidential candidate.

The election yielded results that surprised everyone in the current government and the opposition. The difference of 15% between Alberto Fernandez and Mauricio Macri yield a result that will be difficult to reverse. It has given the FF formula* a very good chance of winning the election in October and ending with the 4 years of neoliberal rule and its consequences, even at the regional level, strengthening a more autonomous perspective with respect to imperialist policies on the continent.

At the district level, the Frente de Todos (formula Alberto Fernandez-Cristina Fernandez) won in all districts nationally except in the Federal Capital and in Cordoba, places where, despite the defeat, the difference was significantly narrowed in comparison to the previous election. In the most marginalized provinces of the country, the difference was enormous, reaching 70% in some of the places such as in the northeast of Argentina. The Frente de Todos also won in historically conservative provinces that supported the current government such as Mendoza or Jujuy. The province of Buenos Aires deserves a separate attention, where the candidate for governor for the Frente de Todos, Axel Kiciloff, received almost 50% of the votes and an 18% difference to the current governor María Eugenia Vidal. This is important in quantitative terms because it represents 40% of the total electoral roll, but also qualitative. The Vidal’s defeat is a very hard blow to those -with concentrated economic power- who saw her as a potential replacement figure. On the other hand, Axel Kiciloff, a possible governor, is objectively the most progressive candidate who has put Peronism in the main district of the country since the return of democracy there.

In addition, in the case of the Tercera Via** or third-way elections have been emaciated, given that Roberto Lavagn, the Minister of Economy and Production won only 8% of the vote. Also, the most radical options on the right have also had exiguous results.

A lot has been said about the role that material conditions play when it comes to building the subjectivity of people to decide their vote. The role that media plays in building the everyday reality of the people and how new communication mechanisms operate to cushion the neoliberal offensive in people’s spirits. While the behavior cannot be attributable only to how the material conditions affect, the choice of the people of Argentina has shown that they continue to have a very important centrality in decision-making in the political arena. It is one of the great weaknesses of the neoliberal model: its difficulties in building hegemony in long-term projects, as it cannot guarantee conditions for the reproduction of the working class. It is an undeniable fact that despite the huge deterioration in the quality of life of the majority of Argentinians, Macri won 32% of the vote. In this respect, we will need to see what strategy the multinational capital and the United States adopt in the coming months in order to try to reverse a situation that seems very difficult but having Argentina is fundamental to its strategy for the region.

From now onwards till October, we will have to follow very closely how the markets react and what is the strategy of the sectors with concentrated economic power. On the first day after the election, the dollar rose by 30%. Paradoxically a deepening of the economic crisis, although it may be a mechanism to destabilize the country after the election and almost imminent defeat of the government, the costs in terms of political capital are directly allocated to the current government, since this is what the recent elections demonstrated by making Mauricio Macri and his government primarily responsible for the situation in the country. The succession in December is still many months away, and the specter of misgovernance is no longer a problem of the future government, but of the current one. A scenario of heightened crisis and therefore of social conflict is a scenario that neither the current government nor the opposition seeks, but it something that Macri should be worried about more.

Some elements that may explain the overwhelming victory of the opposition are:

1. The economic crisis in which the country is submerged. The multinational capital used the national state during the years of Macri’s government as a place to do its million-dollar businesses, investing millions of dollars outside Argentina that were acquired from the loan with IMF; as well as with the policies of economic adjustment and emptying of the state. This had consequences. It led to the deterioration of all social and economic indicators such as the increase in poverty, unemployment and the rate of homelessness.

2. The government’s inability to expand its political base with new alliances. While they were able to incorporate a small fraction of Peronism with the incorporation of Miguel Ángel Pichetto as the vice president. They had strong internal disputes as witnessed with the intersection of concentrated sectors, the agriculture and the industrial chamber. This weakened its political framework, taking away its offensive capabilities.

4. The great ability to bring together almost the whole opposition into the Frente de Todos. The candidature for President of Alberto Fernandez, although he ran the formula to the center and was a nod to the sectors of economic power, allowed the incorporation of leaders such as Sergio Massa and others in the industrial sector. It also led to the incorporation of a vast majority of governors in the front.

5. High structuring of the working class and confluence almost entirely into the Frente de Todos. Both the organizations of the popular economy and the women’s movement were protagonists of the election campaign. From Ofelia Fernandez, a 19-year-old leading youth candidate, to the young women who flood the streets, or Juan Grabois who without being a candidate had a strong media appearance.

For the working class, the scenario should continue to be of great hard work. We must not fall for triumphant impressions. There is a need to strengthen a popular will in the prospect of a transformation that puts people’s rights and prominence on the agenda as fundamental axes of the dispute. Not only to move the election campaign towards October but also in the face of the new stage that opens with the government of Alberto Fernandez and Cristina Fernandez. Especially when the future government will necessarily be of adjustments and material changes in the life of the people, which will not be quickly perceived.

Today, in the popular sectors, this debate opens up more strongly than ever before that we, the popular sectors are going to have to navigate. We must pressurize the government that assumes to be conditioned by how the country has been left after four years of furious neoliberalism and a complex international context. It is necessary to navigate the transitional government without taking to the streets too many times, on the contrary, we must push for structural reforms that make it possible to crystallize new correlations of strength for the popular sectors. Surely the 12 years of progressive government have left some lessons and there are certain consensuses that we must continue to strengthen in which people’s mobilization and organization becomes fundamental to what is at stake at the stage that is coming up.

For the future government, it will also be a challenge to be able to keep together the political spaces that made up the Frente de Todos.