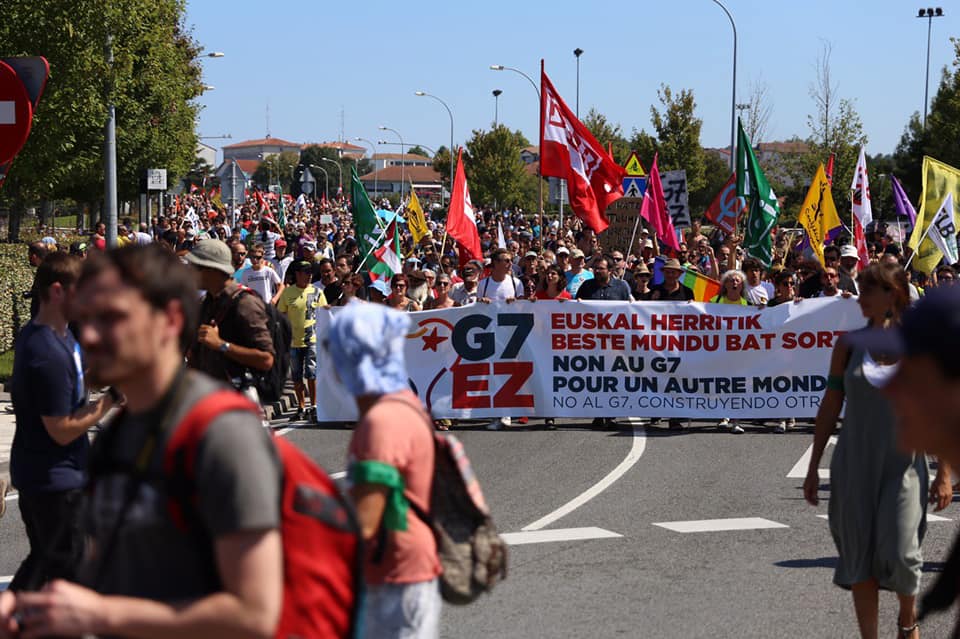 Activist groups G7-EZ and Alternatives G7, formed by anti-globalization groups, have called for protests against the G7 Summit.

On August 24, thousands of people took out out an ‘Alternative G7 protest’ in the town of Hendaye, France, to denounce the 45th G7 Summit that started in Biarritz on the same day. The protest was called by two umbrella groups, the G7-EZ and the Alternatives G7, formed by more than 50 anti-globalization groups, left-wing political parties, and unions. According to the groups, more than 15,000 people participated in the protest march. Denouncing the G7 group as elitist and accusing world leaders of causing inequality, the protesters called for urgent attention on climate action, the refugee crisis in the Mediterranean, the Israeli aggression on Palestinians, and the forest fires in the Amazon.

The Group of Seven (G7) consists of Canada, France, Germany, Italy, Japan, the United Kingdom and the United States. The summit is to continue till August 26, with delegations from the member countries as well as representatives from the European Union, Australia, India and Spain.

The protesters were joined by the Yellow Vests and the Basque activists. According to a Ruptly report, the French police used tear gas and blasts of water at the protesters, as they rallied in the city of Bayonne, roughly eight kilometers away from the host city of Biarritz. Prior to the summit, the French government had banned protests in Biarritz and surrounding towns.

In their call for mobilization against the G7 Summit, the G7-EZ claimed that “G7 brings together the seven Western economic powers (USA, Japan, Germany, France, UK, Italy, Canada). It establishes a hierarchy among people: those of great power, ideologically properly aligned on one side, and the other, marginalized. Since it has no legitimacy, the G7 has been challenged from the very beginning”.

“Supporting free trade, decommissioning, and budgetary austerity, the G7 states have been pushing social inequality to an extent that has never happened in the last hundred years. The G7 summits are a symbol of the dominance of the great powers of the West, made to channel the best commitments in the interests of capitalism. The economic and financial policies that are imposed on other people are decided within the framework of these commitments,” the G7-EZ added.

The 2019 G7 Summit is expected to be crucial for the forces of globalization as many issues, including the US president Donald Trump’s trade war on China, the US Policy on Iran, and the European Union – Mercosur Agreement, are on the table.