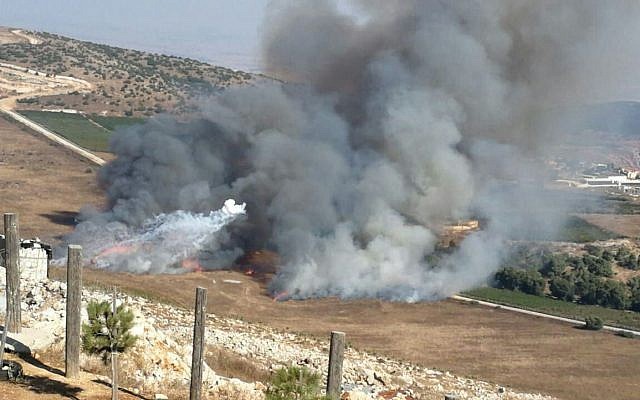 Hezbollah claimed one of its missiles hit an Israeli tank, killing 5 Israeli soldiers.

A heavy exchange of fire took place between Israeli and Hezbollah forces on Sunday, September 1. The firing took place after yet another Israeli drone entered Lebanese airspace on Saturday, August 31. According to the Lebanese armed forces, the drone dropped “some incendiary material” in the forests on the Lebanese side, leading to a fire.

Hezbollah forces responded by firing a number of anti-tank missiles into Israeli territory. It claimed one of its missiles hit an Israeli tank, killing 5 Israeli soldiers. Israel, however, has denied any casualties though it admitted that the missile had hit the tank.

The Lebanese army said Israel had fired at least 40 shells inside its territory. Lebanese prime minister Saad Hariri has said he had called US secretary of state Mike Pompeo and French diplomats to intervene and stop Israel from escalating the situation into a full-fledged war.

The UNIFIL (The UN Interim Force in Lebanon) has criticized both parties for violating the UN resolution 1701 passed after the 2006 war between Hezbollah and Israel. UNIFIL, which was established after 1978 to monitor the Israeli withdrawal from southern Lebanon, has remained there due to constant violations of the Lebanese border by the Israeli forces.

The current round of hostilities began on August 25 after two Israeli drones exploded in Beirut, with one of them hitting a Hezbollah media center in the city. The other drone exploded after Lebanese forces fired on it. On the same day, Israel attacked a Hezbollah camp near Damascus in Syria, killing two members of the militia.

Hasan Nasrallah, the chief of Hezbollah, had promised retaliation after the Israeli attacks on August 25. Sunday’s attacks were the first by Hezbollah after the 2006 ceasefire. In 2006, Israel and Hezbollah fought a 34-day long inconclusive war in which hundreds of people were killed. Israeli failed in its objective of crushing Hezbollah and had to end the conflict.

Israel has adopted a much more aggressive stance against Hezbollah recently. It is speculated that Israeli prime minister Benjamin Netanyahu’s election bid has something to do with it. Netanyahu had failed to secure a majority in the elections held in April this year. In the upcoming elections this month, he is facing a stiff change from his rival Benny Galtz. Netanyahu is hoping that his aggressive policy and rhetoric against Iran may attract the support of the ultra-rightwing in the country.