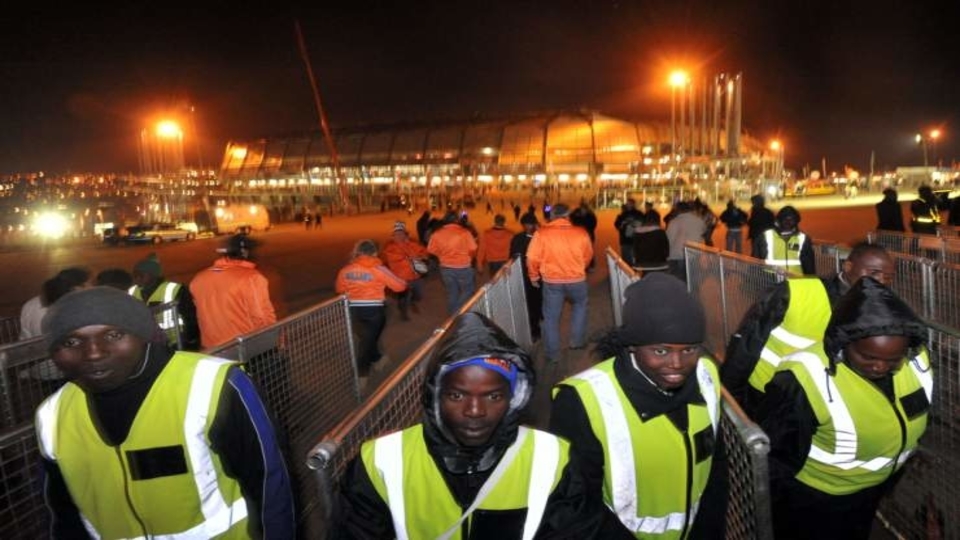 Nearly 150,000 security guards in South Africa may go on strike unless employers accept their demands during meetings with nine unions on October 1 and 2. The security guards have been demanding a hike in the minimum wage.

This meeting is part of a compulsory mediation process mandated by the Industry Protocol on negotiations, in which the aggrieved unions must participate before giving a strike notice. If no resolution is reached, the unions may thereafter refer the dispute to the Commission for Conciliation, Mediation and Arbitration (CCMA).

If the CCMA also fails to bring the parties to a settlement, it can then provide a certificate which clears the way for the unions to serve the employers with a strike notice. “As it is, we are preparing to lead workers to the mother of all strikes if bosses don’t put a reasonable offer on the table,” Zanele Sabela, spokesperson of South African Transport and Allied Workers Union (SATAWU), told Peoples Dispatch.

Security officers currently earn R4,377 (about USD 228), R4,891 (about USD 322) and R5,557 (about USD 366) in Grades C, B and A, respectively. These numbers only represent the wages before deductions have been made from them. After deductions, a Grade C worker might take home pay as low as R3800 (about USD 250), Sabela said, “It is hard to survive on that especially when one has children. What it means is that the circle of poverty is passed down from one generation to the next.. [S]ome take up loans to supplement their income and end up heavily indebted.”

The unions have said in a joint statement that, “we are even prepared to consider any.. progressive offer that can ensure that such a minimum salary could be realized within a three-year period at least.”

Since the current wages are “extremely insufficient even to cover the basic daily needs”, the unions are also raising the “demand for a hospital cover where employers will be compelled to make at least 60% contribution towards hospital benefits, which will enable Security Officers to have direct access to better health care facilities.”

Meanwhile, the employers’ offer for a hike has been as low as 1.1%. They have also not committed to the provisions for healthcare, as demanded by the unions.

With an unemployment rate as high as almost 30%, the crime rate in South Africa is also very high, and multiple surveys indicate that crime is often cited by South Africans as their second biggest concern after unemployment itself.

“Statistics show that the security industry employs twice as many officers than the police and national defense force combined. Security officers definitely assist in combating crime through technology, guarding, response etc. This industry is highly regulated, with more than one government department overseeing it. The work of security officers is often dangerous and that is why we find employers’ latest offer of a 1.1% increase an insult”, Sabela explained.

“Labor has outrightly rejected.. [this offer] which equates to [a hike of] mere R0.23 per hour for a Grade C Security officer”, the joint statement by the nine unions read, adding that, “this can be nothing other than an unfortunate insult to workers.”

The unions had officially put forth their demands on July 23, following which negotiations with the employers, under the auspices of Industry Bargaining Council, started from August 15.

“Since then, we have had at least four rounds of negotiations, wherein it became absolutely clear [that] from the beginning that employers were not prepared.. to participate and play a meaningful role in substantial improvement of the living standard of a life of a Security Officer,” the unions have complained.

However, they hope that the meeting on October 1 and 2, will see the employers “come well prepared, with a senior delegation”, unlike the previous unfruitful rounds of negotiations held over the past month, where those in “very junior positions in their companies with no executive authority whatsoever,” were sent as the employers’ representatives.

Should the current “posture and attitude displayed by employers” persist, the unions warn, “that the battle is on the horizon and we can call upon each Security Officer in the country, in every shop, mine-shaft, power station, mall, factory, bank, building etc. to be combat-ready for a protracted battle that lies ahead.”