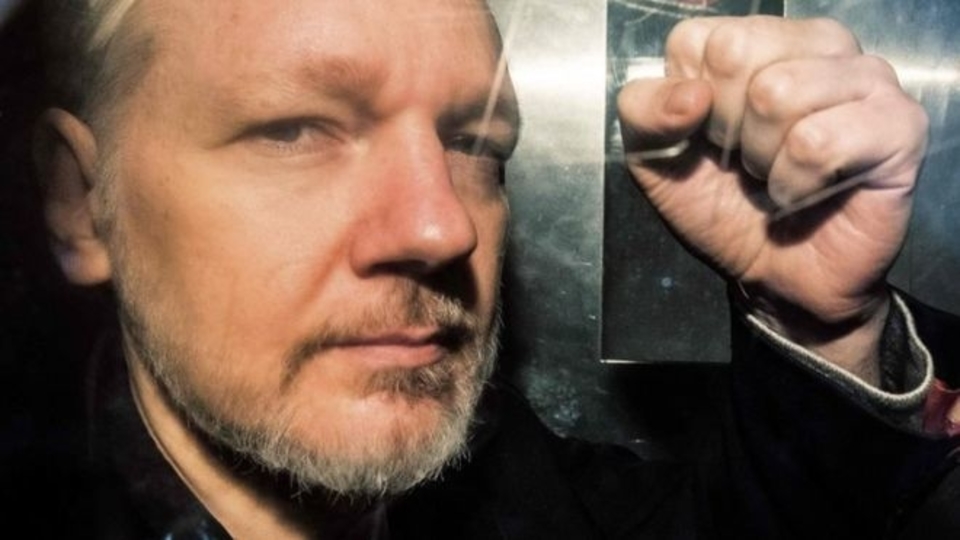 I have only ever known Julian Assange in detention. For nine years now, I have visited him in England bearing Australian news and solidarity. To Ellingham Hall, I brought music and chocolate, to the Ecuadorian embassy I brought flannel shirts, Rake, Wizz Fizz and eucalyptus leaves, but to Belmarsh prison, you can bring nothing—not a gift, not a book, not a piece of paper. Then I returned to Australia, a country so far away that has abandoned him in almost every respect.

Over the years I have learned to not ask, ‘How are you?’, because it’s bloody obvious how he is: detained, smeared, maligned, unfree, stuck—in ever-narrower, colder, darker and damper tunnels—pursued and punished for publishing. Over the years I’ve learned to not complain of the rain or remark on what a beautiful day it is, because he’s been inside for so long that a blizzard would be a blessing. I’ve also learned that it is not comforting but cruel to speak of sunsets, kookaburras, road trips; it’s not helpful to assure him that like me and my dog, he will find animal tracks in the bush when he comes home, even though I think it almost every day.

It is the prolonged and intensifying nature of his confinement that hits me as I wait in the first line outside the front door of the brown-brick jail. At the visitor center opposite, I’ve been fingerprinted after showing two forms of proof of address and my passport. Sure to remove absolutely everything from my pockets, I’ve locked my bags, keeping only £20 to spend on chocolate and sandwiches. Despite the security theater that follows, the money gets nicked at some point through no fewer than four passageways that are sealed from behind before the next door opens, a metal detector, being patted down and having my mouth and ears inspected. After putting our shoes back on, we visitors cross an outdoor area and are faced with the reality of the cage: grey steel-mesh fencing with razor wire that is about 4 meters high all around. I hurry into the next building before going into a room where thirty small tables are fixed to the floor, with one blue plastic chair facing three green plastic chairs at each.

He sits on one of the blue plastic chairs.

I hesitate now, as I always do, to describe him. That, too, I’ve learned: it’s a protective impulse against the morbid fascination of some supporters, and against others who delight in his suffering. His health was already deteriorating severely when he left the embassy. He confirms that he is still on the health ward, though he hasn’t seen specialists, which is obviously necessary after what he’s been through. He explains that he is transported in and out of his cell, where he is kept for twenty-two hours a day under so-called ‘controlled moves’, meaning the prison is locked down and hallways are cleared. He describes the exercise yard. It has writing on the wall that says, ‘Enjoy the blades of grass under your feet’, but there is no grass, only concrete. There’s nothing green, just layers of wire mesh above his head, and concrete all around.

After such extreme isolation and deprivation of human company, of course he is happy to see friends. He cracks hardy, meeting me halfway, grinning at my jokes, patient with my awkwardness, nodding and encouraging me to remember half-memorized messages. I jump up to get supplies so that he can catch up with another friend. It is then that I realise I don’t have any money, so I go back for theirs. As I return to the line, a woman in a hijab says, ‘He doesn’t belong in here. He shouldn’t be here. We know about things because of him. He has a lot of supporters in the Muslim community’. This sense and solidarity help to calm me down after the ordeal of entering this cold place; even here, there is warmth, friendship, kindness. I’m so grateful to that woman and return with a tray of junk food to report what she’d just said, which shows once again that a lot of people can see through the intensive media manipulation Julian has been subjected to, and they have a sense of humanity, common sense, empathy and compassion that cut through.

Julian gets two social visits a month; the last one was three-and-a-half weeks earlier, so we speak quickly, exchanging as many words, messages and ideas as we can. There have never been silences between us and, fuelled by coffee alone until the wee hours, we have often spoken at the same time, answering while the other talks, but the noise in the room is too loud for that. He often needs to close his eyes to marshal his train of thought, and then we are off again, so very conscious of slow jail time speeding up during visits, which are very loud—another thirty prisoners are seeing their friends and family, toddlers are trying to be heard, and presumably microphones and cameras are straining to hear what is being said as much as I am.

The UN expert on torture who also visited him at Belmarsh said that Julian exhibits the effects of prolonged psychological torture. He has been tortured by indefinite detention, and the prospect of extradition to the US for a show trial, where he would face 175 years in jail—an effective death sentence—is without doubt a form of torture. Still, I’m struck over and over again by the times he takes the conversation away from him and into principles and the broader implications of his case: “This isn’t just about me, Flick; this is about so many people, every journalist in the UK. If I can be grabbed, just another Australian working in London, any journalist or publisher can be grabbed for simply doing their jobs.”

A few weeks earlier, at a Greens event in Sydney, I lost my temper on a panel with someone who had similarly said, ‘This isn’t about Julian; this is about journalism’. I spat back, ‘Well, when is it going to be about Julian, too? When he’s dead? When they’ve killed him? When do you reckon it can be about an Australian publisher who’s in a UK cage being punished by the US for publishing the truth about wars in Iraq and Afghanistan?’

It’s difficult to imagine, even for nine minutes, the choices made over the last nine years—the snap decisions, bookshop visits, bus trips, gardens dug, gifts wrapped—but almost all of them he can’t relate to except as a distant memory. This radically changes normal conversation with Julian. Nothing is normal; every step of the legal and political process over the last nine years has been anomalous, and the context and pretext too have been manipulated by any number of strategies, some of which have been leaked, to infect and affect the perception of him, his work and his supporters. This radically changes normal conversation about him, even with some of my most thoughtful friends.

I hug farewell a much thinner man than the one I formerly knew, and a different person disappears into the hallway when the visit is over, although both of our left fists are raised, as usual.

On our way home from the visit, a call came through to advise that a technical hearing had been unexpectedly brought forward to the following day. At this ‘technical hearing,’ the district judge pre-emptively ruled out bail. But it wasn’t a bail hearing, and Julian’s lawyers had not even had a chance to apply for bail, but the judge ruled it out without hearing any arguments or facts. When the judge asked if he understood, Julian said, ‘Not really. I’m sure the lawyers will explain it’.  He didn’t understand because this was incomprehensibly irregular, again, but also because he has no access to court documents and legal files in order to help prepare his case.

On Monday, September 23, Julian completed his sentence for breaching bail and will be held by the United Kingdom only so that the United States can try to extradite him. That is to say, he will have served his prison sentence for committing the crime of applying for, and receiving, political asylum. Ecuador granted asylum because it was obvious that the United States planned to prosecute him for publishing. Among many other things, he is being prosecuted for publishing the real numbers of civilians who have been killed in Iraq and Afghanistan—thousands of people who were the victims of bombings, maiming and torture. He has also published information about journalists killed by Western forces, including José Couso, the Spanish journalist killed in Iraq by US troops (the Spanish were then pressured by the United States not to argue for an investigation). That’s why they want to lock Julian away: to set an example, and so that they can do it again in the future without being held accountable.

So Julian was right all along. He sought asylum from the very scenario he now faces: extradition to a US show trial and an effective death sentence for publishing information in the public interest. The charges’ extreme nature have muted the vitriolic hatred reserved for Julian, though not the pop-psychology pronouncements on his personality (a personality I happen to enjoy and love, as does Noam Chomsky, Daniel Ellsberg, Slavoj Žižek, Patti Smith, P. J. Harvey, Scott Ludlam, Ken Loach and many other diverse thinkers and activists.) Now, the New York Times, the Washington Post, the Wall Street Journal, and the Guardian make disparaging remarks about Julian’s personality before expressing grave concern about the charges he faces, because indeed, as UK Special Envoy on Media Freedom Amal Clooney stated at the June Global Conference for Media Freedom, they  ‘criminalize common practices in journalism’.

So, finally, publishers and journalists around the world understand that their fate is entwined with Julian’s, who has no hope of a fair trial in the United States. He is charged under the Espionage Act, the first ever use against a publisher, where no public-interest defence is allowed. This is why the UK judge and home secretary should not extradite Julian Assange to the United States. Voices are becoming louder as the realization dawns that if this extradition goes ahead, any national-security or investigative journalist in the United Kingdom or anywhere in the world can be grabbed, setting a terrible precedent for all journalists and publishers.

In the United States, Trump’s Department of Justice is attempting to coerce Chelsea Manning and Jeremy Hammond into testifying against Julian in a secret grand jury process where there is no judge—an institution that has been abolished in every other country besides Liberia. While they, too, are in prison indefinitely, Manning and Hammond are resisting. Where will this stop? It needs to stop with Julian walking out of Belmarsh, and then out of Sydney Airport, so that his eyes, damaged by so many years of being inside, might finally adjust to find wombat and wallaby trails here at home. Until then, we have to keep fighting his extradition, calling on the United Kingdom to resist, and for the Australian government to bring this citizen and publisher home.

(This article was first published on arena.org.au)