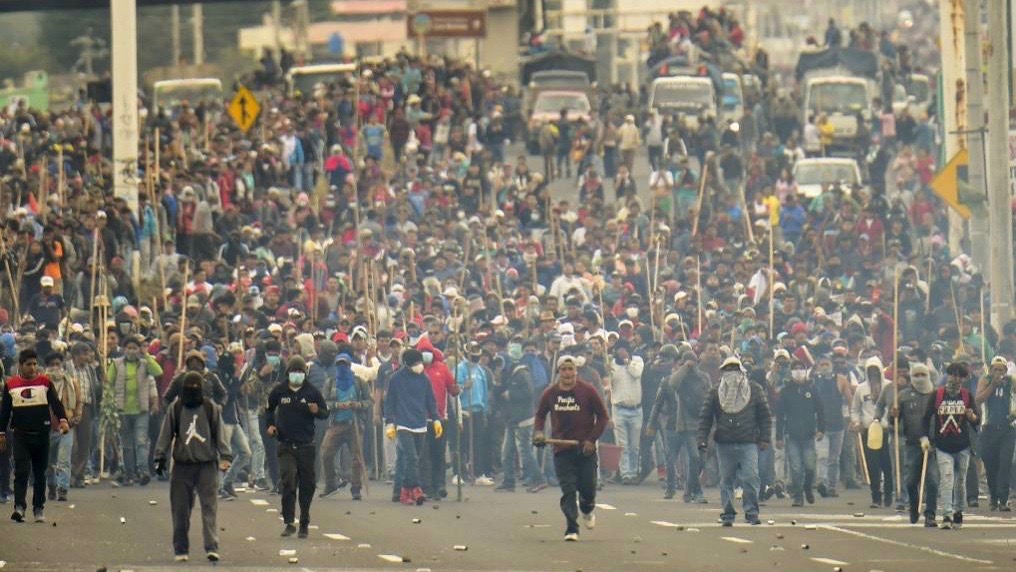 Thousands mobilized in Quito today against the economic policies announced by Lenín Moreno.

Ecuadorian president Lenín Moreno, on Monday, October 7, announced the shifting of the seat of government from the capital Quito to Guayaquil. This move, which was made possible due to the state of emergency he declared on October 3, came even as thousands of Indigenous people gathered in the capital against his neoliberal reforms. Many more from all parts of the country are on their way to the capital.

In the announcement aired on national TV Moreno also condemned the multitudinous mobilizations against his proposed neoliberal economic measures stating they are not “manifestations of discontent. The looting, vandalism and violence show that there is an attempt to break the democratic order.” He also reaffirmed his position on the controversial neoliberal economic measures and said there is no turning back.

Indigenous organizations along with trade unions, social movements and peasant organizations marched towards the Candolet Palace, the seat of government in Quito, which has been cordoned off with a heavy deployment of military personnel, barbed wire, barricades and military tanks.

Protesters in Quito were met with extreme violence by the police and military which has been characteristic of the state’s response to the protests. Organizations reported that in the past five days of protests, at least 477 people have been arrested, three protesters have been killed and at least 100 have been injured. Organizations have condemned the use of tear gas, rubber bullets and even live bullets by the Ecuadorian police and military.

The communications collective, Nuestroamericano, posted a video today which shows members of the national police throwing three youth off a bridge. Their condition is still unknown but it is likely that they sustained grave, if not fatal, injuries.

On October 6, 35 year-old Raúl Chilpe died after being run over by a car in the Azuay province where a demonstration and roadblock were being carried out. On the same day, late in the evening, the Indigenous community in La Esperanza town in the Imbabura province was attacked by the national military and police forces. They reported that the military forces violently entered houses, threatened the inhabitants and arrested seven people. The Confederation of Indigenous Nationals of Ecuador (CONAIE), one of the biggest social organizations in the country, condemned the repressive actions of the state armed forces.

In response to the brutal repression by the security forces and the State’s lack of conscience in understanding the nature of social demands, CONAIE announced on October 5 “a state of exception” in Indigenous territories in response to the state of emergency announced by Moreno. The CONAIE warned that it would apply the Indigenous justice system to “military and police officials who approach Indigenous territories” to suppress their protest.

The organization also condemned misinformation spread by certain sections that Moreno was backing their protests. They declared that any politician that seeks to take advantage or coopt their mobilization would be tried with indigenous justice.

Since October 2, social movements, trade unions, peasant organizations, fishing communities, neighborhood organizations, students, Indigenous and political organizations, have been demonstrating across Ecuador against economic measures announced by Lenín Moreno. Organizations in every corner of Ecuador have been mobilizing on the major highways and roads and paralyzing almost all administrative and economic activities.

Yesterday, October 7, the minister of energy and non-renewable natural resources announced that operations in three oil fields located in the Sucumbios and Orellana provinces were suspended due to protests and road blockades. They also declared that the armed forces will be deployed to “guarantee the security” at these oil fields.

Last week, on October 1, Moreno announced the elimination of four decades-old subsidies on petroleum and diesel, the restriction on the advance payment of income tax and a number of labor reforms, based on agreements made with the International Monetary Fund (IMF) in exchange for 4.2 million USD in aid. The withdrawal of fuel subsidies saw an immediate 123% increase in the price of fuel.

The measures angered all sectors of Ecuadorian society as the elimination of fuel subsidies impacts all aspects of life. Transportation workers joined the mobilizations on the 2 and 3, but by Friday, October 4, the transport federations called off their strike and protest actions which likely means that they reached an agreement with the government.

Another national strike has been called for on October 9 by a number of social, Indigenous, students, peasants and political organizations and trade unions to denounce the brutal police repression of social protests and to reject Moreno’s economic measures.

The complete silence of the United States, European countries, Latin American conservative governments and the Organization of American States with regards to the massive protests rocking Ecuador and the disproportionate use of force by the government is noteworthy. These same countries and entities have been extremely vocal and active when it comes to matters of Venezuela and calling for the overthrow of Nicolás Maduro, yet they remain steadfast in their support to Moreno. The best example of this hypocrisy is the tweet by far-right Venezuelan opposition leader and self-proclaimed ‘interim president’ Juan Guaidó who wrote on October 7: “While President Moreno works to maintain and strengthen the Republic and institutions of Ecuador, a group financed by the accomplices of Maduro in America, taking advantage of the most vulnerable looks to, take away the stability of the country. In solidarity with Ecuador”.